The wildfires have created columns of smoke as tall as 14,000 miles. 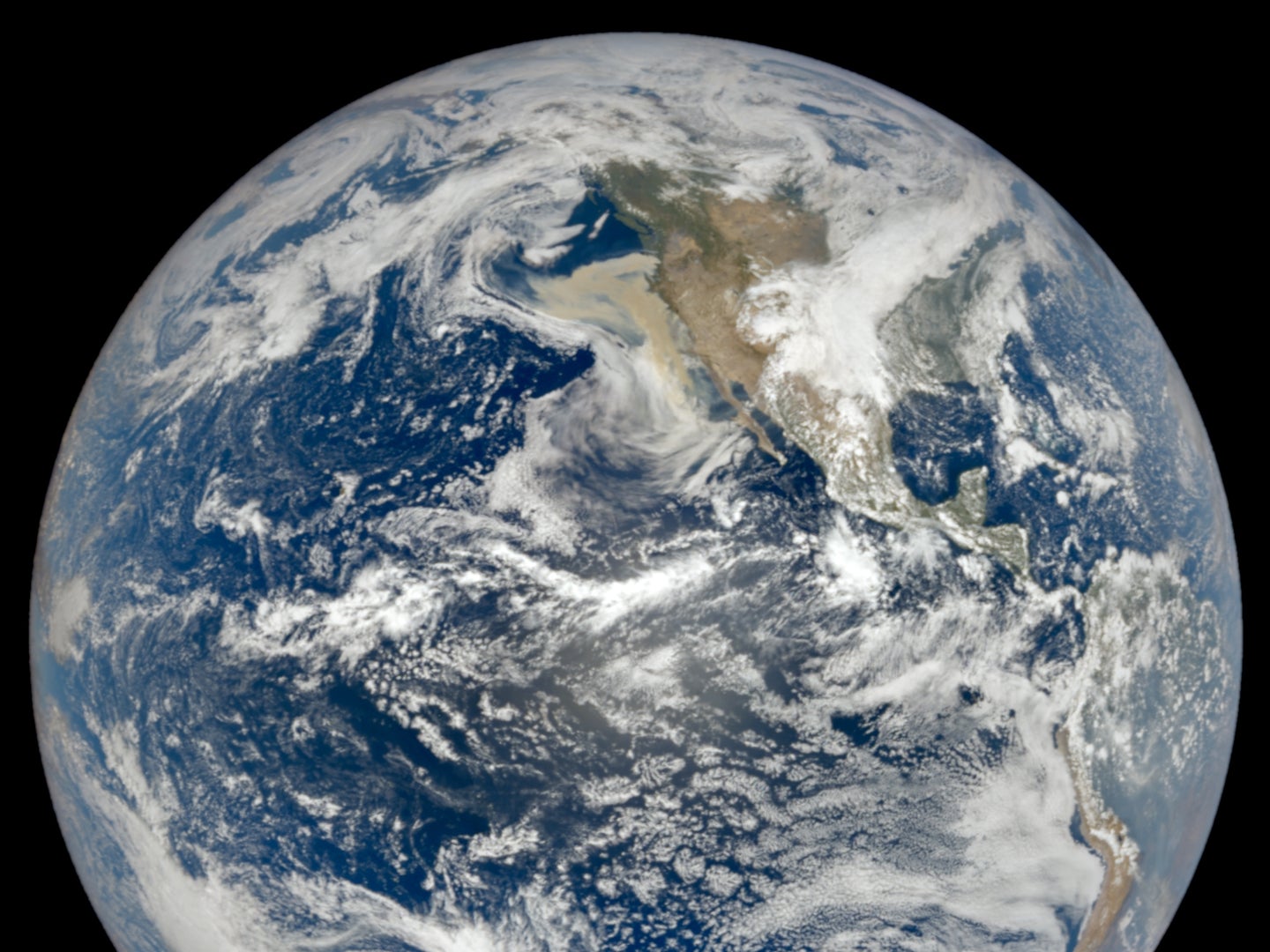 The photo was taken by NASA’s camera EPIC, which takes pictures of the planet every two hour from NOAA’s satellite DSCOVR. You can spot the plume of wildfire smoke off the west coast of the United States. NASA Earth Observatory images by Lauren Dauphin
SHARE

Last week, the San Francisco Bay Area woke up to a saturated-orange sky. The smoke particles from the wildfires raging all over the West Coast since August blocked the blue light from the sun, creating the orange and red-tinted spectacle for our human eyes. But a day before hundreds shared apocalyptical-looking images on social media, a NOAA satellite had already captured the devastating scale of the wildfires.

The photo shows a large and dense mass of smoke all over the US’ West Coast, all the way down from Oregon to Southern California. NASA’s Earth Polychromatic Imaging Camera (EPIC) camera took the image on September 8th while orbiting the Earth on the DSCOVR satellite operated by NOAA. The ‘wall of smoke,’ as NASA called it, was so thick that the camera circling the Earth nearly a million miles away had no problem in documenting it.

Many factors are driving the violent expansion of this years’ wildfires. High temperatures that climbed to three-digit numbers even overnight in July and August, the hottest summer ever recorded that left plenty of dry vegetation ready to burn, fire-suppression practices, and strong winds created the perfect conditions for the fires to spread. Human-induced fires account for the majority of the fires—95%. Still, a lightning storm of 11,000 lightning strikes struck the San Francisco Bay Area in mid-august and ignited over 367 new fires, says Cal Fire’s division chief Jeremy Rahn in a press release.

And despite the reluctance of President Donald Trump to say so, scientists and officials from Washington and California have stated that the fires are a result of the climate crisis. Lynne Tolmanchoff, from Cal Fire, told PBS that two decades ago, firefighters worked between mid-July to early October. Now, the season starts around May and routinely extends to November—sometimes even stretching to December.

The “wall of smoke” is slowly dispersing, recent images show, and it has now started to move over the rest of the country. But the fires are not slowing down. A week after the image was taken, things have only gone worse on the West Coast. This seasons’ fires have consumed 4.6 million acres across ten states, according to the National Interagency Fire Center (NIFC). By September 14th, Portland, Seattle, and San Francisco had the worst air quality in the world, according to the air quality tracking group IQAir (Portland, Vancouver and Seattle are currently still on top of the list.)

California is by far the most affected state. The wildfires have already burned 3.2 million acres and are still going strong with 28 active fires, according to the California Department of Forestry and Fire Protection, also known as Cal Fire. 25people have died, and 4,200 buildings have turned to ash. According to Cal Fire, we’re not even in peak fire season. The strong winds and low humidity will continue to feed the fires, particularly in the northeast part of the blaze.

In Oregon, ten percent of the state’s 4.2 million people have received orders to leave their homes. The towns of Detroit, Vida, Talent, Blue River, and Phoenix are “substantially destroyed,” said Kate Brown, Oregon’s governor. “It could be the greatest loss in human lives and property in our state’s history,” Brown said in a press conference.

Meanwhile, 15 fires have destroyed more than 681,000 acres in Washington. Last week, in just 24 hours, the fires burned 330,000 acres, which is more than all the area that typically burns between the Fall and Spring fire season, explained Gov. Jay Inslee. The fires destroyed 80% of the buildings of Madlen, and a small child died trying to escape the flames in Okanogan County. “This is an unprecedented and heartbreaking event,” Inslee said last week.

The official death toll for the entire fire is now 35 people, and the high-speed winds that are fueling the fires are expected to continue in the following days.