This triceratops cousin suffered from osteosarcoma, just like many humans do

Though the world has changed a lot in 77 million years, cancer might still look pretty similar. 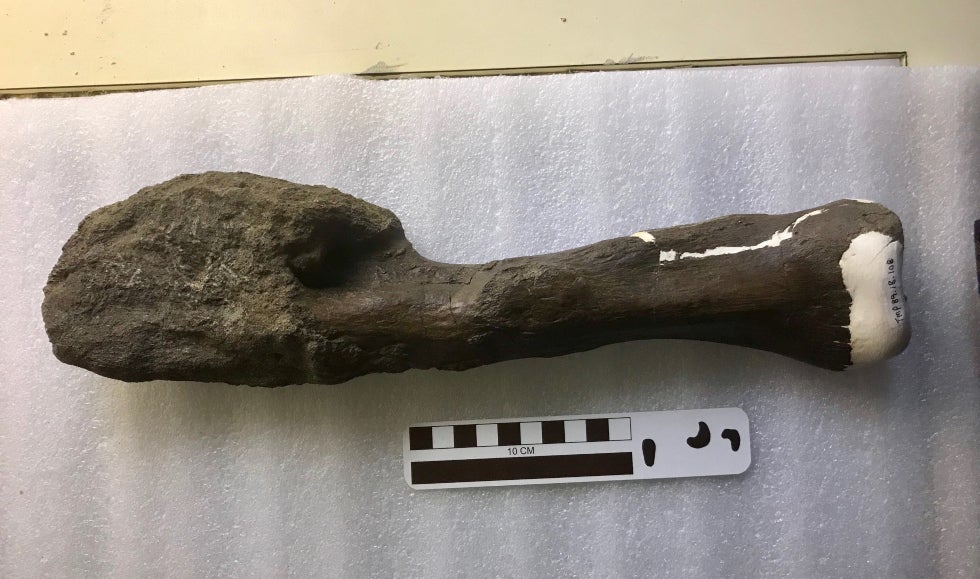 Cancer follows a fairly standard protocol: Cells multiply out of control until they take over key organs necessary for survival. Creatures across the animal kingdom from humans to birds to reptiles can all get cancer, and, as researchers report this week, so can dinosaurs that roamed the Earth millions of years ago. Knowing more about how and why the mysterious forms in these ancient creatures could help doctors prevent more animals from meeting the same fate.

Scientists from the Royal Ontario Museum and McMaster University have discovered that an ancient triceratops-like beast that lived over 75 million years ago developed an osteosarcoma tumor in its leg bone. They published their new findings in The Lancet last week.

The team of scientists, including health experts and paleontologists, had been searching for human-like diseases in ancient dinos by digging through old fossils at Canada’s Royal Tyrrell Museum and stumbled upon the fibula of a Centrosaurus apertus that had scientists had uncovered in Alberta thirty years ago.

Paleontologists at the time had diagnosed the malformed fossil as an oddly healed fracture. But a new team of researchers took a closer look, examining and running tests as they would if the bone belonged to a human patient. That meant coming up with a list of possible diagnoses, and eventually, biopsying slices of the bone under a microscope to take a closer peek.

“We had to do something called destructive analysis which is exactly what it sounds like,” says Seper Ehktari, an author of the study and orthopedic surgery resident at McMaster University.

With this closer examination, Ehktari and his team realized the destruction of the bone was caused by osteosarcoma which still impacts some 800 to 900 new human patients in the US yearly. Ehktari adds that it’s not only humans that get this disease, but other mammals and creatures more closely related to dinosaurs like chickens and cockatoos.

Jennifer Anne, a paleontologist at the Children’s Museum of Indiana not involved in the study, notes that this is not the first spotting of cancer in dinosaurs. There’s been a handful of known cases (a duck-billed dino has also had signs of bone cancer). However, it does open up a whole new group of dinosaurs to novel discoveries regarding cancer that we might’ve missed before.

“We are also gaining a lot more knowledge about cancer in non-human animals,” Anne says. “That information coupled with better access to new technology like CT scanners that can scan dense fossils means paleontologists are going to get better at identifying and, to the best of their ability, diagnosing paleopathologies.”

Beyond just satisfying our curiosity for the lives of the massive dinosaurs that once roamed our current-day backyards, discovering more about cancers in their ancient forms could help us diagnose and fight them in today’s creatures, including in us humans. Osteosarcomas in humans typically develop when people are growing at a super-fast rate, typically around age 10 to 20, says Ehktari.

Seeing as dinosaurs also grow rapidly from tiny babies to massive beasts is another reinforcement to the theory that rapid growth might have something to do with the rapid reproduction of cells, Ehktari says. After all, he adds, the more cells are growing and reproducing, the more likely it is that a handful of them could “go rogue.”