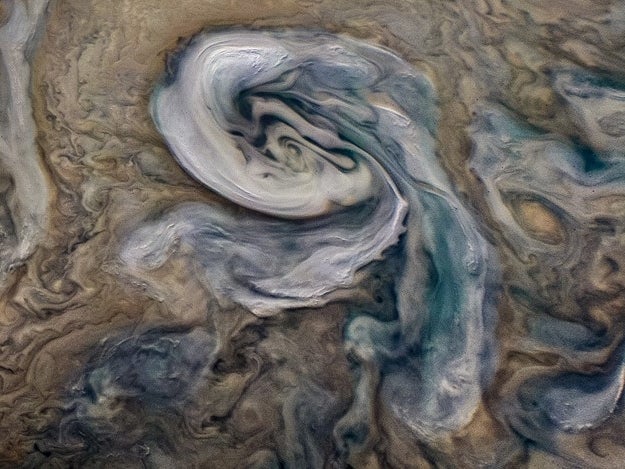 These storms are thought to contain a kind of water-ammonia hail ('mushballs') specific to Jupiter's atmosphere, which drags the ammonia down into the deep atmosphere and may explain the presence of shallow lightning flashes. NASA/JPL-Caltech/SwRI/MSSS/Kevin M. Gill
SHARE

The forecast for Jupiter’s weather is cloudy with a chance of “mushballs.” The swirl-shrouded planet is host to violent storms that have raged across its surface for hundreds of years, clocking wind speeds stronger than a Category 5 hurricane on Earth. Now we can add another phenomenon to the planet’s laundry list of weird meteorological events—ammonia-laden hail dubbed “mushballs” that are formed during its violent thunderstorms.

Ever since Voyager 1 first took pictures of Jupiter in 1979, we’ve seen massive jolts of energy deep beneath the planet’s cloud tops. But according to Heidi Becker, a physicist at NASA’s Jet Propulsion Laboratory, spotting lightning in the upper reaches of the gas giant’s atmosphere has proven challenging—it wasn’t clear if we weren’t able to see lightning with our current tech, or if the lightning simply didn’t strike there.

Now, observations made by NASA’s Juno orbiter and outlined in a trio of papers published in Nature and JGR Planets last week have revealed that Jupiter’s cloud tops are frequently active with lightning as well—and it’s like nothing we see on Earth.

In the four years since NASA’s Juno spacecraft went into orbit around Jupiter, it has slowly been coaxing the king of all the planets into revealing its deepest secrets. Becker, lead author of one study, and her team turned Juno’s navigation camera—typically used to peer at dim sources of light like stars to pinpoint the spacecraft’s position—towards Jupiter’s dark side in 2018. Researchers saw clouds crackling with electricity like never before.

“Juno is yet again pushing back against the prevailing view of Jovian meteorology,” says Leigh Fletcher, a planetary scientist at the University of Leicester who was not involved with the study. “The use of Juno’s stellar reference unit to detect these small lightning flashes shows how the combination of sophisticated instruments and spacecraft can lead to serendipitous and unexpected discoveries.”

It was thought that, as on Earth, Jupiter’s lightning only occurred in thunderstorms where water exists in all its phases—ice, liquid and gas. And yet, researchers found lightning in the upper reaches of Jupiter’s cloud tops where it is far too cold for liquid water.

That’s because the planet has a workaround. Instead of pure liquid water, researchers found that this strange lightning could be caused by liquid ammonia acting as an “antifreeze” that keeps water in those upper atmospheric clouds from freezing entirely. A strange liquid brew of two parts water and one part ammonia gas (Becker says it’s kind of like Windex) collides with pure water ice particles and builds up electric charge.

“It’s a new way of creating lightning on Jupiter that nobody realized was possible until Juno took these pictures,” Becker says.

Those ammonia water droplets could actually seeds for the so-called “mushballs,” researchers theorized. Water ice crystals would adhere to these seeds and become slushy, snowball-like amalgamations of ammonia-water liquid and pure water ice before powerful thunderstorm updrafts lift them high into the sky. As those objects are thrown around in updrafts and downdrafts, they should gather even ice and grow like a snowball rolling down a hill. Eventually, these “mushballs” would get so big, even updrafts couldn’t hold them up anymore. Then, these slushy snowballs should drop deep into Jupiter’s interior, creating mushball hail.

In addition to explaining high-altitude lightning, the mushball theory fills in other gaps in our Jupiter knowledge. Ammonia is plentiful near Jupiter’s equator but, according to Becker, there are small pockets where ammonia is strangely missing. Combining their newfound knowledge of both the shallow lightning and mushballs enabled the NASA team to solve this mystery. Becker and her team now think these “mushballs” could behave like cloaking devices for the ammonia.

“The solution is very simple and elegant with this theory: When the water and ammonia [together] are in a liquid state, they are invisible to us until they reach a depth where they evaporate—and that is quite deep,” Scott Bolton, lead researcher for Juno and co-author of the new studies says in a press release.

So far, the “mushball” model remains theoretical. Becker and her colleagues hope more detailed observations of Juno’s atmosphere will narrow the gap between the model’s predictions and the observational data. As Becker points out, understanding the Jovian atmosphere is a window to how weather on other planets churns both within and outside our solar system.

“Jupiter is another laboratory that we have besides Earth that enables us to understand how things work in different worlds,” Becker says. “For over 40 years, astronomers thought Jupiter’s thunderstorms happened the same way they happen on Earth and now we’re seeing something entirely different. There’s always something to learn.”