These black holes collided so hard they made space-time jiggle

It’s the largest merger ever detected. 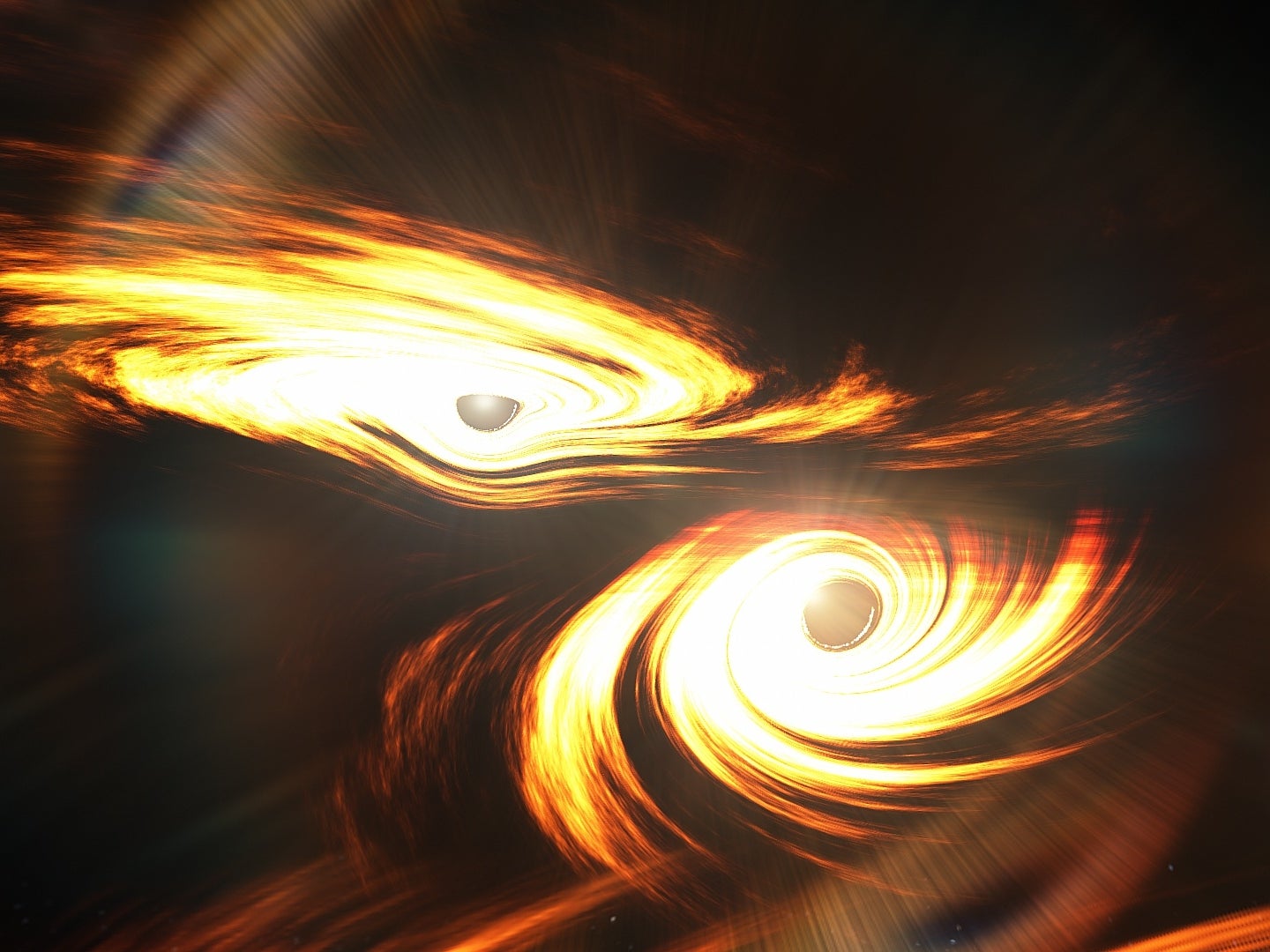 Some 7 billion light-years away, two black holes swirled closer and closer together over eons until they crashed together with a furious bang, creating a new black hole in the process. This disturbance in the cosmos caused space-time to stretch, collapse, and even jiggle, producing ripples known as gravitational waves which reached our Earthly abode on May 21st of 2019.

Using LIGO (Laser Interferometry Gravitational-wave Observatory), a pair of identical, two-and-a-half-mile-long interferometers in the United States, and Virgo, a roughly two-mile-long detector in Italy, an international team of scientists announced Wednesday that they had detected this cosmic collision, and it’s racking up superlatives: it’s the biggest, the farthest, and the most energetic black hole merger observed to date. This is also the first definite sighting of an intermediate-sized black hole, clocking in at about 142 times more massive than the Sun, forged from a black hole merger. The findings were published on Wednesday in a paper detailing the discovery in Physical Review Journals and another detailing the implications of the event in the Astrophysical Journal Letters.

The merger signal, called GW190521, lasted only a tenth of a second—but scientists immediately realized it was extraordinary in comparison to the low chirp of two colliding black holes LIGO detected in 2015, which confirmed Einstein’s ineffable notions on space-time. “It’s the biggest bang since the Big Bang that humanity has ever observed,” says Alan Weinstein, an astronomer at the California Institute of Technology who was part of the study. It could offer clues as to why the Universe looks the way it does.

Computer algorithms analyzed the signal, ultimately allowing scientists to pinpoint the masses of the merger and just how much energy was released. The two progenitor black holes weighing in at about 66 and 85 solar masses merged into a black hole of 142 Suns. The remaining eight solar masses would have been converted into gravitational wave energy.

Up until now, scientists have been able to detect and indirectly observe black holes in two different size ranges: stellar-mass black holes, which measure from a few solar masses up to tens of solar masses, and supermassive black holes that range from hundreds of thousands to several billions of times the mass of our sun. However, astronomers that detected GW190521 witnessed the birth of a special breed of black hole: an “intermediate-mass” black hole. A few potential intermediate black holes have been spotted, but this is the first direct evidence of their existence.

This strange signal was produced by the merger of two equally weird black holes: The heavier of the two merging black holes, at 85 solar masses, is the first black hole so far detected smack-dab in what is known as the “pair-instability mass gap.” A star that collapses shouldn’t be able to produce a black hole between the range of 65 to 120 solar masses because the most massive stars are obliterated by the supernova that comes hand in hand with their collapse. According to Weinstein, a possible explanation might be what astronomers call hierarchical mergers—when lighter stellar-mass black holes merge into heavier ones, which then merge into heavier ones still,” consolidating until they become gargantuan black holes.

Astrophysicist K.E. Saavik Ford of the Graduate Center at City University New York who was not involved in the study says this finding is particularly exciting: “It’s a bridge between the black holes that are formed directly when stars collapse and supermassive black holes that we find in the centers of galaxies.” As Saavik Ford points out, it’s actually very hard to make hierarchical mergers since black hole remnants have to find each other, and then merge together. “That takes many, many, many lifetimes of the universe under anything like normal circumstances,” Saavik Ford says, “so it had to have happened in a very dense stellar environment” like an active galactic nucleus or AGN.

Earlier this summer, Saavik Ford and her team published a paper about a black hole merger exploding with light coming from the same general part of the sky as the one detailed this week. Though there could be a connection between the flare and the merging black holes outlined in the recent papers, Ford is waiting for the full dataset of the new findings to be shared to tease out some answers.

Right now, LIGO and Virgo are not making observations, but the two facilities will be back online by the end of next year with some upgrades. Gravitational-wave astronomers like Weinstein hope these Earth-bound gravitational wave detectors become all the more sensitive in order to probe more distant sources and look farther back in time in the evolution of the universe. “We need to look for more exotic events like this one—and for more exotic events like nothing we have ever seen before,” Weinstein says. “Wouldn’t that be great?”