And will probably follow us for several more centuries 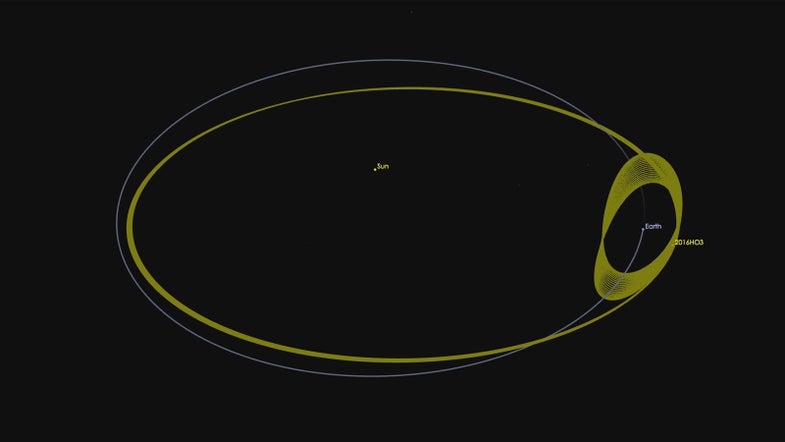 NASA announced yesterday that it has noticed an asteroid shadowing Earth, circling around us as we both orbit the Sun, and its been doing this for over one hundred years now.

The unimaginatively named 2016 HO3 (I vote we call him ‘Buddy’) has been dancing around us, sometimes jumping ahead of us on our orbit around the sun, and occasionally falling behind. As NASA notes in a release it’s like we’ve been playing a game of leapfrog with the small asteroid for years.

“The asteroid’s loops around Earth drift a little ahead or behind from year to year, but when they drift too far forward or backward, Earth’s gravity is just strong enough to reverse the drift and hold onto the asteroid so that it never wanders farther away than about 100 times the distance of the moon,” Paul Chodas, manager of NASA’s Center for Near-Earth Object (NEO) Studies, said. “The same effect also prevents the asteroid from approaching much closer than about 38 times the distance of the moon. In effect, this small asteroid is caught in a little dance with Earth.”

And we’ll keep dancing for many more years. Researchers estimate that it will stay in its strange orbit for another few centuries at least, but don’t think you’ll be able to spot it. The asteroid is only between 120 and 300 feet across, and much further away than the moon. It poses no threat to Earth.