The Office of Science and Technology Policy exists to provide the President with objective scientific advisement. 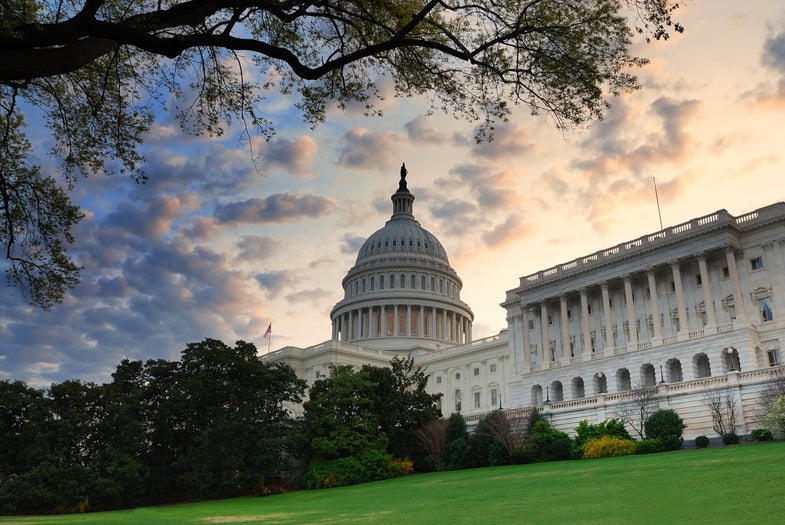 The White House’s Office of Science and Technology Policy doesn’t have a director nor an official mandate, and it hasn’t had one since President Donald Trump took office. The President has yet to nominate anyone for the position, though he is required by law to do so, and has left the directorship open for the longest stretch in its history.

Now, members of the House Science Committee are speaking out—again. The Democratic representatives previously published an open letter to the President in May of 2017, taking him to task for relying on—and spreading—”fake news” from outlets known to misconstrue the scientific evidence on things like climate change. This could be avoided, or at least mitigated, they argued, if the administration would only appoint a Director to the OSTP. Eight months later, they’re calling out the President for continuing to neglect the decision.

“I guess I’m not optimistic, because we have seen this progressive destruction of our environmental agenda … and certainly the President’s tweets reflect absolutely no understanding of how science works,” Rep. Don Beyer (VA) told Popular Science. “But we have a responsibility to keep trying.”

“There’s no reason to think the President has any scientific background whatsoever,” Beyer added. “So for goodness sake, let’s get some people around him who do.”

Created by Congress in 1976, the OSTP exists to provide the President with objective scientific advisement, separate from partisan arguments on policy. The office works from the White House itself, and its director must have the scientific literacy to speak authoritatively on everything from potential epidemics to nuclear disasters. It’s a job for someone who can digest and weigh the best available scientific evidence, and who (along with their chosen staff) can help guide the country through crises where health, science, or technological prowess come into play.

And not only is that role still vacant, but the office itself was recently described as a ghost town. The OSTP staff has dropped to 45 members, most of whom do not have a background in science, compared to the 135 who worked there under the Obama administration. The de-facto leader of the office is deputy chief technology officer Michael Kratsios, a former Silicon Valley financier with a bachelor’s degree in politics. While the social science vs. science debate is often tiresome, it should be noted that political science undergrads are generally not expected to study either epidemiology or nuclear physics.

In short, the OSTP is not simply a ship without a captain. It’s a rowboat in the middle of the ocean.

“Recent actions and statements by you and your Administration have demonstrated the dire need for scientific expertise in the Trump White House,” the new letter states, citing a recent tweet from our Commander in Chief:

In the East, it could be the COLDEST New Year’s Eve on record. Perhaps we could use a little bit of that good old Global Warming that our Country, but not other countries, was going to pay TRILLIONS OF DOLLARS to protect against. Bundle up!

“This tweet betrayed a total ignorance of the difference between climate and weather, and also of the principles of the Paris Climate Agreement, from which you decided to withdraw the United States last year,” the representatives write.

Indeed, while parts of the United States experienced an unusual cold snap, average global temperatures on the whole have been high. Climate patterns—like the La Niña that chilled 2017, making it only the second-hottest year on record—combined with short-term weather systems (bomb cyclone anyone?) can keep parts of the world cold temporarily, but the science is clear on climate change. It’s getting hotter.

Given that the appointed Administrator of the Environmental Protection Agency has expressed doubts on the science of global warming, it is perhaps doubtful that any director nominated to the OSTP would actually provide the President with accurate scientific input. But the representatives behind the letters note that any expertise would be better than none, and worry what the country will do without the OSTP in the face of “an unforeseen catastrophe.”

“The science adviser is the one individual who can quickly pull all the relevant information together for the President, cut through conflicting advice coming from other senior advisers and Cabinet secretaries, and get evidence-based options in front of him,” former OSTP Director Neal F. Lane and researcher Michael Riordan wrote in a New York Times op-ed earlier this month. “Especially important has been the adviser’s role in helping the President deal with crises—Sept. 11, the subsequent anthrax attacks, the Fukushima nuclear nightmare in 2011, the Ebola and Zika outbreaks, hurricane devastation, and cyberattacks.”

“No president in recent history has needed a capable science adviser more,” the op-ed concludes, “while apparently wanting one less.”

Congressman Bill Foster (IL), another co-signer on the letter (and, as it so happens, a physicist), told PopSci that the OSTP Director is a crucial point of connection between the President and the field of science.

“They’re not just there as a source of direct scientific advice,” he said, “But because that person should have contacts throughout the scientific community, and know who to ask for expertise.” The lack of appointment, he said, is in line with a general pattern of disrespect and disregard for experts. “Frankly, this is very dangerous for our country. There’s a real danger of an emergency coming up where the President does not have an adviser on hand who understands the scientific implications. I hope we don’t face that, but I worry what will happen if we do.”

Ideally, Beyer told PopSci, Trump will appoint an OSTP Director and Chief Scientists for NASA and the National Oceanic and Atmospheric Administration (NOAA). If he could increase the expertise in his administration, Beyer believes the President could make more informed decisions on everything from carbon emissions to spaceflight. “My expectations are that he will slow walk this, not so much out of obstructionism but rather out of a lack of interest,” Beyer said. “He doesn’t have a lot of interest in these kinds of things. But I would love for him to be [interested], and it would be very good for the American people.”

The President no longer responds to Congressional letters unless they come from committee chairmen—a new and unprecedented policy, Beyer noted. The House Science Committee is currently chaired by Rep. Lamar Smith (TX), who disagrees with the scientific consensus on climate change.

“At least in the short run, while my friend Lamar Smith runs the committee, we’re not going to win any battles on climate,” Beyer said, though he added that certain aspects of science—spaceflight and medical research, in particular—are far less partisan, and have seen Congressional support across the political spectrum. Smith’s upcoming retirement, combined with the upcoming midterm elections “may offer new opportunities for bipartisanship,” Beyer said.

“For now, I think it’s really important to keep positive pressure on the members of the House and the Senate, especially Republicans, but Democrats too,” Beyer said. “Members of the scientific community have to continue to stress that science is fundamentally important. We want people on both sides of the aisle to wake up and embrace that, to make decisions based on sound science.”

Foster urges concerned constituents to call their representatives. “They should express their disappointment over the drift in science policy,” he said. “That actually has an effect, at least for most members of Congress.”

“And we should stay optimistic,” Beyer said. “We have to keep moving forward despite the obstacles. This current administration is turning away from scientific legitimacy, but that won’t last forever.”

We wrote you in May urging you to appoint a Director for the Office of Science and Technology Policy (OSTP). Specifically, we wrote to you to say,

“We are concerned about the process by which you receive information … Until the OSTP is adequately staffed and the director position filled by a qualified, objective scientist who understands the difference between alternative news peddled on alt-right websites and legitimate well-vetted scientific facts, we fear that you will continue to be vulnerable to misinformation and fake news.”

Since that time, you have continued to operate without the crucial scientific and technological expertise which OSTP has provided to previous presidents. A recent report described the office as being a “ghost town,” and our concerns that you would fall prey to misinformation have continued to be born out. Recent actions and statements by you and your Administration have demonstrated the dire need for scientific expertise in the Trump White House. On December 28, you tweeted:

“In the East, it could be the COLDEST New Year’s Eve on record. Perhaps we could use a little bit of that good old Global Warming that our Country, but not other countries, was going to pay TRILLIONS OF DOLLARS to protect against. Bundle up!”

This tweet betrayed a total ignorance of the difference between climate and weather, and also of the principles of the Paris Climate Agreement, from which you decided to withdraw the United States last year. Scientific experts believe that climate change significantly worsened the numerous natural disasters that afflicted Americans across the country in 2017, claiming thousands of lives and costing hundreds of billions of dollars. Complying with the terms of the Paris Agreement would have required federal outlays estimated at a small fraction of that amount, and would help to mitigate future climate-related disasters.

More broadly, your Administration has repeatedly downplayed or ignored the importance of scientific fact and scientific research. In November, Environmental Protection Agency (EPA) Director Scott Pruitt insisted that he would go forward with its decision to repeal the Clean Power Plan, the centerpiece to our national strategy to confront climate change, despite his own agency’s report that climate change represents a major threat to the United States. You removed climate change from your national security strategy, even though military leaders say that climate change and its geopolitical fallout represent a clear and present danger to this country. And you proposed a budget which would gut funding for scientific and medical research.

We believe that these mistakes might have been avoided if you had availed yourself of the kind of expert advice which previous presidents relied on when making such decisions. We are even more concerned, however, about what might occur if the country faces an unforeseen catastrophe.

We are therefore writing to again urge you to staff your team with qualified scientific advisors. As former OSTP Director Neal F. Lane noted recently, this office provided crucial information which helped past presidents handle national security crises including 9/11, the anthrax attacks which came after it, the Fukushima Daiichi nuclear disaster, outbreaks of Zika and Ebola, as well as natural disasters and cyberattacks.

Sound scientific and technology advice is indispensable to US national security and economic growth, and to forming federal policies that help drive the kind of research and technological advances that made this country great. Despite its importance to the safety and prosperity of the country, however, a year into your term, OSTP remains without a Director and has one third as many staff as it had under President Obama.

It is deeply important that you fill the vacant office of OSTP Director as required by law, and fully staff this institution with qualified and knowledgeable officials, as soon as possible.

We thank you for your attention in this matter.