The rambunctious game brings science into the mix for a little player-by-player analysis. 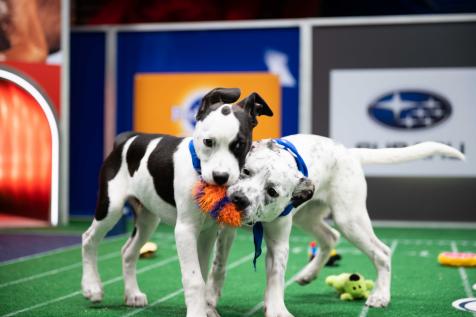 The rescue pups that star in the Puppy Bowl come with all sorts of behaviors and quirks. Can DNA test help shed light?. discovery+
SHARE

The clock is winding down in the fourth quarter of the 17th annual Puppy Bowl. Team Fluff’s Beliveau pounces on the ball and races into the end zone as time expires: touchdownnnn. While it could be simple luck, this puppy’s well-timed flash of football genius may have something to do with the golden retriever ancestry revealed in its DNA.

Every year since 2005, Animal Planet has hosted young rescue dogs from across the country in the Puppy Bowl, a canine “football” game inside a model stadium, which airs on Super Bowl Sunday. This year, there are 70 puppies divided into two teams: Team Fluff and Team Ruff.

Dog DNA tests are nothing new—there are several companies selling them online for as little as $60 a pop. But for the purposes of the Puppy Bowl, the breed composition of each “player” is most important for in-game commentary, as it often plays a dominant role in personality and enthusiasm. To bring viewers a little analysis through genetic evidence, the Puppy Bowl has partnered with dog-specific testing service Wisdom Panel since 2018.

Annette Louviere, the manager of veterinary technical support at Wisdom Panel, says her team makes use of distinct single-nucleotide polymorphisms (or SNPs, pronounced “snips’’) associated with specific dog breeds to bring together the puzzle pieces of each puppy’s genetic identity.

An SNP is an isolated change to DNA building blocks called nucleotides, which link together to form an individual’s unique genetic sequence. It can come in the form of a deletion, addition, or change in the type of a single nucleotide. Typically, the DNA of members of the same species, like dogs, contain a particular SNP or group of SNPs that help break it up into smaller subgroups, like breeds. “SNPs have such a low frequency of mutation that they’re very dependable,” Louviere says.

Once a picture of a puppy’s unique genetic signature comes into focus, Wisdom Panel uses a computer algorithm that runs about 7 million comparisons between the subject’s DNA and the unique genetic “barcode” for 353 varieties of dog breed. The algorithm then evaluates which breeds are a statistically significant match for the puppy being tested. Louviere says Wisdom Panel’s tests can detect up to five to six breeds with as little as a 1 percent ancestry match.

But as some experts put it, defining doggie ancestry can be tricky. “To a large degree, the accuracy of breed composition tests very likely depends on the degree to which a dog is ‘mixed,’” Lauren Baker and Susannah Sample, both of the School of Veterinary Medicine at the University of Wisconsin-Madison, wrote in an email to PopSci. “From a veterinarian’s standpoint, we find these ‘breed identification’ tests are fun for many owners. But having not been evaluated by the scientific community, they shouldn’t be used to alter medical decisions.”

During the Puppy Bowl itself, the commentators will use the breed information unearthed by the DNA tests to add context to the puppies’ actions and reactions on the playing field. For example, a player with border collie ancestry will probably bound and leap in pursuit of the ball, while a player with basset hound ancestry might choose to curl up for a power nap mid-game.

[Related: How much sweat gets left on the field during the Super Bowl?]

Erin Wanner, who oversees production for the Puppy Bowl, says casting of the rescues happens before the DNA tests are done and requires a bit of guesswork. Her team aims to sample a variety of puppy personalities for the big game, from the mellow to the natural athletes and everything in between.

“We’re always looking for a mix of different types of dogs in terms of how they look and their energy levels,” she says. “And at that point we actually don’t have the DNA results, so we’re going off whatever the shelters are guessing the puppies might be, which is often hilariously way off the mark.”

The puppies’ DNA tests will be useful once their football careers are over, too, Wanner says. After the event, their breeds can be helpful in matching them up with adopters. Knowing a dog’s ancestry allows owners to expect certain behaviors and quirks in their new friend, Louviere says. “When you better understand their DNA,” she adds, “you can work a little better on that human-animal bond, too.”

Puppy Bowl XVII will air on the streaming service discovery+ at 2 pm ET this Sunday, February 7.