Enough for a good Gatorade-style dunking, at least. 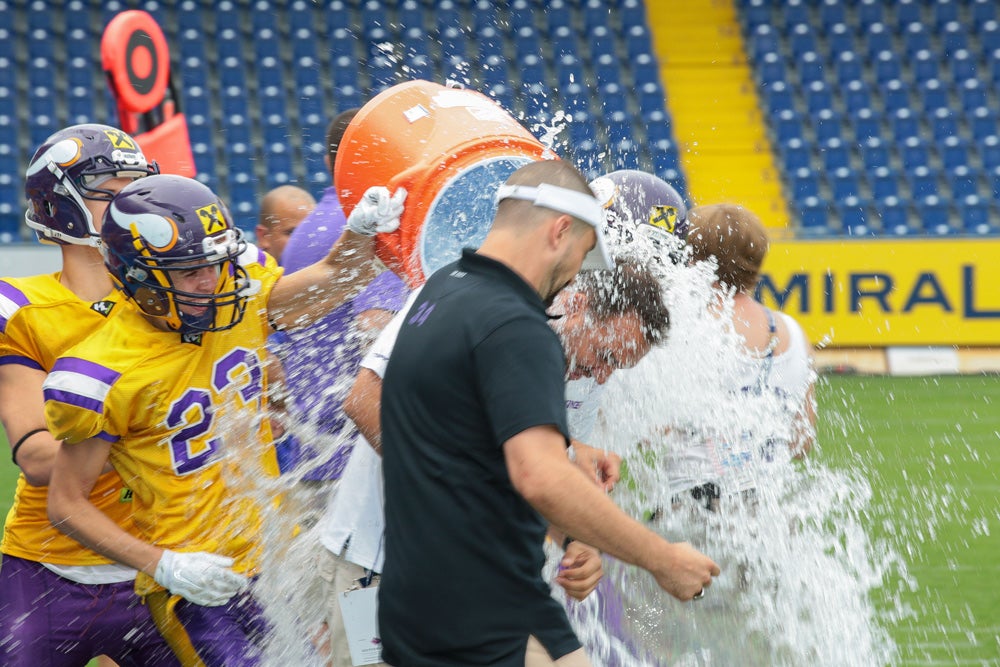 There’s a high chance the Super Bowl will end in a Gatorade shower—a tradition so hallowed, people even bet on what color the hydrating beverage will be when it soaks the head coach of the winning team. But what if that shower were made of sweat instead of a sports drink? If both of the competing teams combined their Super Bowl sweat, could they fill a whole cooler?A bit of science while you hold back your vomit: Scientists have actually figured out how much the average National Football League player sweats. In 2007, researchers from West Chester University’s HEAT Institute, Pennsylvania Hospital worked with the Eagles and the Minnesota Vikings on a pre-season study to quantify the sweat rate of these hard-working athletes. The results were published in the Journal of Athletic Training, and they provide some surprisingly specific data to back up our thought experiment.It’s relatively simple to calculate someone’s sweat rate. Here’s a handy formula:

The final number represents how much sweat the body actually secretes during exercise. That helps athletes figure out how much they need to drink to maintain optimal hydration and avoid heat stroke.

The average athlete loses about a liter of sweat an hour; Alberto Salazar, a beleaguered American marathoner, lost 3.7 liters per hour and 12 pounds of his total body weight during the 1984 Olympic marathon in Los Angeles.

For NFL players, the number is lower than sweat champion Salazar, but much higher than their colleagues in sports like soccer or running. That has to do with their large body surface area and the protective equipment they use to prevent injury. Not surprisingly, the study found that linemen, who are the largest on the field, sweat more than backs or receivers.

Larger bodies aren’t the only explanation for the higher amount of sweat—linemen weigh more and likely have bigger sweat glands, and more of them. Researchers also believe they experience less airflow during game play, which means they get warmer than backs or receivers. And even though the NFL players only practiced for three hours a day during the study, some lost over 8.2 liters of sweat daily.

A football game technically only lasts for 60 minutes, so it makes sense to use the per-practice number for our repulsive thought experiment. A few caveats, of course, apply: The data in question were gathered during the August preseason, so they’d likely vary in an indoor facility like Minneapolis’s U.S. Bank Stadium. Since Super Bowl play is so high-stakes, it makes sense that teams might take advantage of the NFL’s unlimited substitution rules. Still, let’s assume that the Super Bowl is the most grueling game of the year, and that the men on the field play the entire game. Most importantly of all, there’s no way to tell how many backs, receivers, and linemen will end up playing in any particular game—so let’s take an average of the two numbers and multiply that by the 11 players allowed on the field at any given time.

So combined, a troop of sweaty football players might produce a grand total of 41745 mL of sweat per Super Bowl, or 11 gallons. That means one single, precious 10-gallon cooler of salty secretion—with a bonus gallon to make the dunking all the sweeter.