What to do if you get caught in an avalanche

We asked the experts 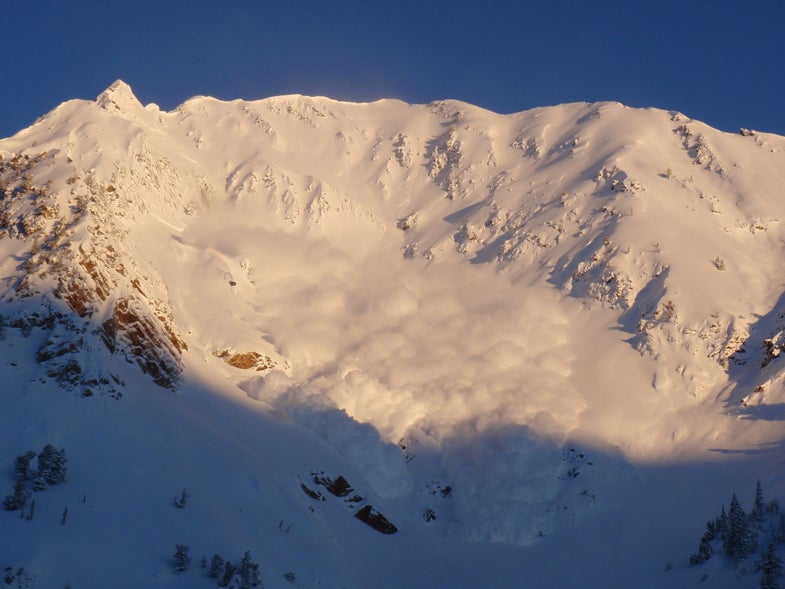 Earlier this month, a controlled avalanche in Canada’s Banff National Park had some unintended consequences. The avalanche was supposed to take unstable snow off the slopes to prevent a bigger disaster, but it wound up burying a stretch of highway under 50 feet of powder.

This snowfall didn’t go according to plan, but at least nobody was hurt. However, plenty of avalanches are set in motion by accident. They are most likely to happen during or right after a winter storm, when the fresh influx of snow hasn’t had time to bond to the underlying layers. But accidents also happen when the snow starts to warm up and melt in spring.

Avalanches are common in mountainous states like Colorado, Utah, Idaho, Montana, Alaska, and those along Pacific coastline. But they can happen with a steep enough slope coated with snow. Avalanches kill an average of 39 people in North America every year, including avalanche experts. If you happen to find yourself in the path of an avalanche—planned or unplanned—how can you protect yourself?

There is no surefire way to survive an avalanche. “There’s sort of an unsettling element of randomness about who lives and who dies in an avalanche,” says Karl Birkeland, director of the United States Forest Service’s National Avalanche Center. “We see cases where people are caught in really small avalanches that die, people with really good training that die, people that are caught in really big avalanches that just somehow live through it.”

But if you do get caught in an avalanche, there are a few things you can do to improve your odds.

First, try to escape. If you’re lucky, you may have a second or two to act, especially if you’re on skis or a snowmobile. “You want to try and get off that moving snow,” Birkeland says. Chances are, though, that you won’t be able to get out of the way. “When the slab breaks free, it tends to break out all around you.”

If you get knocked off your feet, your next goal is to slow yourself down. Try to grab a tree or some other anchor. You might even be able to dig into the underlying ground or snow, if you have an ice axe and the avalanche is shallow enough.

It’s very likely, however, that you’ll get swept up in the deluge. “Most people are caught and start tumbling,” says Christopher Van Tilburg, a wilderness physician and chair of the medical committee for the Mountain Rescue Association in San Diego. “You just have to kind of fight to stay at the surface.”

Your best bet is to make swimming motions or thrash to keep yourself afloat. Some survivors also say that rolling like a log helped them move toward the edge of the avalanche, Birkeland says.

Meanwhile, jettison any equipment you can. Snowboards and snowmobiles can hit or roll on top of you. If you have skis on, they can drag you down deeper in the debris—hopefully, they will come off, Birkeland says. “When you’re skiing in avalanche terrain you never want to put on your ski straps on your ski poles,” he adds. You want to be able to let go of your ski poles instead of having them yanking on your arms in the maelstrom.

Eventually, the snow around you will begin to slow down. Now you have two jobs: The first is to punch your hand up towards the surface (wherever you think that is). That will make it easier for rescuers to find you. The second is to clear the space around your mouth to make an air pocket. You can push the snow away with your other hand, or use the crook of your elbow. If you reach over and grab the backpack strap on the opposite side of your body, your elbow may protect your mouth from being jammed with snow and give you a space to breathe.

You must do both of these things quickly, because the avalanche may end before you expect. “A lot of people say that it catches them almost by surprise—they think they’re coming to a stop and then, boom! They stop,” Birkeland says.

If you are very fortunate, you will wind up only partially buried, or with your arm sticking up out of the snow. If your elbow is free, you might be able to push a little bit of snow out of the way so you can clear a path down to your mouth and nose.

But you probably won’t be able to move at all. “You can’t even really struggle, you’re locked in and encased in snow,” Van Tilburg says. “It is so tightly packed it’s like cement.” There have been cases, he says, where people brought their skis and snowboards to dig through avalanche debris, only to have them break upon the unforgiving snow.

You must now hope that your buddies have practiced with their avalanche rescue gear and can find you quickly. “If you end up completely buried, really—and this is going to be next to impossible—the best thing you can do is just relax,” Birkeland says. “At that point, your fate lies almost entirely in the hands of your partners.”

So, what if you are the one who has just watched your friend get carried off in an avalanche? First, keep your eyes on them. Watch your friend carefully from the time they are caught until they sink beneath the snow. Then keep watching that piece of snow where they disappeared until the avalanche comes to a stop. This will give you an idea of where they might have end up in the debris. Next you must go and find them. That involves using an avalanche beacon and metal probe to hone in on where they are buried. Then you can start digging.

Once the avalanche grinds to a halt, it will probably be safe to pick your way down the slope to search for your friend. It can depend on things like the kind of terrain and weather, though. “In general, after an avalanche releases it’s going to take most of the unstable snow from that particular slope,” Birkeland says. “But you also don’t want to make things worse by going down and triggering another avalanche and getting yourself caught.” That’s why it’s important to get avalanche safety training before you strike out into the backcountry.

Most avalanche deaths happen because people suffocate; if you’re uninjured but completely buried under the snow, you have about a 50 percent shot at surviving. But the longer you wait for rescue and the deeper you are buried, the poorer your chances are. A few feet down, all the snow on top of you can be packed so tightly that you can’t even expand your chest to breathe.

There is some gear that can improve your odds. An avalanche airbag—which puffs up like a big balloon on your back when deployed—will make you more likely to stay near the surface of the avalanche until it finally peters out. “You can think of it like when you open up a bag of potato chips,” Birkeland says. “The big potato chips are on top and the small little broken ones are all sifted down towards the bottom, and avalanches work somewhat the same way.”

Another tool that can help is the snorkel-like AvaLung, a device that helps you breathe under the snow. It draws in oxygen from one area, and dispels the carbon dioxide you breathe back out into a different one.

This equipment can’t guarantee your survival, though, especially if you are alone. You might still be smacked into a tree or boulder and die before the avalanche even ends. Or you might escape with a minor injury, only to realize you aren’t fit to trek out.

“If you get in even a minor avalanche and have a minor injury like a sprained ankle or a twisted knee, that can have really big consequences,” Van Tilburg says. “All of a sudden you’re spending the night in the backcountry until someone comes to rescue you.” That ups your risk for hypothermia, dehydration, and starvation.

Unlike most natural hazards, avalanches can be triggered by our own actions. “We want to do all we can to lower our odds of dying in an avalanche,” Birkeland says. “But…ultimately the way to survive avalanches is to avoid being caught in them.” That means getting educated about what to do in an avalanche, what kind of terrain and conditions spawn avalanches, and how to use your gear well before you hit the slopes, as well as checking an avalanche forecast.

There’s a lot that researchers still don’t know about what happens to people in avalanches. “A lot of these guidelines were based on sort of what we think works,” Van Tilburg says. You can’t toss people into an avalanche to see what happens, so it’s difficult for researchers to study these natural disasters.

We do know that avalanches can be incredibly powerful, thundering along at 200 miles per hour and snapping “300-year-old trees like little old matchstick twigs,” Birkeland says. But rescuers have also seen that even small avalanches can be deadly.

“People get kind of lured. Every once in a while we have an early season accident where people think, ‘oh that’s never going to avalanche, there’s only a foot of snow on the ground,’” Van Tilburg says. But if that snow peels away underfoot, it can it can still slam you into a rock or tree.

There is some good news, though. Even though more and more people are flocking into the backcountry, the rate at which people die from avalanches in the United States has gone down over the last few decades. That’s a sign that more people are taking advantage of avalanche courses and equipment, and exploring the snowy wilderness more safely.

We can’t stop an avalanche once it’s in motion, but that doesn’t mean we are powerless. Ultimately, “Most avalanche accidents are preventable,” Van Tilburg says.