Feral Cats Are A Huge Threat To The Global Ecosystem 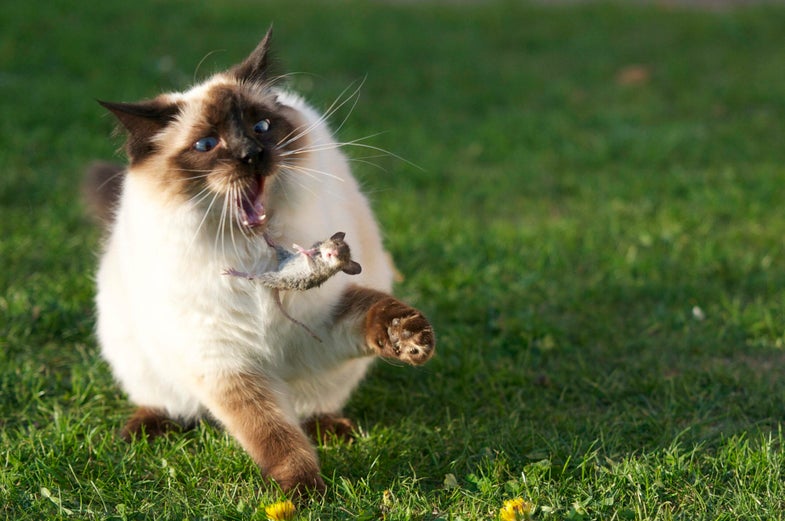 This siamese cat may or may not eat this mouse. Cats are hunters, but domestic cats often hunt just for sport, meaning that even well-fed house cats are to blame for these extinction events. flickr user Niels Hartvig
SHARE 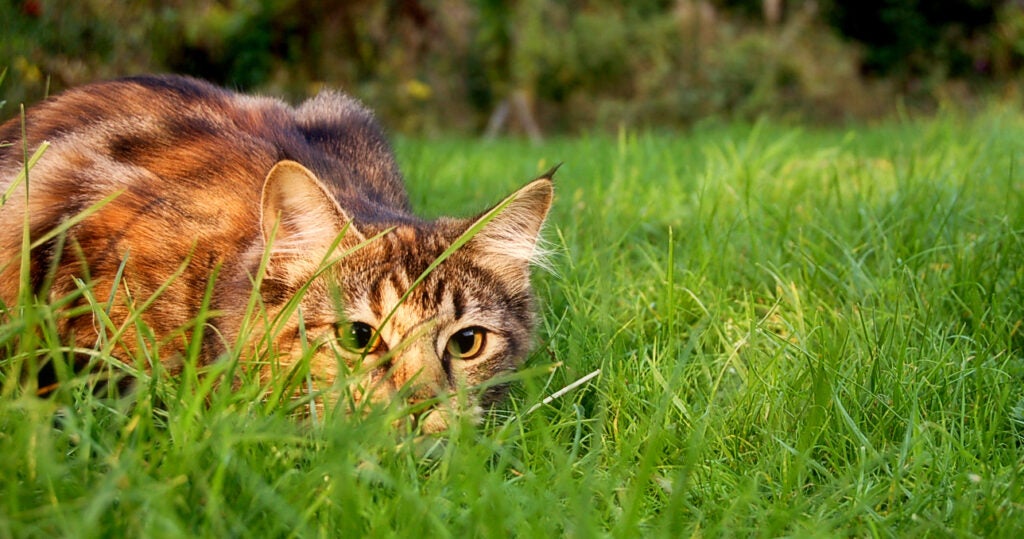 Cats are one of the world’s most devastating predators

The domestic cat (Felis catus) accompanies humans all over the world, finding prey wherever it goes. As a result, researchers say it is linked to 26 percent of all animal extinctions.

Ever wondered why some cat owners put bells on their pets’ collars? No, it’s not so they can find Oreo at night or Snow Queen in a blizzard. The reason is that cats are predators, and a tinkling little bell is meant to scare away potential prey animals before our domesticated predators can turn them into meals, toys or gifts. Their predatory instincts can make for cute or disturbing playtime, but a new meta-analysis published in Proceedings of the National Academies of Sciences suggests that cats and other invasive mammals have profoundly impacted affected global biodiversity.

Australian conservation ecologist Tim Doherty and his colleagues combed through the International Union for Conservation of Nature and Natural Resources’ (IUCN) Red List of threatened species, and they analyzed the data to determine which non-native predators were wreaking the most havoc on native animals. Among these non-native predators were cats and dogs. When analyzing data, the researchers, “took any reference to ‘domestic predators/carnivores/pets’ to mean cats (F. catus) and dogs (C. familiaris).” And while these are mostly feral individuals, house-kept members of F. catus and C. familiaris are not blameless. 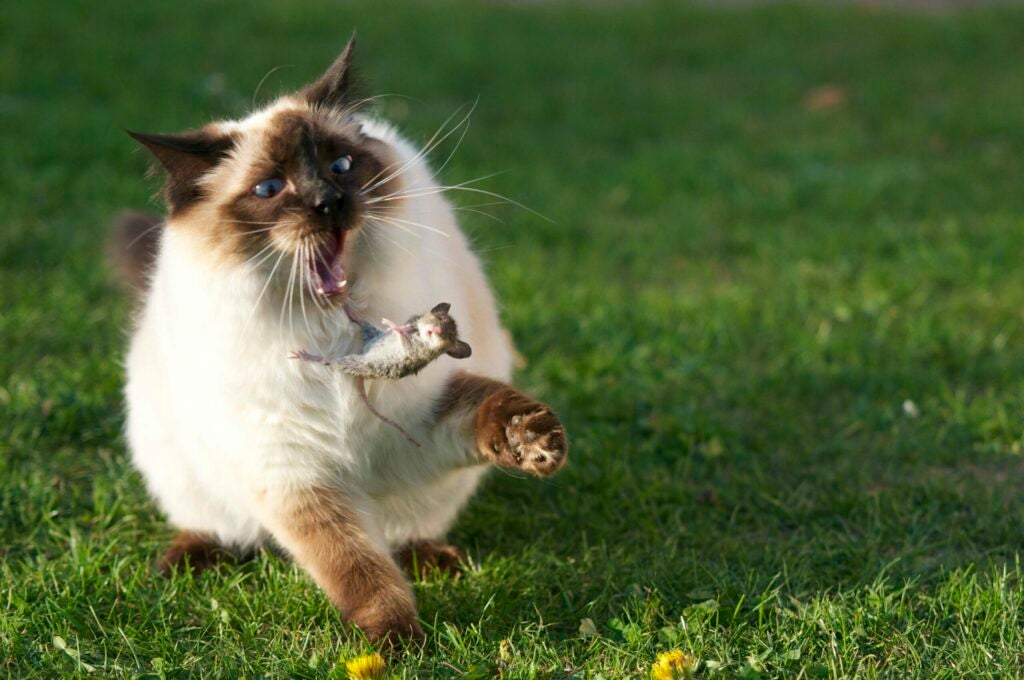 Playing with your food

This siamese cat may or may not eat this mouse. Cats are hunters, but domestic cats often hunt just for sport, meaning that even well-fed house cats are to blame for these extinction events.

They found that, “596 threatened and 142 extinct species (total 738) have suffered negative impacts from 30 species of invasive mammalian predators.” In addition to cats, the predators topping this list include rodents, dogs and pigs. And while we may think of cats as the predator most deadly to birds, the researchers say that rodents are responsible for 52 bird species’ extinctions, compared to cats’ lower but still shocking score of 40.

The researchers argue that invasive predatory mammals are the worst driver of species extinction, “collectively contributing to 58 percent of all bird, mammal, and reptile extinctions.” The number could be even higher, though, “because 23 critically endangered species negatively affected by invasive predators are currently classed as possibly extinct.” 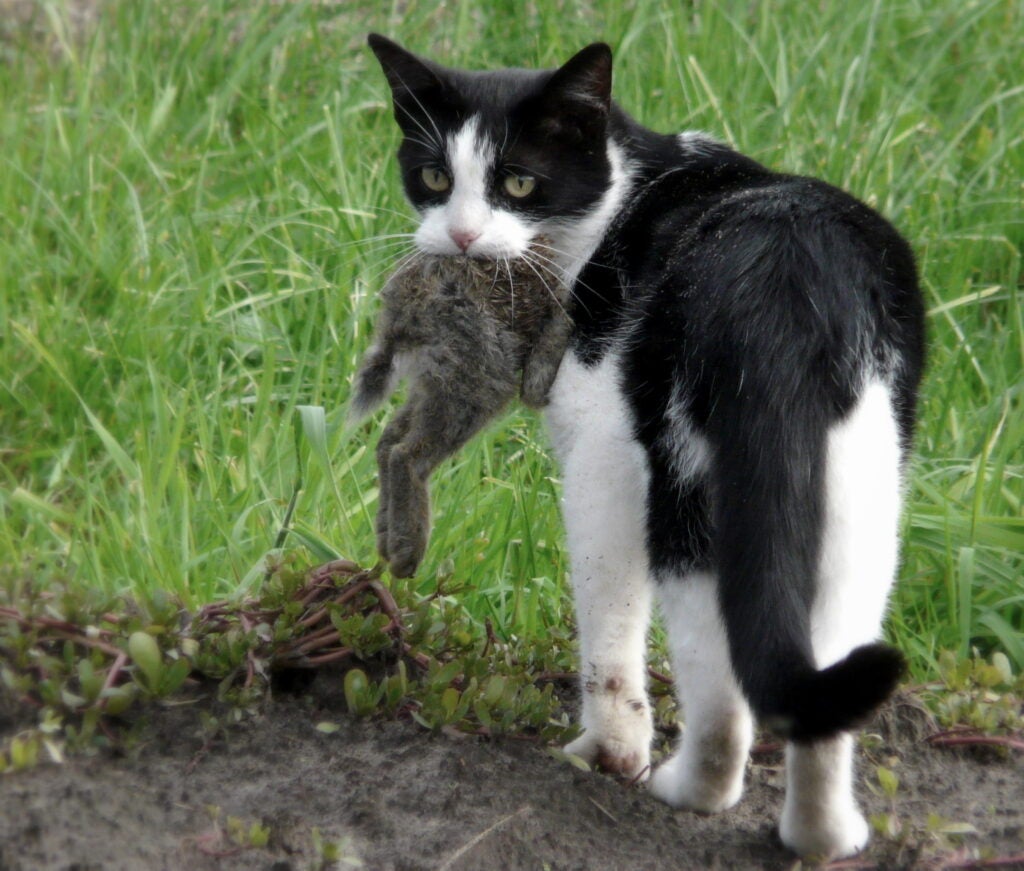 Quicker than a rabbit

Cats are superb hunters, allowing them to nab all sorts of prey. This cat appears to need a doggy bag.

The researchers identify the populations most at risk: animals that occupy isolated or small ecological niches. A species that lives on an island, for instance, is more likely to be affected by invasive predators than a species that inhabits a variety of environments.

So, should you put a bell on your cat? It probably won’t hurt (though some might argue otherwise), but it also might not help. Some cats can move stealthily enough that their bells don’t make sound, so some owners have resorted to brightly colored collars to scare birds away. Stray cats that people make their pets are the ones to look out for, since their hunting skills are the most honed. The most surefire solution, though, is probably to keep your cat indoors, where the only thing it can kill is your loneliness.