A lizard’s health is in its gut 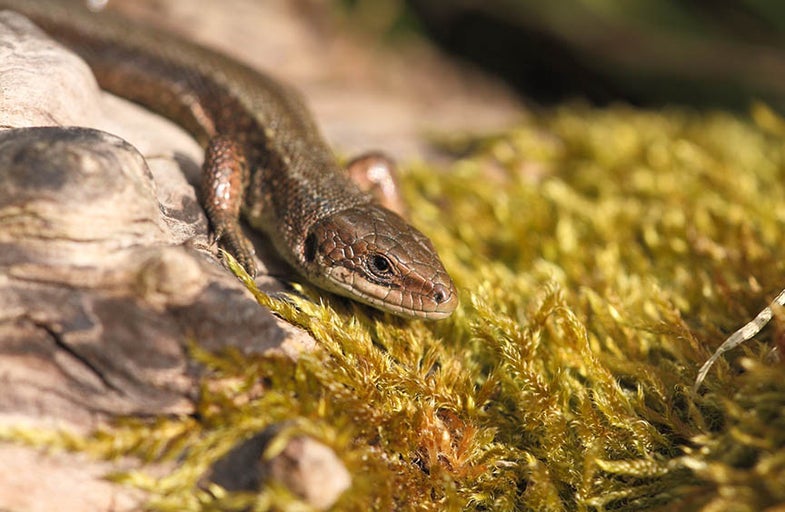 Zootoca vivipara, better known as the common lizard, is the sort of reptile that a budding ecologist might bring home to parental horror. At around two and a half inches long, and weighing less than a pencil, the lizard is perfectly sized for hand concealment. The lizard, as its name suggests, is common. Its range begins to the west in Ireland and stretches as far east as Japan, with an expanse that reaches as far north as the Arctic Circle and as far South as northern Italy. With so much of its range unoccupied by humans—and the eco-systems therein intact as a result—it’s no surprise that the IUCN Red List of Threatened species lists Zootoca vivipara as a species of least concern. And yet, a new study in the journal Nature Ecology and Evolution suggests that humans don’t actually have to encroach upon the common lizard’s habitat to cause the critter harm. We just have to turn up the heat. Researchers found that a warming climate, which the lizards will likely encounter under climate change, causes a 34 percent loss of the lizard’s microbiome diversity, or gut bacteria.

Researchers are increasingly aware that the bacteria in an animal’s gut—yes, even a lizard’s—play a huge role in everything from digestion to immunity. Wellbeing, at least in part, resides in the gut. While we’re still learning what makes up a healthy microbiome, a diverse microbiome—that is one that has lots of different types of bacteria—is generally considered favorable.

At the same time, researchers know that the profile of a gut’s bacteria is impacted by environment. Population density and diet, for example, affect the health of a lizard’s gut, and in turn potentially affect the health of the lizard. Because lizards are cold blooded and depend heavily on their environment to maintain bodily temperatures, it made sense to wonder what impact, if any, warming temperatures like those predicted to occur under climate change would have. The results aren’t great: lizards exposed to warming temperatures not only had less bacterial diversity, but they also tended to die sooner.

The researchers came to this conclusion through a series of experiments. In the first, they allocated nine lizards to three summer climate conditions—present climate, intermediate climate warming (+2 degrees Celsius) and warm climate (+3)—that are consistent with the Intergovernmental Panel on Climate Change (IPCC) projections. After exposing the lizards to summer climatic conditions from mid-June to mid-September, the researchers brought them back to the thermal present and sampled the bacterial in their cloacal (a cavity that serves as the opening for the intestinal, genital, and urinary tracts in many vertebrae including lizards). They also did a similar study involving a two-month long summer climatic treatment, instead of the four months in the original run. In both, they found that the lizards exposed to warmer climates had less diverse colonies of bacteria in their guts.

Of course, the loss of gut bacteria diversity doesn’t necessarily mean that the lizards were less healthy. Couldn’t it be that the warm climates actually killed off harmful bacteria, leaving the lizards with a less-diverse but ultimately better collection of microbes?

To find out, the researchers kept an eye on their study subjects for a year after the temperature tweaking occurred. The lizards with the greatest gut bacteria diversity (the ones spared the warmest climates) were most likely to survive, suggesting that the loss of diversity really did harm their fellow reptiles.

The authors aren’t saying that this is definitive. It could be that the rapid warming conditions of the experiment put stress on the lizards, and that a slowly warming climate might not have the same result. At the same time, however, climate change is not marked by a steady warming of temperatures—we are not the proverbial frog being slowly boiled to death in a pot. Rather, climate change is marked by relatively quick temperature changes, including things phenomena like the heat waves that rocked Russia in 2010. The experiment didn’t do a bad job of mirroring those conditions.

If the study’s results hold, it could be that this is one more unforeseen way in which climate change is harming the environment. The impacts of these and other indirect effects of climate change—lizards, mind you, play a big role in insect control—might go unnoticed until humans start feeling the heat.