Snakes can actually hunt in packs

But you should only be scared if you live in a cave in Cuba. 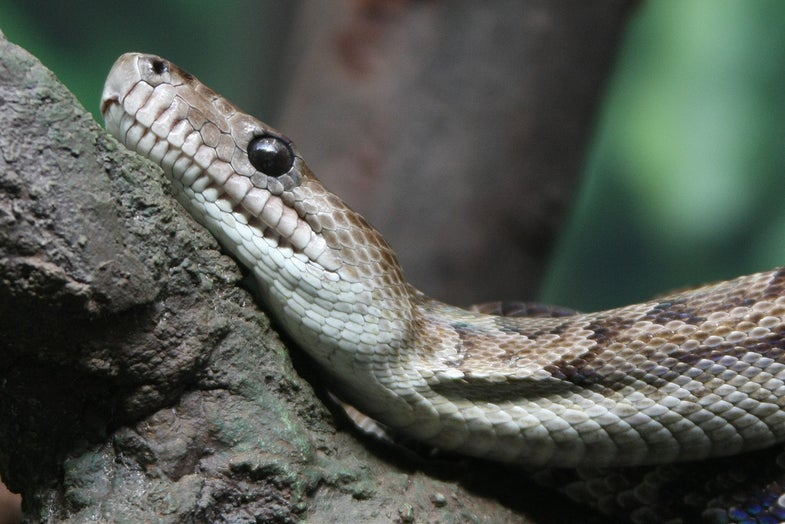 The world is a scary place without knowing that snakes hunt in packs. But one biologist in Cuba just couldn’t leave well enough alone, so he proved for the first time ever that reptiles don’t just hunt near each other, they hunt with each other.

Snakes are not social creatures. They don’t live in packs like wolves or chatter to each other like prairie dogs. They join forces for just one thing: to kill. Snakes have long been known to hunt in groupings, it just wasn’t clear how coordinated these efforts were. It makes sense that they would all have a similar sense of where the best spot to hunt is, so many snakes gathering in one area doesn’t necessarily mean they’re coordinating. To prove that, you’d have to prove that the snakes were actually taking each other into account—that if boa #2 shows up and sees boa #1, he’s more likely to stick near that first snake, because being together helps them. And ideally, you would also prove that when snakes hunt together, they’re more successful.

Of course, to do that for the Cuban boa, you have to hang out in a cave all night watching snakes dangle from the ceiling eating bats. And that’s exactly what Vladimir Dinets, an assistant professor at University of Tennessee, decided to do. He published his results in the journal Animal Behavior and Cognition. Desembarco del Granma National Park in eastern Cuba has one cave in particular where Dinets set up shop. Nine boas lived inside, which he could apparently tell apart by their markings because he is a snake whisperer, and for eight consecutive days he watched them hunt. The boas would slither up the walls at sunset and just before dawn to catch bats, hanging upside down from the ceiling of the passage that connected the roosting chamber to the exit where their leathery prey would have to pass by.

Keep in mind that all this goes down in almost complete darkness. They’re in a national park with little light pollution, inside a cave, at fairly dark times of the day. Dinets sat in a dark cave filled with snakes and bats and calmly recorded each and every movement that the snakes made. He divided up the passage areas into sections, so he could later monitor how close the snakes were to each other, and noted every time a new snake joined the fray. And then each and every time a snake caught a bat, he recorded that too. Not just the fact that a snake caught a bat, but which snake caught a bat.

The boas themselves aren’t bothered by the dark because they hunt by touch. When bats brush against them, the snakes strike. Dinets wasn’t bothered because he seems to be some kind of superhuman.

Boas who hunted alone were in the very tiny minority, and it’s no wonder—they were much worse at catching bats. With three snakes present, each boa caught an average of one bat per snake and usually did it in under seven minutes (the boas left once they caught a bat, so the maximum bat-ing average was one). If the snake was alone, that average dropped to 0.33 and it took them about 19 minutes to even get the bats they managed to get. Some lone boas actually gave up and went home. So when the boas entered the passage and encountered other snakes, they nearly always chose to set up camp alongside each other. Together they could form a kind of barrier, such that bats had a harder time avoiding the boas.

Unlike wolves, the boas didn’t otherwise hang out together. They’re solitary creatures. Wolves hunt together for primarily social reasons—multiple studies have shown that they don’t necessarily get more food by sticking with a pack. Snakes hunt together for the strategy. How cold-blooded of them.