The new sawsharks have been found in the Indian ocean. 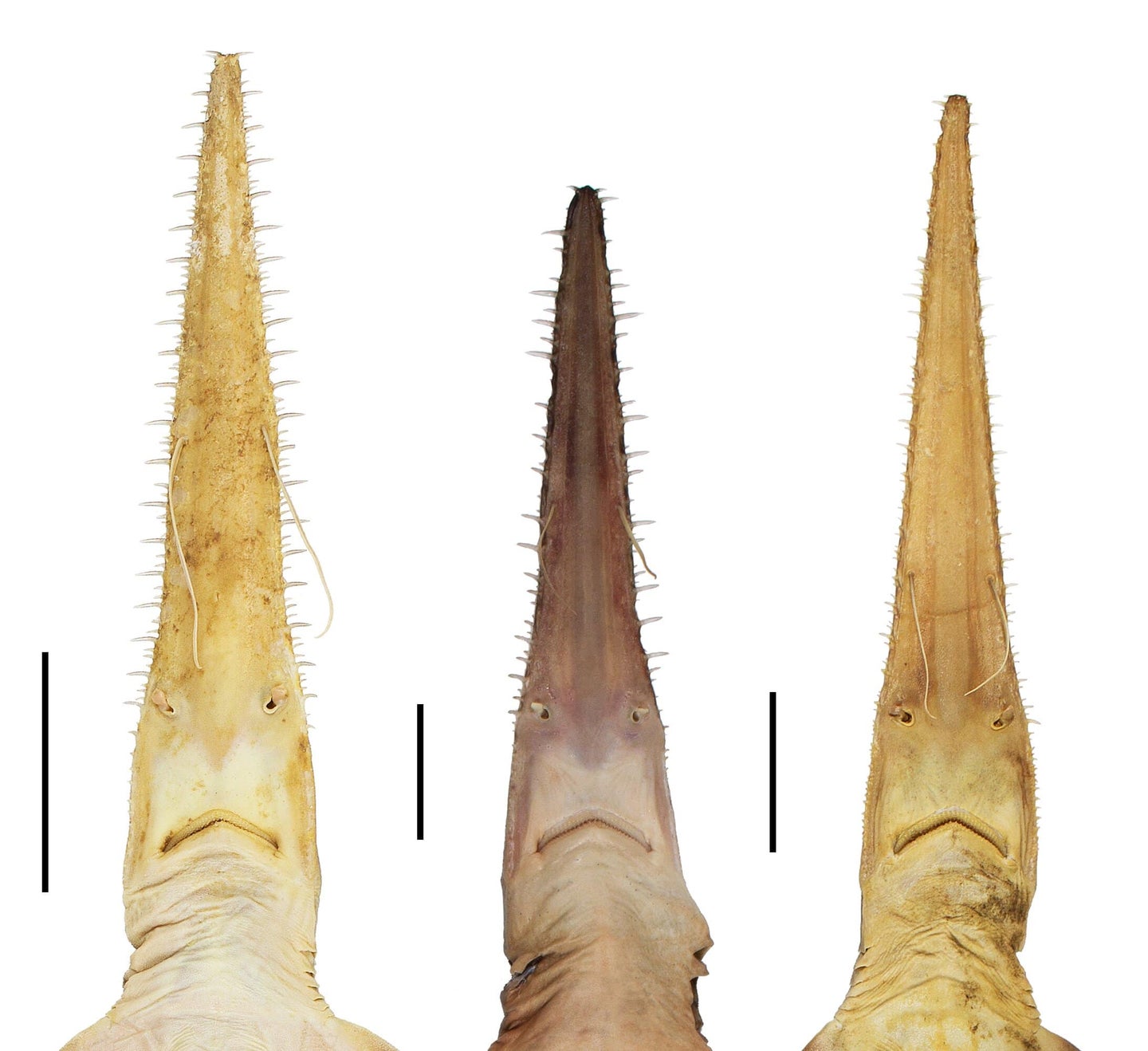 Sawsharks are known for their long, flat snouts studded with teeth, which they use to slash their prey to ribbons. Researchers have found two new species of this shark in the waters off eastern Africa. Courtesy of Simon Weigmann
SHARE

Researchers have identified two new species of shark in the waters off eastern Africa. The rare little creatures range from about three to four-and-a-half feet in length and belong to a group called sixgill sawsharks. Their discovery came as a surprise to scientists, who previously knew of only a single species of sixgill sawshark.

“The present study…[reinforces] both how important the western Indian Ocean is in terms of shark and ray biodiversity, but also how much we still have left to find,” Simon Weigmann, a marine biologist at the Elasmobranch Research Laboratory in Hamburg, told Popular Science in an email. He and his colleagues reported their findings on the new sharks on March 18 in the journal PLoS ONE.

Sawsharks are known for their long, flat snouts studded with teeth, which they use to slash their prey to ribbons. The sea animals have similar chainsaw-like mouths to another ocean fish, known as the sawfish, though they aren’t at all related. Sawfish are actually rays and can grow up to 23 feet long.

Most sawsharks have five gill slits on each side of their bodies, as is typical for sharks. Until now, the only sawshark species thought to have six gill slits—known as Pliotrema warreni—was found in the waters around South Africa and southern Mozambique.

This unusual feature doesn’t seem to play a vital role in the sharks’ survival. “The presence of six (or seven) gill slits per side is considered a characteristic of very primitive sharks,” Weigmann said. “There is no advantage known for them in having six gill slits.”

The first hint that P. warreni wasn’t the only six-gilled sawshark in the sea came in 2017, when a fisherman in the village of Andavadoaka in southwest Madagascar contacted Weigmann’s colleague Ruth Leeney, who is based at the Natural History Museum in London. At the time, she was studying sawfish in Madagascar. The fisherman told her that he’d just caught two of the rays. But the animals turned out to belong to an entirely new species of six-gilled sawshark rather than a new variety of ray. Weigmann and his team were able to identify several more members of this previously overlooked species in museum collections.

Then in 2017 and 2019, a few more of Weigmann’s colleagues mailed him two sawsharks that fishermen had captured as by-catch off the coast of Zanzibar. After a thorough examination, the researchers declared the specimens to be a third species of sixgill sawshark.

The newly recognized sharks were named Kaja’s sixgill sawshark and Anna’s sixgill sawshark in honor of Weigmann’s daughter and niece. Their snouts are shaped slightly differently from that of their cousin P. warreni. All three sharks have whisker-like organs called barbels that they use to detect food; they’re also found on catfish. However, the newly discovered sharks’ whiskers are placed farther from the mouth. It appears that none of the sixgill sawshark species have overlapping ranges.

“The identification and formal description of the two new species is extremely important for evaluating their rarity and population status, as well as for assessing their vulnerability to fishing operations,” Weigmann said. He is particularly concerned about Anna’s sixgill sawshark, which has, as of yet, only been seen in shallow waters, a location where it might easily end up in a fisherman’s catch by accident.