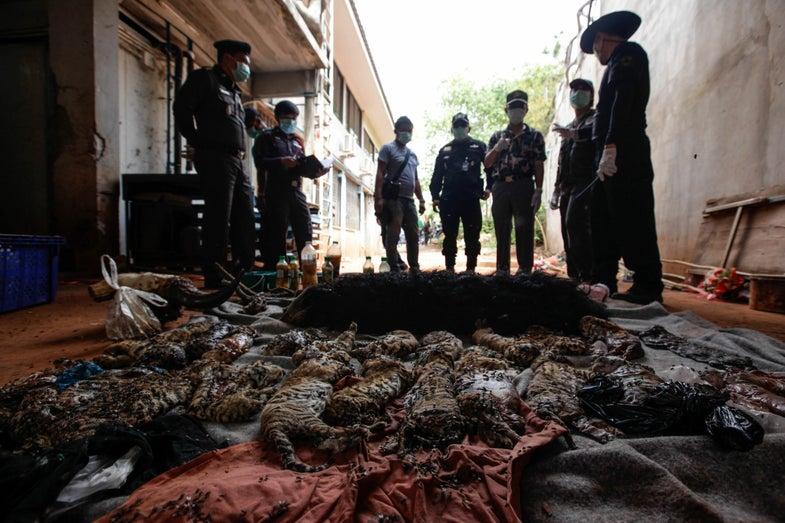 KANCHANABURI, THAILAND - JUNE 1: Thai DNP officers observe the carcasses of 40 tiger cubs and a binturong (also known as a bearcat) found undeclared at the Wat Pha Luang Ta Bua Tiger Temple on June 1, 2016 in Kanchanaburi province, Thailand. Wildlife authorities in Thailand raided a Buddhist temple in Kanchanaburi province where 137 tigers were kept, following accusations the monks were illegally breeding and trafficking endangered animals. Forty of the 137 tigers were rescued by Tuesday from the country's infamous 'Tiger Temple' despite opposition from the temple authorities. Dario Pignatelli
SHARE

40 tiger cubs, a bear, various horns, intestines, and other animal parts were discovered during a raid of Thailand’s “Tiger Temple” early this morning.

The Buddhist monks of the temple claim that the contents were saved in a kitchen freezer as evidence that they were not trafficked. The tiger cubs were all one or two days old when they died, and the cause of death is unclear at this time.

Wildlife officials will file new charges against the temple curators, the BBC reported. The charges, which are crimes against endangered species, carry a sentence of four years in prison and a fine of over $1,100.

The “Tiger Temple,” founded in 1994, claims it is a spiritual sanctuary for protecting animals. Visitors can choose different packages to experience time with the tigers and other animals, and can end up spending hundreds of dollars to interact with the animals and take pictures. National Geographic estimates that the temple makes more than $3 million a year. This follows April allegations from a former veterinarian at the temple, who accused the temple owners of trading multiple tigers to a tiger farm in Laos.

The temple refutes the trafficking allegations and claims that tiger cub mortality is high naturally, even within the temple. Tiger cubs have been saved in the freezer since 2010, when a former veterinarian decided to stop cremation and save the bodies, said the group in a Facebook post. 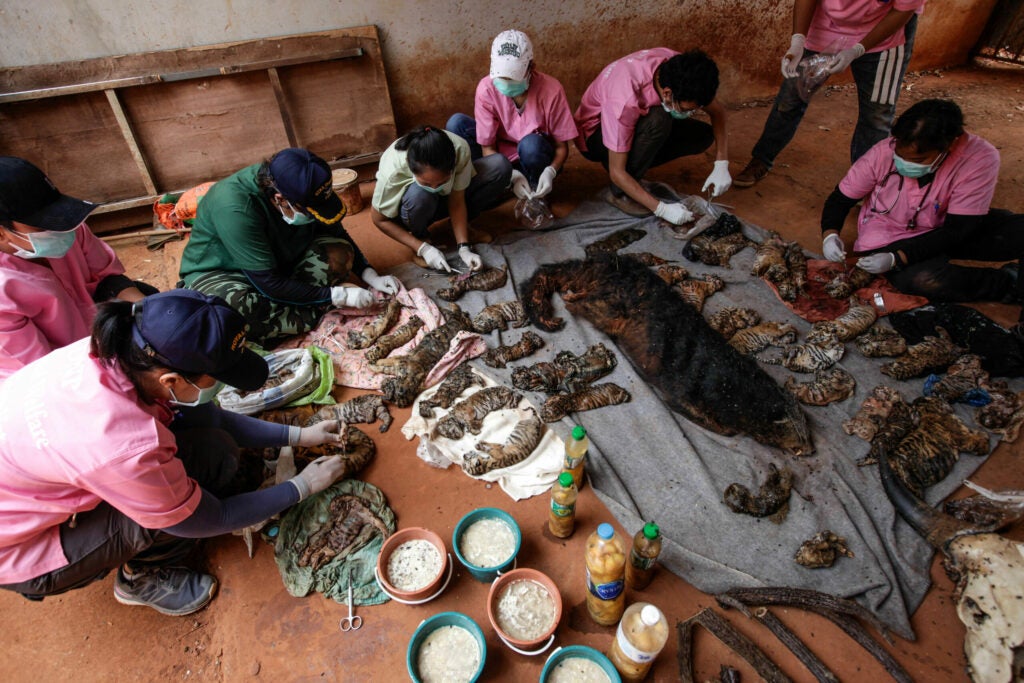 Tiger and other animal parts found in “Tiger Temple” freezer

Wildlife officials said charges will be filed against the temple monks for violating endangered species trade and care statutes.

This find adds to a list of allegations against Tiger Temple from government officials and nonprofit organizations, including illegal breeding of endangered species, animal exploitation, and trafficking wildlife.

The trade and care of tigers and their parts are regulated under the Convention on International Trade in Endangered Species of Wild Fauna and Flora (CITES). Tiger bones and other body parts are a huge money maker on the black market, where they are bought for traditional medicines.

Earlier this week, the Thailand Wildlife Conservation Office and the police began removing tigers from the temple, Wat Pa Luangta Bua Yannasampanno, west of Bangkok near the Burmese border. Eighty-five tigers remain at the temple, while fifty-two were removed.