Scientists aren't sure why they stranded themselves in the mangroves 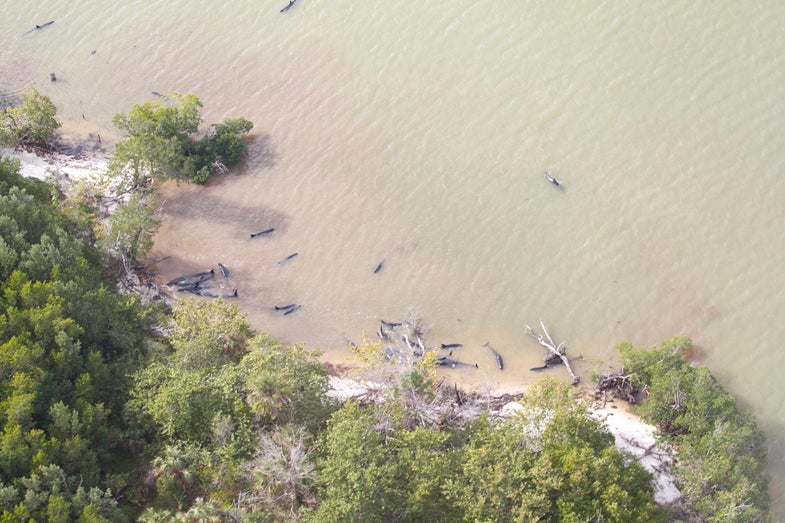 Ninety-five false killer whales—a type of dolphin that looks, you guessed it, like a killer whale—got stranded in mangroves, mud and shallow water off the coast of Florida this weekend.

Of those, 72 ultimately died of natural causes, 10 were euthanized and 13 remain unaccounted for. “For those 13 whales, I wouldn’t be overly optimistic that they’re still alive at this point,” said Erin Fougères, a marine mammal biologist with the National Oceanic and Atmospheric Administration.

The pod was first spotted on the morning of Jan. 14 in Everglades National Park. This was unusual because the water in the area is very shallow; false killer whales typically spend their time at depths of 3,000 feet or so.

Members of NOAA’s stranding network, which responds to reports of marine mammals in crisis, were dispatched to the site. Despite their efforts, which included pulling a calf out to open water to lure the rest of the pod away from the shallows, they were ultimately unsuccessful and soon “the light was fading,” Fougères says.

When the rescue boats returned the next morning, most of the animals were dead. The rest were so sick that veterinarians decided euthanizing the creatures was the only humane course of action.

This is only the third time in recorded history that a pod of false killer whales has stranded themselves in Florida, according to local news outlets.. In 1986, 28 animals were stranded in Key West. Just three years later, three of the mammals beached at Cedar Key, near Tampa.

Despite the relative infrequency of this event in American waters, it’s not altogether uncommon. “In this particular species—in a social species—they are known to mass strand,” Fougères says. The largest ever whale stranding event occurred in 1946, when about 835 false killer whales stranded themselves in Mar del Plata, Argentina.

The reason behind the latest stranding event remains unclear and may never be fully understood, Fougères said. But scientists on the ground did collect a number of biological samples with the intent of autopsying the whales to better understand what occurred.

In the past, stranding has been attributed to a number of different causes, including the tight-knit relationships between whales. “In highly social species, one or two whales could become sick or disoriented and potentially the rest of the whales could follow them to shore,” Fougères says.

Other reasons include disorientation caused by human-produced sonar sounds, tidal changes, weather, biotoxins like red algae, and perhaps even shifts in an animals’ perceptions of the magnetic field of the Earth.

Just as scientists struggle to understand the underlying cause of these mass strandings, the responders trying to help in the animals in the field also come up short.

In this instance, they were hampered by the remoteness of the stranding site, which took between one hour and 90 minutes to access, Fougères says. The size of the animals was also a hindrance: false killer ways can be as long as 20 feet and weigh up to 1,500 pounds.