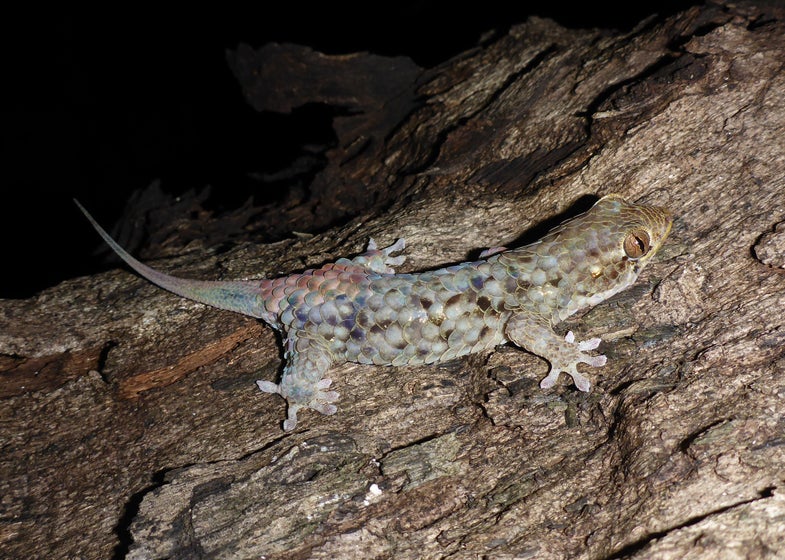 Deep in the sharp limestone ridges and thick vegetation that define Madagascar’s Ankarana National Park, a predator stalks its prey. It lunges forward, biting down on a tasty gecko morsel, only to find itself with a mouthful of scaly skin. The meat, meanwhile, scurries away to live another day.

Fish-scale geckos from Madagascar all share the unique ability to wriggle out of their own skin, escaping both predators and researchers trying to study the elusive genus of lizard. In a study published Tuesday in PeerJ, herpetologists announced that they had definitively identified a new species in the bunch, Geckolepis megalepis. The gecko is easily identified by its inordinately large scales—when it happens to be wearing them, that is.

“Not many people are interested in studying them because they are such a nightmare to study,” says lead study author Mark Scherz.

If it manages to elude its captors even once, the slippery gecko loses its distinctive scales in the process, making careful study of exterior characteristics nearly impossible. And the new species is even more prone to scale-slippage than many of its relatives. So Scherz and colleagues were forced to look within, taking CT scans of the gecko’s skeleton to characterize its shape, which the gecko can’t just shake off.

“It was really important that we have something reliable and unchangeable in relation to the scales,” Scherz says.

The CT scans of the gecko’s bones also help other researchers, like herpetologist Aaron Bauer, a gecko expert at Villanova University who was not involved with the study. For Bauer, who studies the evolution of geckos, there’s no such thing as too many CT scans.

“We’re finally getting to a point where we’re building up enough scans of enough different species that morphological data can really help us look at relationships between species,” Bauer says.

It can also help distinguish species like Geckolepis, which have the rather unsettling tendency to rip off their entire skin when cornered by a perceived threat. 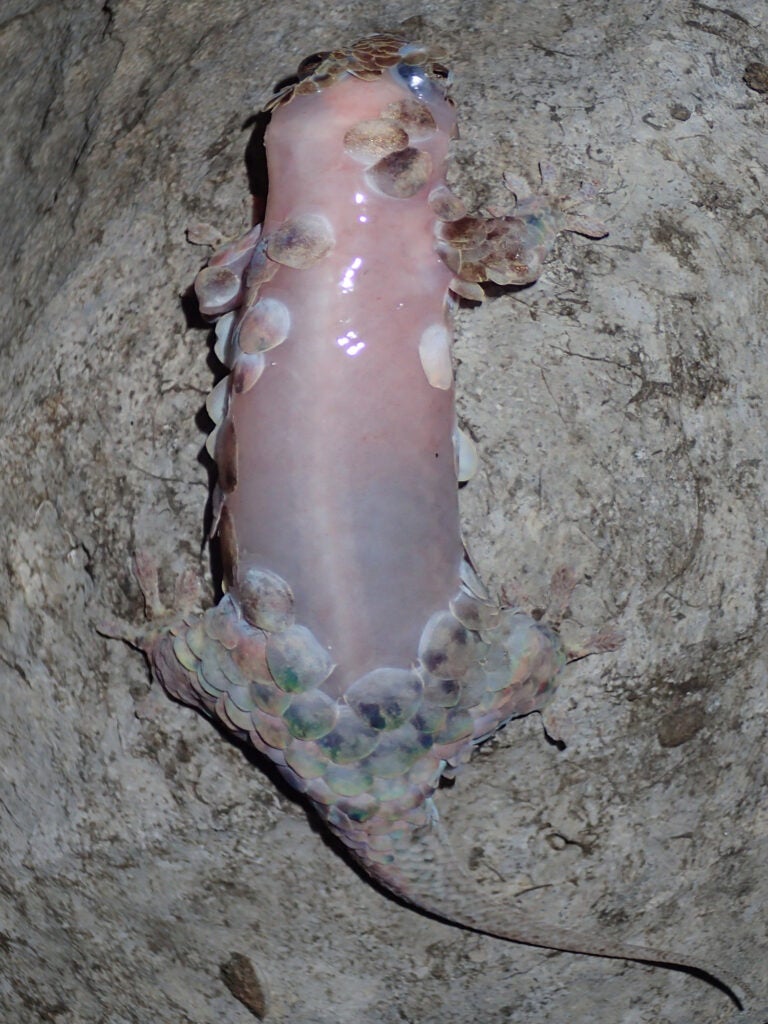 “They rely on a predator to put pressure on the skin, then they spin and the friction rips the scales off. It is quite an expensive way to escape,” Bauer says. He’s experienced the sudden shock of holding a Geckolepis gecko, only to be left with a handful of scaly skin. But, he adds. “If it’s that or be eaten, it’s a no brainer.”

The skin removal is traumatic, unlike a snake shedding it’s skin. Snake skin—and human skin—only flakes or peels away when a new, healthy layer of skin is ready underneath. But this gecko’s scales leave only tender, unprotected flesh behind.

“If this were a mammal you’d have huge immunological problems. You could think of it as if you had serious burns over most of your body,” Bauer says.

But unlike a mammal, Geckolepis has the incredible ability to grow back its skin and scales without any observable scarring—and it can do it in a matter of weeks.

It’s an astounding ability, but one that hasn’t gotten much attention in the biomedical community, say both Bauer and Scherz. While it’s nice to imagine burn victims being able to regrow their skin with the help of some gecko-inspired tech, our basic understanding of how the geckos can strip off and regrow their skin must advance much further before it can be applied to any other species, much less our own. And since these fragile skin-crawlers are so difficult to study, that knowledge could be a long time coming.

Moral of the story: be thankful that for humans, getting scared out of your skin is just a metaphor.