Frogs use elastic tongues and reversible spit to catch prey

Check out these spitting images 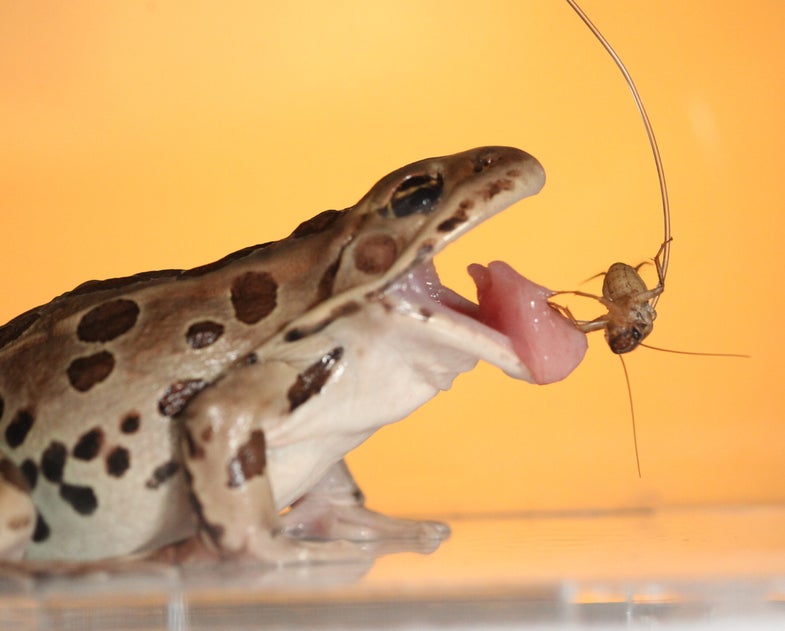 Imagine all the things you could do if you had a long, sticky frog tongue. Perhaps you’d catch bad guys as they tried to run away or—no less admirably—grab a beer from the fridge without taking your eyes off the game.

Whatever shape your amphibious aspirations may take, they’re closer than ever to becoming a reality, thanks to a new paper in the Journal of the Royal Society Interface that breaks down the mysterious biomechanics of frog mouths.

To a human finger, a frog’s tongue feels a lot like chewed gum. When you pull your finger back, the bond between you and the frog doesn’t break. Instead, the tongue moves with you—at least for a moment.

The new research, says lead author Alexis Noel, reveals the stickiness has a bit to do with the structure of the frog’s tongue. . . and everything to do with its saliva.

When a frog’s tongue first makes contact with its prey, the appendage stretches, wrapping itself around the bulk of the insect’s body. “If you imagine the tongue was very stiff like the human tongue, you wouldn’t have much coverage,” Noel says, and you might even push your food farther away.

But the frog’s tongue is “one of the softest bio tissues known,” she says, similar to the squishiness of brain tissue and a whole 10 times softer than the human tongue. So the tongue acts like “shock absorbers on a car,” hitting the prey with just the right amount of force.

That’s where the saliva comes in. When the spit first hits the insect, it becomes very watery, allowing it to fill the nooks and crannies of the insect’s body. The more coverage the frog has, the tighter its grips on dinner becomes—kind of like the way a quarterback gets better at handling a ball the larger his hands are.

As the frog reels its meal back into its mouth, its saliva becomes stickier—“more viscous than honey,” in Noel’s words—ensuring that the insect stays along for the ride.”If you can believe it, it’s a reversible adhesive,” she says.

This change in the thickness of the frog spit was related to the speed at which the saliva travelled, according to the study. That puts frog saliva into a class of shear thinning, or non-Newtonian, fluids, along with synthetic materials like paint. In a bucket, paint is thin and wet and can be transferred to a wall. Once it’s on the wall, it doesn’t run, even if it’s still wet, because the fluid has actually thickened.

To do these analyses, Noel and her team took a multi-pronged approach. They filmed dozens of frogs in slow-motion and analyzed the mechanics of their feeding. Noel also scraped 17 frog tongues to get a big enough saliva sample to poke and prod under the microscope. (“It was lovely,” she says of her time spent scraping.) And they compared their work to other research on frogs and chameleon mouths.

The research also showed how frogs are actually able to swallow their food: to generate the speed necessary to turn their sticky spit watery again, they push their eyeballs back into their heads and into their tongue. This rapid eye-popping forces the saliva to relax its grip and sends the doomed bug sliding down the hatch.

Noel hopes her research will lead to new technologies. Personally, she’s hoping for a frog-copter that flies around the office picking up USBs and other necessities. Practically, she thinks her work will probably focus on designing advanced adhesives.

“Let’s say you were picking up microchips from a conveyor belt,” Noel says. “You could use this very soft adhesive mechanism to grab these objects very fast and without damaging them.” The only trouble? Your microchip may come with a side of saliva.