These mystical rings may be created by termites 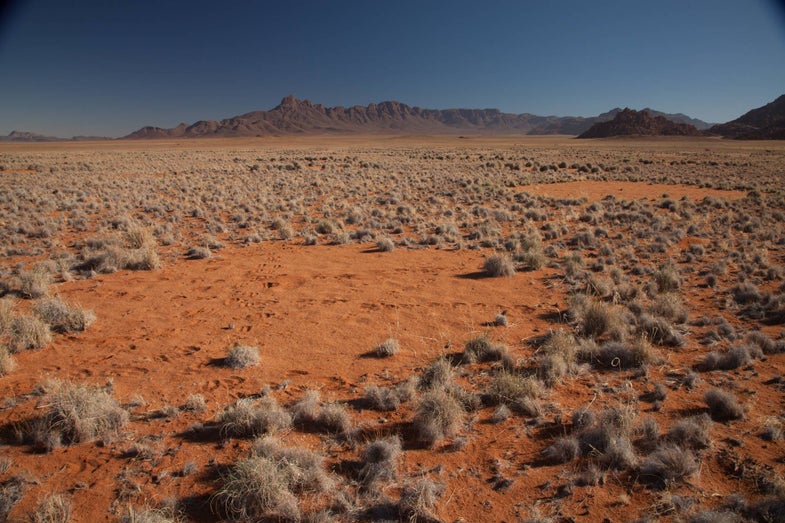 You know you're kind of obsessive when those three stray bushes bother you. Jen Guyton
SHARE

If you were wandering through the Namib Desert and found vast stretches of grassland pock-marked by bare circles, you might think something supernatural was at play. Just like you might think rocks that seem to move on their own are driven by a power not of this world. But now both of those mysteries have something in common: totally natural explanations.

The Himba people of Namibia say fairy circles are the “footprints of the gods”, made by their ancient ancestor Mukuru. Tour guides have since taken it upon themselves to make up even more exciting stories about dragons’ breath—presumably because they thought a walking god wasn’t interesting enough. And they don’t only occur in Africa—in 2016 researchers found them in Australia, too. But the strange circles went largely unexplained until 2013, when a German scientist proposed a far more terrestrial explanation: termites.

Trouble was, he fell victim to one of the classic blunders of scientific inquiry. Correlation doesn’t imply causation (the most famous example of this is the idea that one should never get involved in a land war in Asia). His theory was based on the (admittedly thorough) observation that nearly every fairy circle had a termite nest at the center. But other researchers quickly pointed out that something about fairy circles might simply make them attractive to termites—their presence didn’t mean they caused the phenomenon. Later in 2013, two scientists proposed that the circles were actually the result of vegetation spacing itself out through competition for nutrients.

Neither termites nor competitive shrubberies can completely explain fairy circles on their own. The termite hypothesis works for the locations that scientists happened to study, but it doesn’t provide a fundamental explanation of how the circles form in general, even though it has some empirical evidence to back it up. And the vegetation idea has the opposite problem: it doesn’t have much empirical evidence, but it does offer a method by which fairy circles could form.

So why not both? Why not indeed. A group of international researchers asked themselves that same question and used a complex computer model to find the answer. And guess what? It’s totally both. Probably. As is the case with a lot of ecological research, these causation experiments (as opposed to correlational ones, like observing that termites happen to nest at the center of fairy circles) are difficult to undertake. The researchers modeled fairy circle formation using data collected in the field, analyzing how social insects like termites and the surrounding vegetation might interact. They published their findings in the journal Nature on Wednesday.

When termites nest in arid land, like the Namib Desert, they make the soil more fertile. The ground can hold more moisture and the termites break down animal and vegetable bits to put nutrients back into the earth. But since that creates a giant network of tunnels beneath the ground, plants can’t grow right of top of the nest—they need solid soil to snake their roots into. The result is a bare patch over the termite mound, plus a surrounding disk—because termites expand out in a roughly circular pattern.

At the edge of that termite circle, you have a ring of land with more moisture than average and no pesky tunnels to boot. Grasses develop extensive root systems to make the most of all that wonderful water, and voila: a ring of tall grass ‘magically’ appears around the bare circle over time.

In other parts of the world, termite mounds can actually have the opposite effect, but for the same reason. They produce patches of green in otherwise lifeless deserts, because some plants take advantage of the increased soil moisture and grow shallow root systems over the termite tunnels.

And so the cold hand of science strikes yet another blow to mysticism. We may not have that fable anymore, but at least we have a Douglas Adams quote to remind us of the real magic in this world: “Isn’t it enough to see that a garden is beautiful without having to believe that there are fairies at the bottom of it too?”

I think that’s a yes.