10 most powerful animal bites on the planet

Fearsome apex predators with the strongest jaws in the world. 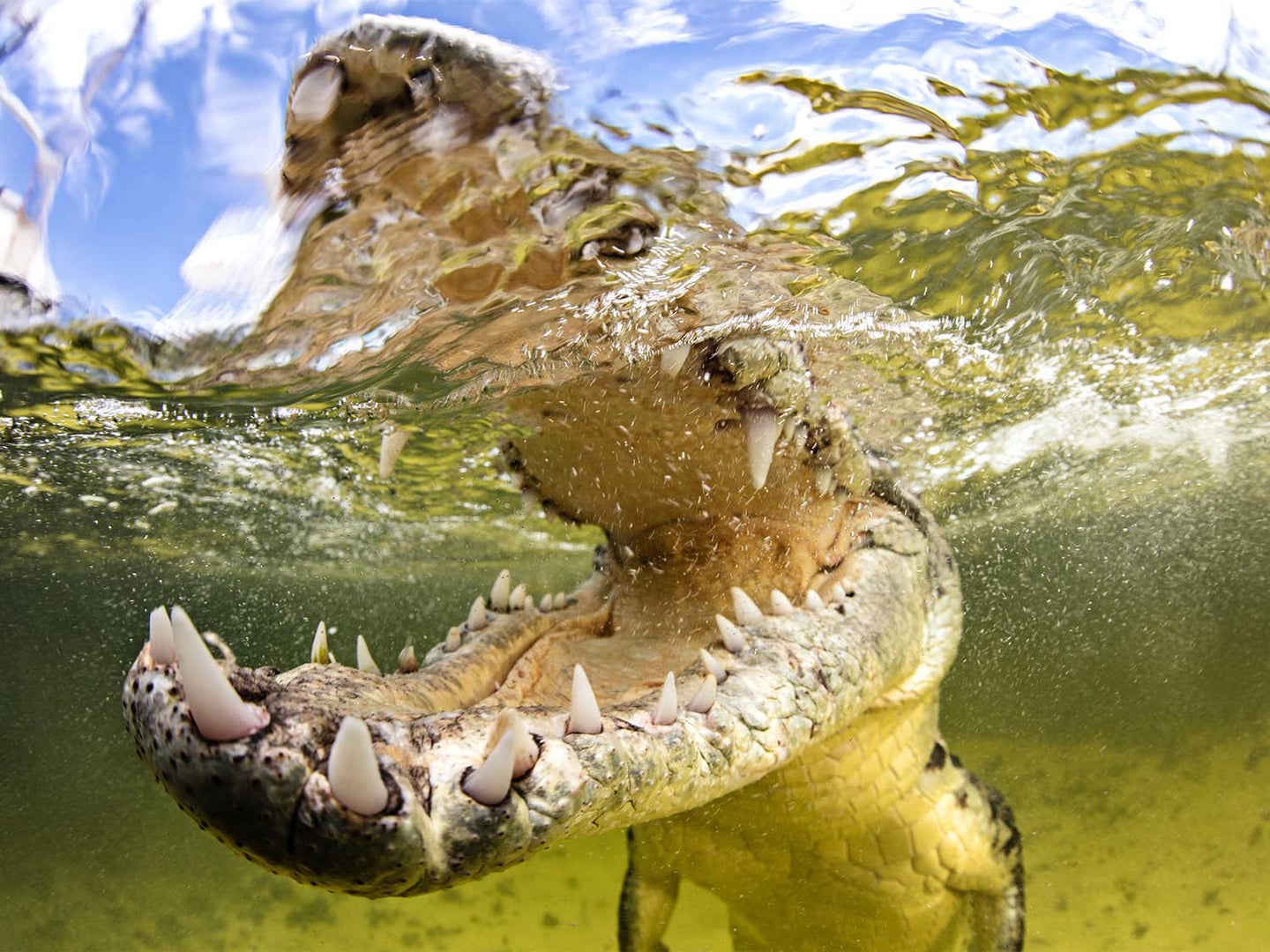 This article was originally published on Field & Stream.

Wild animals bring many awe-inspiring physical traits to their battle for survival, including the ability to use their teeth and jaws for self-defense and feeding. Not surprisingly, nature’s strongest jaws often belong to apex predators who sit comfortably atop the food chain, and collecting hard data on the force of their bites can be a decidedly risky proposition. Researchers have used a number of methods, from direct measurement to computer software modeling, to estimate the forces at work in nature’s bite club. Expressed as PSI (pound-force per square inch, a pressure of one-pound of force applied to a surface area of one square inch), here’s how some of the strongest jaws in the wild stack up.

In 2008, a team of Australian scientists led by Steve Wroe used sophisticated computer modeling based on multiple x-ray images of shark skulls to estimate that a 21-foot great white shark can produce nearly 4,000 PSI of bite force. Because bite strength in sharks is highly dependent on size; the much more common 11- to 15-foot great whites would pack considerably less punch than a similarly sized croc. And Wroe’s projections, unlike Erickson’s findings, have not been directly measured in field tests. Volunteers, anyone?

Dr. Gregory Erickson, professor of anatomy and paleobiology at Florida State University and curator of the school’s Biological Science Museum, conducted a 10-year study to scientifically measure jaw strength in all 23 crocodile species. Erickson and his team placed a specially designed bite force transducer—which he likens to “an expensive bathroom scale” wrapped in “protective layers of bullhide”—between the jaws of multiple crocodile specimens. The highest reading, 3,700 PSI, was registered by a 17-foot saltwater croc. “It’s the highest bite force ever recorded,” Erickson says, “beating a 2,980-PSI value for a 13-foot wild American alligator.”

Notably, the team’s data allows projections of bite-force strength in now-extinct crocodiles found in the fossil record, including 40-footers estimated to have been capable of generating 23,000 pounds of force. That surpasses estimates for Tyrannosaurus rex, which Erickson estimated, in a 2017 study, probably had a bite force around 8,000 PSI.

“If you can bench press a pickup truck, you can escape a croc’s jaws,” Erickson says. Otherwise, “It is a one-way street between the teeth and the stomach of a large croc.”

With tusks that can grow two feet long, a mouth that opens 180 degrees, and a bite that can crush a whole watermelon like a grape, hippos likely have the strongest jaws of any herbivore on the planet. Territorial and potentially aggressive, hippos are particularly hostile to crocodiles and are said to be capable of biting a 10-foot croc in half. The bite force of females have been measured at 1,800 PSI; males have reportedly proven too aggressive to test.

The largest cat in the Americas is also the strongest biter of any wild feline. Unlike all other cats, which mostly go for the throat to dispatch their prey, the jaguar kills by biting its victim’s skull and is capable of puncturing a turtle’s shell with its teeth.

It not so much the teeth, but the massive neck and jaw muscles that give the gorilla one of the most powerful bites in the primate kingdom. They’re herbivores, yes, but their diet includes much tougher stuff than bananas: The gorilla’s strong molars allow them chew heavy shoots, bark, nuts, tubers and other fibrous foods. Long, sharp canines seen in mature males are mostly for display.

Unlike most bears, whose teeth are designed to handle both flora and fauna, polar bears are exclusively meat eaters—hypercarnivore is the term. As a result, their bite is well adapted to dealing with the kind of prey they encounter in the Arctic: thick-skinned, heavily-feathered or, occasionally, North Face-clad. Polar bears are said to be the only mammal that actively hunts humans.

Read Next: 10 Most Venomous Snakes in World

Hyenas are skilled hunters that often make their own kills, but their tremendous jaw strength also allows these African mammals to profitably scavenge carcasses other predators leave behind. Dual-purpose teeth allow them to shear flesh and crush bone, and large jaw muscles combined with a unique arched structure that protects the skull against the forces generated by their own bite makes hyenas particularly efficient scavengers: When a hyena pack descends on a kill, there are rarely any leftovers.

Boasting the longest canine teeth (2.5 to 3 inches) of all cats, Bengal tigers present a fearsome display; they also have the force to back it up, delivering more than a thousand pounds-per-square inch of pressure—almost twice as much bite force as the king of the jungle.

Mythologized for their purported ability to decapitate a moose with a single swipe of their massive paws, grizzlies also have one of the more fearsome set of choppers in the wild. Doctors in bear country have developed antibiotic cocktails to fight the deep-tissue bacterial infections that survivors of grizzly bites often face. Their bite force is said to be strong enough to crush a bowling ball.

Lions have a bite force of only 650 PSI, which is not much stronger than the hardest-biting domestic dog, the English mastiff (550 PSI). But lions are social creatures that hunt in groups and consume their kill where it falls, which may lessen the need for individual jaw strength, some researchers have hypothesized. By comparison, humans exert a bite force of around 160 PSI when we clamp down—good enough to power through a tough steak sandwich, but nowhere near adequate for bringing a wildebeest to bay.

Correction (December 2, 2021): The rankings of the great white shark and saltwater crocodile have been corrected to no. 1 and no. 2, respectively. They were previously swapped.