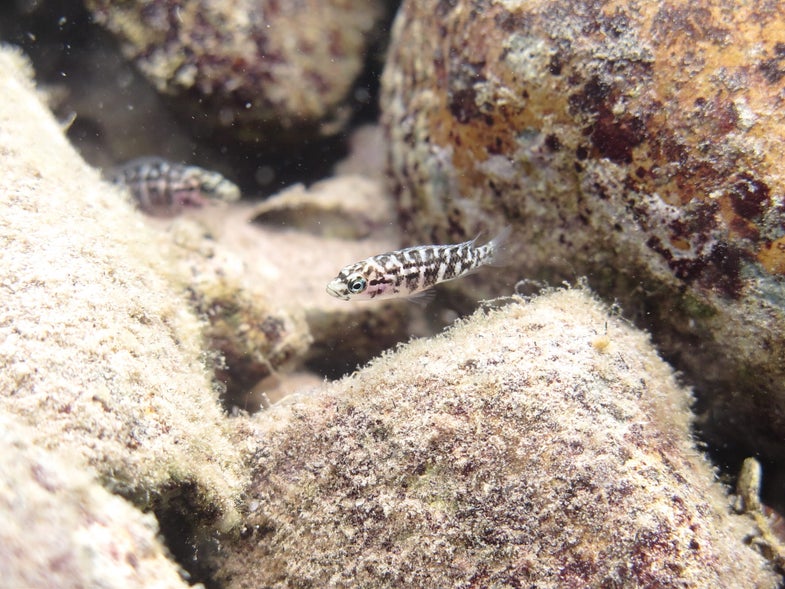 A small, mysterious creature found only in a single lake in Zambia has become the first known case of a fish that uses teamwork to trap prey.

Neolamprologus obscurus lives in groups that dig out little refuges under the rocks at the bottom of Lake Tanganyika. These crevices may also attract shrimp, which try to hide in them during the day, scientists reported March 6 in the journal Behavioral Ecology and Sociobiology. The more fish are on hand, the larger the burrow they can build—and the more shrimp it can catch.

Groups of N. obscurus are headed by a high-ranking female with a troupe of one to 10 male and female assistants who help protect her young from predators. The helpers may also clean her eggs, “just mouthing [them] a bit to remove the bacteria,” says Hirokazu Tanaka, a researcher at the Institute of Ecology and Evolution at the University of Bern in Switzerland who led the new study. The helpers, which grow up to 2 inches long, are responsible for digging and clearing out sand that has fallen into the shelters as well.

Not much else is known about N. obscurus, partly because it spends so much of its time literally living under a rock. “We couldn’t really see what it’s doing inside the shelter,” Tanaka says. However, he did notice that while several other fish in the lake also dug hollows under the stones, those of N. obscurus were deeper. He also knew that the fish weren’t the only creatures taking refuge under the rubble. Shrimp—a favorite meal of N. obscurus—rise up through the water at night to feed. When dawn arrives, the shrimp sink back down and hide.

To find out if N. obscurus’s large burrows might be used to lure in unsuspecting shrimp, Tanaka planted plastic boxes of different sizes on the bottom of the lake. These manmade shelters were lined with rocks and left to sit overnight. The larger the box, the more shrimp Tanaka and his team found inside the next day. They also found shrimp in the bellies of both helpers and breeding fish.

Then the researchers counted how many helpers dwelled in different groups of N. obscurus. The larger the shoal, they found, the greater the size of its burrow. Finally, Tanaka captured helpers from different groups and returned a week later to check on their shelters. With one less helper to clean out sand and other debris, the dens had begun to shrink.

All this suggests that the helpers enlarge their shelters to attract more shrimp for the entire group, Tanaka says. However, the helpers might not get to enjoy much of the spoils. It’s not clear how the fish share the shrimp they have caught, but Tanaka suspects that the reigning breeder may claim much of the food for herself.

Still, the helpers do get a few perks from the arrangement. Members of N. obscurus that live alone must build and maintain an entire shelter by themselves. Working in a group means that each individual fish doesn’t have to spend quite as much energy on their home’s upkeep. It’s also easier to chase off predators when you’re part of a group. And the helpers are usually siblings, cousins, or other relatives of the breeding female. So by helping her raise her young, the helpers are still passing on their genes indirectly.

There are a few other cases where animals work together to make traps—some group-living spiders build large webs to capture prey that they share amongst themselves. It’s possible that other fish work together to catch prey this way as well, Tanaka says.