This weather pattern could complicate your Thanksgiving travel 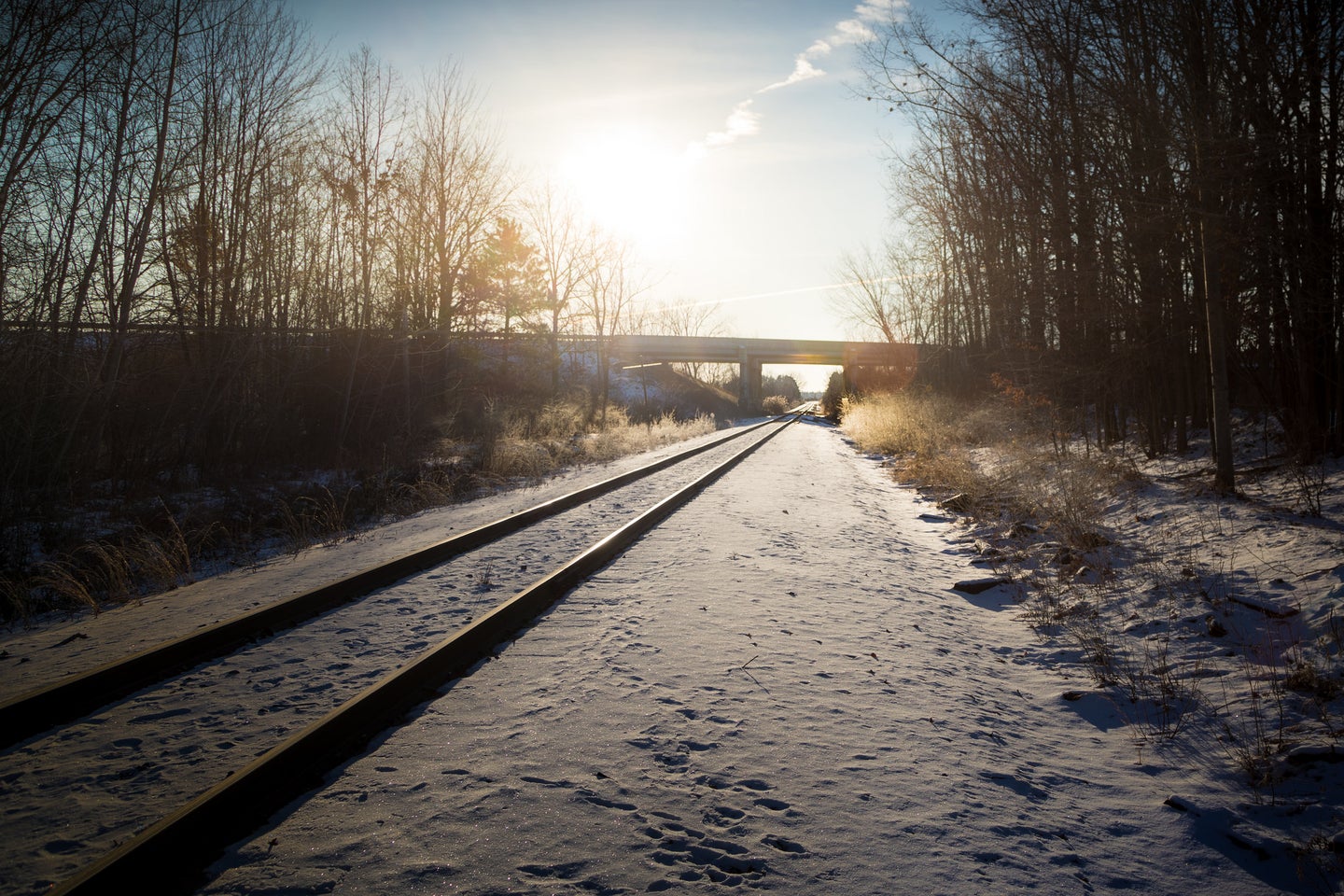 Last weekend, a big chunk of the United States got slammed with frigid weather. And there won’t be much of a reprieve. Unseasonably cold temperatures and possible storms will return to the Midwest and eastern states ahead of Thanksgiving.

The weather pattern responsible for this mischief is called a Greenland block. It happens when atmospheric pressure builds over Greenland and forces the jet stream to dip into eastern North America. Greenland blocking conditions will form this weekend and likely stick around into Thanksgiving week, the Weather Channel reports.

A Greenland block can lead to some wonky weather. In 2012, this weather pattern punted Hurricane Sandy into the coastal Northeast. It’s also contributed to polar vortex intrusions and record-breaking melting on the Greenland ice sheet.

The good news is we aren’t going to see anything quite that extreme this time. However, it will be bitingly cold—and conditions will be more favorable for storms. Here’s what you need to know about this weather pattern.

Why is this happening?

A block is an area of unusual pressure that forms in the atmosphere and deflects storms and winds. “It’s kind of like if you were to stick a rock in the middle of a river,” says Kyle Mattingly, a graduate student in geography at the University of Georgia in Athens.

Greenland blocks develop in the far Northern Atlantic, in the vicinity of Greenland or Iceland. This can happen when storms pump warm air northward, Mattingly says. As it reaches the jet stream, that warm air circulates in such a way that it piles up above Greenland, increasing air pressure.

This typically pushes the jet stream south, and warps it so it becomes wavier, sending a blast of chilly air to parts of the eastern United States and Western Europe. Meanwhile, the polar lands under the block become warmer. Prevailing winds that flow from west to east across the Atlantic can also slow or change direction. “That typical pattern, where you have cold to the north and warm to the south and strong westerly winds between, reverses,” says Stephen Baxter, a meteorologist at the National Oceanic and Atmospheric Administration’s Climate Prediction Center.

Will it ruin my Thanksgiving travel plans?

That depends on where you are.

Greenland blocks bring a greater chance of storms and often lay the groundwork for nor’easters, which blow in from the Atlantic Ocean. When a Greenland block is in place, airflow is slow enough that little disturbances in the atmosphere can stick around, link up, and become large storms. A Greenland block also pushes the tracks that storms follow farther south over the Eastern seaboard. Blocking patterns can give a storm time to develop and strengthen off the East Coast instead of moving quickly out to sea.

It’s not very likely that a major snowstorm will take advantage of these conditions in the days leading up to Thanksgiving along the East Coast. “Right now the pattern is not such that we would favor a big storm off the Eastern seaboard, but there is more uncertainty over the East Coast,” Baxter says.

“If we were in January or February, meteorologists would be very excited about the potential for some kind of nor’easter-type storm,” he says. But it’s still a little early in the season to expect that kind of storm.

However, the impending cold front could bring snow to the Great Lakes region, Adirondacks, and northern New England early next week.

What else can we expect?

Much of the mid-Atlantic, New England, and southeast Canada will be unseasonably cold as we head into Thanksgiving. On average, temperatures will probably be 5 to 10 degrees chillier than normal, but the coldest days are likely to be 8 to 16 degrees below average, Baxter says. Wet, windy weather is also possible. On the other side of the block in central Europe, temperatures will also take a dip.

The Greenland block will probably stick around for at least a week, with lingering impacts possible through the end of the month, Baxter says. “You have colder conditions kind of locked in place from southeast Canada to the eastern U.S.”

It’s common for a Greenland block to persist for one to two weeks, but meteorologists have a hard time predicting how long each one will last. “That can vary pretty dramatically. Sometimes you’ll get blocking conditions that will stay in place for up to a month,” Mattingly says.

Meanwhile, there is a chance that small pieces of the polar vortex will break free and graze the Great Lakes and Northeast with quick blasts of arctic air, AccuWeather forecasts.

The polar vortex is a low-pressure area around the North Pole with high swirling winds. When this maelstrom gets disrupted in winter, a piece of the polar vortex can escape. As it swings southward, temperatures can plunge 20 to 30 degrees below normal.

Is a Greenland block why last weekend was super cold?

The East Coast and Midwest did experience record-low temperatures this past weekend, but that blast of bitter cold was not caused by a Greenland block. Instead, it was fueled by blocking over the North Pacific that allowed a mass of intensely cold air to spill down into the northeastern United States and southeast Canada, Baxter says.

However, a Greenland block sometimes will form repeatedly throughout the winter. “These patterns will pulse in and out,” Baxter says. This makes for a cold, snowy season, as happened during the infamous winters of 1995 to 1996 and 2009 to 2010. For now, it doesn’t look like we’re in for that this year.

This weather pattern can occur in summer, too. Mattingly and his team are investigating a Greenland block that formed in July 2012. It brought such toasty temperatures to its immediate vicinity that it caused the most extensive melting of the Greenland ice sheet in recorded history. It appears that summer Greenland block patterns are becoming more extreme.

What about Hurricane Sandy?

Hurricane Sandy’s westward turn in 2012 was a pretty unusual track for a storm to follow. These storms tend to move poleward during October and are pushed east by the prevailing westerlies. “As Sandy moved north from the Caribbean into the Western Atlantic it was following a pretty typical October tropical cyclone path at that point,” Mattingly says.

But an intense Greenland block forced it to change direction. “They can’t go through it so they have to go around it, and in this case Sandy ended up being steered due west into New Jersey,” Mattingly says.

That Greenland block was particularly extreme. Mattingly and his colleagues discovered that it was one of the strongest on record for that time of year. “The fact that this anomalous westward turn of Sandy happened during such an intense, almost unprecedented Greenland blocking episode was definitely something of note,” he says.

The team also examined whether other North Atlantic hurricanes were similarly affected by Greenland blocking conditions. It turns out that when a hurricane did diverge from the normal northeasterly track, there was a better-than-normal chance that a Greenland block was in place.

Are we going to see more of that in future?

Maybe. It’s not clear how Greenland blocking patterns will evolve in coming years. Climate models have a hard time portraying the North Atlantic jet stream, so they struggle to predict Greenland blocks in the present day, much less the future, Mattingly says.

Some researchers believe that Greenland blocks will happen more frequently because the Arctic is warming faster than the rest of the world. The amplified warming could lead to a more disruptive “wavy” jet stream and feed these high-pressure areas. This, in turn, would thaw ever-greater patches of the Greenland ice sheet.

But others argue that Greenland blocking will decrease in future. If climate change pushes the jet stream further north, there would be less opportunity for Greenland blocks to develop, Mattingly says.

“If there is more blocking in the future, we expect there to be more unusual hurricane tracks,” he says. “But the million-dollar question is whether blocking is actually going to increase or decrease with climate change.”