Corals grow in patterns, even if we can’t always see them

There’s a method to the reef madness. 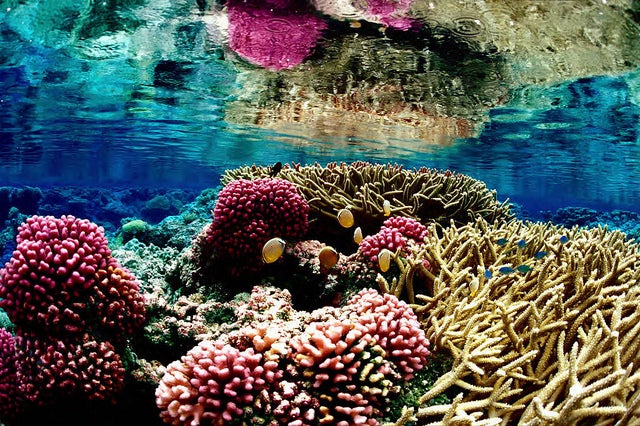 The colorful riot of a coral reef might seem chaotic, but new research indicates that it’s actually far from random. Scientists have created 3D maps of 17,000 square feet of reefs and discovered that corals grow in patterns. Some species huddle close together, while others are less densely packed. These clusters could protect the corals from danger and give conservationists a blueprint for how to rebuild damaged reefs.

“What was surprising was how even the ones that seemed random were not random,” says coauthor Clinton Edwards, a marine ecologist at the Scripps Institution of Oceanography at the University of California, San Diego. “There’s a level of organization that the human eye can’t really catch.”

To understand how corals are spaced, he and his colleagues swam over the reefs at the Palmyra Atoll National Wildlife Refuge, which lies about 1,000 miles south of Oahu, Hawaii. They photographed more than 44,000 coral colonies from multiple angles, then fused the images together to create three-dimensional maps.

The team then analyzed how various species were scattered across the landscape. They counted the number of corals at different spots on the reef, then calculated how many colonies would be expected in a given space if they really were growing randomly. It turned out that most areas had noticeably more or fewer corals than this average, indicating they were crowded into clusters.

The researchers also used computer models to arrange the corals, and found that clustered patterns best matched how corals actually dotted the reef.

The most densely-populated areas could be seen with the naked eye. But other clusters were harder to discern. “It looks like a shotgun blast against a wall,” Edwards says. However, only a few species grew in no apparent pattern, and none were sprinkled evenly over the reef.

Clusters seem to be dictated by the ways in which different corals grow and reproduce, Edwards says. The species that clustered most tightly tended to be ones that break apart easily, like staghorn coral. When a chunk is dislodged, it can fall nearby and spawn a new colony. Other corals release their offspring into the water to float around before settling down. These species tended to grow in looser clusters that may depend on where they find available habitat.

A cluster may also form if a storm or bleaching event kills some of the tiny animals called polyps that make up a coral. Any surviving patches of tissue will begin to grow afresh, creating a constellation of new colonies where a single coral once stood.

Corals likely enjoy a few perks from living near each other. Being tucked within a cluster may provide shelter from predators. And the more corals occupy a patch of land, the better they can break up oncoming waves. This means each coral is less likely to be dislodged during a storm. A cluster can also disrupt seawater as it flows over the reef so it swirls around and better distributes nutrients among the colony. More neighbors means more potential mates, too. “You want to be close together so you give your babies the best chance of being fertilized,” Edwards says.

After a storm or other trauma, corals might be more likely to thrive if conservationists re-plant them in clusters rather than spacing them evenly over the reef. The species used in coral restoration efforts tend to be ones that crumble easily; should the pieces land on another coral, they can fasten onto it and start re-growing. But if a coral is without neighbors, those fragments drift to ground. “It’s going to be a lot harder for it to find a good spot to reattach,” Edwards says.

In future, the team will track how successful coral clusters are over time. They hope to identify patterns that signal a healthy reef so researchers can mimic them when rehabilitating coral reefs and planning marine protected areas.

“Corals are kind of the trees of the underwater world,” says Edwards, who reported the findings October 12 in the journal Coral Reefs. “They create these underwater forests and they’re stuck in place. So space for a coral is everything. Where it is on the landscape is everything.”