More skunks can do handstands than we thought

Three new species join the “acrobats of the skunk world.” 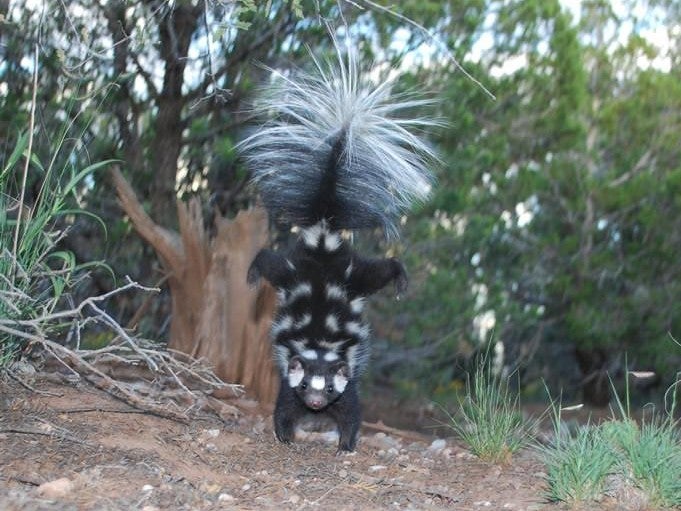 A group of enigmatic little skunks have a characteristic move: Seconds before they spray, the animals flip into a handstand, and spew their noxious chemical compounds while upside down. Known as spotted skunks, these animals have always been a bit of an enigma to researchers, and now a team of scientists has identified three new species that belong to this distinctive group of skunks.

Scientists analyzed the DNA of spotted skunks collected from across North America, and found that several populations previously considered subspecies were in fact distinct enough to deserve a promotion. The findings have implications for efforts to conserve the rarer members of the group, the researchers reported on September 1 in Molecular Phylogenetics and Evolution.

“There are a lot of places where spotted skunks are not doing particularly well at all,” says Samantha Wisely, a wildlife ecologist at the University of Florida in Gainesville who was not involved in the research. “They’re these incredibly cryptic and very shy species, and so we just don’t know a lot about them and that makes them really hard to conserve.” Now, she says, this new paper provides evidence that there are far more distinct species of this animal than we realized.

Spotted skunks are smaller than the striped skunks that many people are more familiar with, and covered in white patches that are actually broken-up stripes, says Adam Ferguson, a collection manager of mammals at the Field Museum in Chicago and coauthor of the paper. “They are everybody’s favorite; they are adorable,” he says. “I call them the acrobats of the skunk world because they’re really good climbers [and] they can do the handstand.”

Scientists have debated just how many spotted skunk species roam the continent for over a century, with estimates ranging from two to 14. In recent years, four species have been recognized: respectively, the western, eastern, southern, and pygmy spotted skunk. They differ in appearance primarily by size and the pattern of their white markings, Ferguson says.

He and his colleagues thought that a more thorough look at the genetics of spotted skunks might reveal some additional members hiding within the four known species. Gathering enough skunks to analyze proved to be a challenge, though. This was partly because the agile skunks can be difficult to find and catch, and partly because of their protective stench.

“Collecting and saving them from roadkill is not what everyone likes to do,” Ferguson acknowledges. “When we found them [dead] on the road, we actually had to bag them and then hang [the bags] out the trunk…because if you put it in your car, your car is going to smell like that for the rest of the time you own the car.”

Ultimately he and his team compiled 203 tissue samples from both recently collected skunks and older museum specimens, along with samples from several other kinds of skunks for the sake of comparison.

The researchers next examined the skunks’ DNA. First, they looked at the nucleus, the part of the cell containing the majority of genetic material. They also analyzed the mitochondria, which are the energy-producing cellular structures that contain their own circular DNA. Analyzing both types of DNA allowed the researchers to build a more complete picture of the skunks’ evolutionary history, Ferguson says.

He and his colleagues found that there were actually seven different species of spotted skunks. They determined that the pygmy spotted skunk split off from the common ancestor of the rest of the group about five million years ago.

Then, around 1.5 million years ago, this ancestor split into western and eastern populations, which each eventually gave rise to three different species. These splits were likely driven by the expansion and retreat of glaciers—whose icy bulk acted as a barrier to isolate spotted skunk populations from each other—during the Pleistocene Ice Age.

The prairie spotted skunk has declined significantly across the Great Plains in recent years. Recognizing this population as a full species could help it gain protections under the Endangered Species Act. “This is a much older, more distinct evolutionary lineage, which implies that it warrants conservation,” Ferguson says.

The findings may also shed light on a phenomena seen in some spotted skunk populations known as delayed implantation, which allows the animals to mate in fall and then wait to give birth until the spring.

“They can hold onto a very, very early stage embryo and delay the implantation of it [in the uterus] to really delay pregnancy until it’s a much better time to actually have a baby and raise it,” Wisely says. Understanding how and why spotted skunks diverged into new species can “help us understand what are some of the evolutionary triggers to facilitate this…process.”

There may still be more spotted skunk species waiting to be identified, Ferguson says. In the future, he and his colleagues hope to get their hands on more skunks from the southwestern United States, Mexico’s Gulf Coast, and across Central America. He’s particularly interested in the tropical forests of the southern Yucatán Peninsula.

Skunks can be found across North America, Ferguson says, but “we still don’t know everything there is to know about them…it’s worth continuing to dig deeper in our own backyards as well as other places to figure those things out.”