Coral reefs might be in more trouble than we thought

A giant die-off suggests our predictions are overly-optimistic 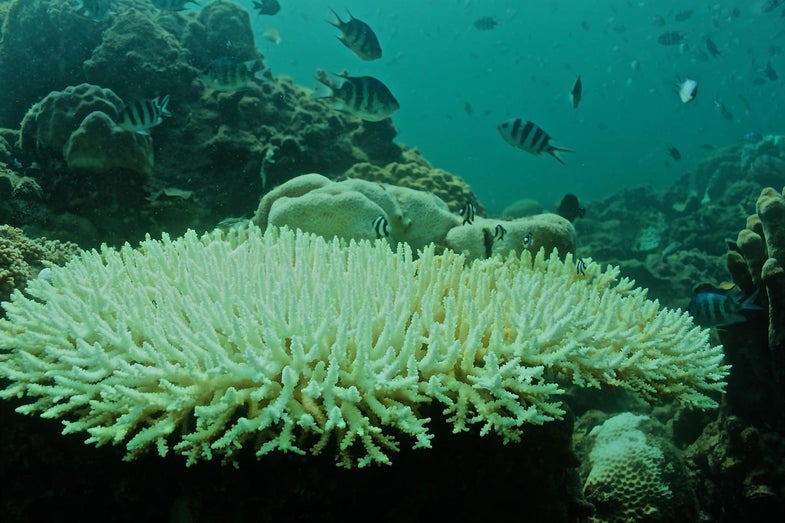 Warning: coral reefs might be a lot more sensitive to global warming than originally predicted.

As a result of moderate ocean warming amplified by local weather conditions, forty percent of corals in a remote circular reef in the South China Sea died, according to a new study in Scientific Reports. By analyzing the bleaching history from the cores of living corals, researchers also concluded that the event is the most severe and massive of its kind in the past 40 years.

In June 2015, the winds were unusually calm in the South China Sea. In response to a Pacific El Niño, the open ocean around the Dongsha Atoll reef was about two degrees warmer than normal. But the water right above the reef was even hotter: without the monsoon winds that usually move the water around to keep the reef the same temperature as the surrounding open ocean, it had another four-degree increase on top of the two-degree anomaly.

“There’s essentially a giant swimming pool on this really shallow reef that just bakes in the sun,” says Tom DeCarlo, coauthor of the paper. DeCarlo is currently a research fellow at the University of Western Australia, but did the study during his PhD program at the Woods Hole Oceanographic Institution.

“So what we saw is that because this heating event was so extreme on the local scale on the reef, it killed almost half of the corals within just a few weeks,” says DeCarlo. That’s quite quick compared to your average coral bleaching event.

The finding fits well in the big picture of corals being threatened by global warming. But what this study showed is that “coral reefs don’t behave like the open ocean,” says co-author Anne Cohen, a professor at Woods Hole.

“[A] relatively small change in the temperature of the open ocean can translate under certain conditions to a big warming on the reef, much more than you’d expect from just open ocean warming,” Cohen says.

But the projections of how coral reefs will fare over the next century are based on data of the open ocean, says DeCarlo. “When you superimpose or add these local effects on top of the global warming trend… it’s crossing over the threshold that the corals can take,” says DeCarlo.

DeCarlo adds that people have not yet incorporated local conditions into the global climate model in an organized way. “You can actually calculate the temperatures of the coral reefs very well in a very small local scale,” says DeCarlo. “Someone’s doing this on Dongsha Atoll,” says DeCarlo, building models based on how the water flows around the atoll and the energy that comes from the sun.

“It is possible to put this local model into a larger-scale climate model,” says DeCarlo. “You wouldn’t be able to say in June of 2030 there’s going to be a bleaching event. You could say based on what we expect the large-scale climate to do, there’s maybe certain probability of there being bleaching events on this reef, depending on weather patterns.”

Global warming jeopardizes coral reef ecosystems worldwide. As temperature increases, corals expel the symbiotic algae that live inside their cells. Once the corals lose the algae that normally photosynthesize and provide energy to them, they become bleached, starved, and eventually die.

Scientists have some idea of how high the temperature has to be in order to cause corals to die on a large scale. “The Paris Climate Treaty talked about bleaching temperatures well below 2 degrees Celsius increase, and the aspirational goal, in the long run, is keeping them below 1.5,” says Mark Eakin, coordinator of NOAA’s Coral Reef Watch.

“This study is helpful in ensuring what can happen, because if you allow 1.5 or 2 degrees of warming to occur then you can have localized condition [that] dramatically increase the stress on corals and have severe bleaching and mortality,” says Eakin.

In their study on the Dongsha Atoll, coral species showed different bleaching and mortality responses to the extreme rise of temperature. “We saw everything bleached,” says DeCarlo, but after six weeks some species recovered while others didn’t. “That’s actually pretty typical. There’s a branching coral that’s called Acropora that grows really fast. You’ll often see pictures of them. They form really big thickets and the heaviest branches,” DeCarlo explains. “They were hit the hardest. They had the highest mortality.” There’s also the Porites corals, which are “more boulder-shaped, just massive corals,” says DeCarlo. They bleached but they didn’t die.

In the future, Cohen hopes to find coral reefs that have a better chance of surviving. “If we can find reefs that are very tolerant to warming then we can work with the government to try to protect those reefs from other activities that can harm them,” she says.

Coral reefs need all the help they can get. “There’s a global bleaching event that’s been going on since June of 2014. It has been going on now for 33 months, and it is still ongoing,” says Eakin of NOAA’s Coral Reef Watch. “And there’s severe bleaching occurring in the Great Barrier Reefs. This is a problem affecting a lot of areas all around the world.”