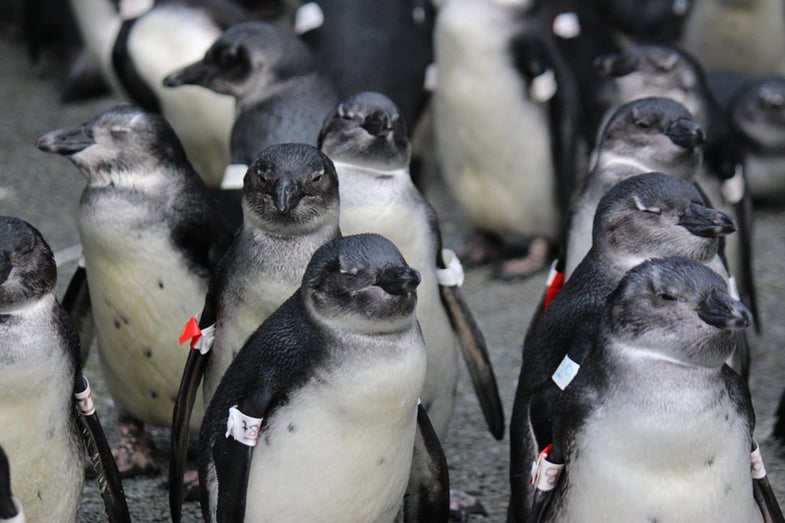 The sight of beetles, moths and other aerial insects buzzing around a streetlight is a hallmark of modern life. It’s also what you might call an ecological or evolutionary trap.

The light attracts the insects by mimicking the way moonlight reflects on the slips, puddles, and pools of water that they depend upon to survive. The human introduction of artificial light turns a visual cue that says “this is a good place to grab a drink or lay eggs” into a sneaky death trap. A new study in Current Biology suggests that endangered penguins are getting caught in a similar web.

The study led by Richard Shirley, an ecologist and conservation biologist with the University of Exeter, looks at juvenile penguins from eight colonies across three breeding regions. One breeding region is in Namibia and two are in South Africa, in the country’s Western Cape and Eastern Cape provinces. Researchers tracked the birds at the age when they strike out on their own, a period that isn’t always given a lot of scientific attention.

“A lot of conservation efforts focus on breeding sites,” said Lauren Culler, an ecologist at Dartmouth University’s Institute of Arctic Studies who was not part of the study. But when a population is in trouble, it’s important to know what the teens are up to.

Shirley and his team attached Platform Terminal Transmitters (PTT) to 43 juvenile African penguins. The PTTs send data to satellites on a regular basis, allowing researchers to track movements over time. The researchers combined the tracking data with spatial data on water temperature and vegetation and known penguin behavior. In doing so, the researchers were able to spot an ecological trap.

Juvenile African penguins travel thousands of miles searching for waters with cooler surface temperatures—and that are rich in chlorophyll a, which is prevalent in the phytoplankton that small fish, such as sardines, depend on. Since juvenile African penguins depend on sardines, they seek out habitats that sardines prefer. They do so without adult guidance—the grown-ups stay behind— which suggests this is an evolutionarily adapted behavior and not a learned one.

It’s a trait that ordinarily helps them stay fed. But like our street lamps trick flying insects, the changes brought about by climate change and overfishing have young penguins dealing with mixed signals. Even in spots where the water is cool and there are signs of bountiful phytoplankton, fish are often hard to come by. Overfishing in particular has left behind only less nutritive species like jellyfish. And therein lies the trap.

In human terms, it’s like seeing a road sign for an all you can eat buffet, only to pull over and discover nothing but a patch of grass.

The researchers found that as many as 50 percent of the juvenile African penguins who arrive at these denuded food sites perish. Over time this will impact their ability to survive at a species level.

“It’s yet another example of how we don’t fully understand the extent of human impacts on ecosystems,” said Culler.