Hunters may need to keep their paws off Wisconsin wolves

Poaching may be a bigger threat than the state thought 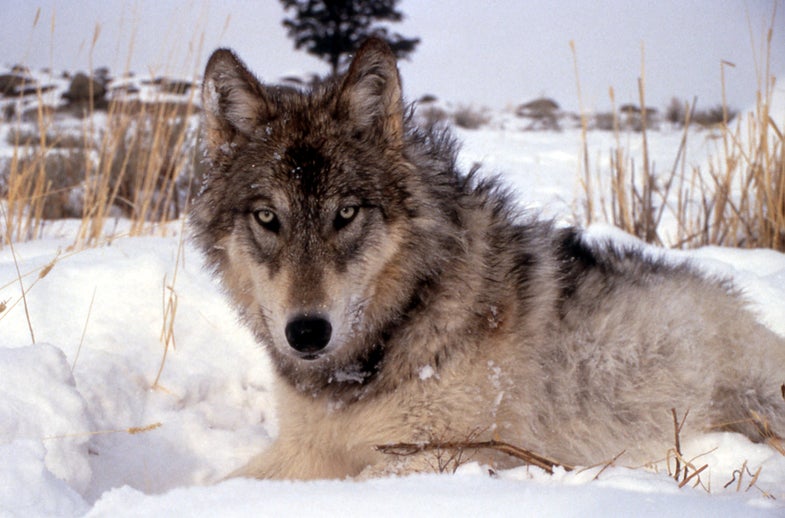 Wisconsin’s wolves are a great success story in many ways. When the state began monitoring its gray wolf population in 1979, there were only about 25 left in the area, after bounty hunting and prey decline nearly wiped them out. Today, thanks to the Endangered Species Act and the state’s efforts, Wisconsin is home to about 800 gray wolves. But they may not be out of hot water yet.

In 2012, Wisconsin declared its wolves were no longer endangered, and over the course of three years, hunters obtained permits to kill more than 500 of them. A federal judge put the population back on the endangered list in 2014, where it remains today. But there are folks in Wisconsin—including the governor and some senators and congressmen—who hope the wolves will be fair game again soon.

That might not be such a good idea, according to research published Monday in the Journal of Mammology. The study found that Wisconsin’s Department of Natural Resources (WDNR) has systematically underestimated how many wolves are killed by poachers each year. And without an accurate estimate of the population size and the threats they face, hunting quotas could potentially imperil Wisconsin’s wolf populations again.

“We’ve found that poaching or illegal killing is the primary threat to wolves in Wisconsin,” says lead author Adrian Treves, who studies human-carnivore interactions at the University of Wisconsin-Madison. “This isn’t something that only happens in Africa. It’s happening in our own backyard, with controversial species like the wolf.”

Treves and his colleagues received a grant from the WDNR to study how the state’s 2012-2014 cullings impacted the wolves’ population growth rate. In the course of that study, the researchers tracked down the state’s data on how wolves die every year. The state sorts cause of death into five basic categories: vehicle collisions, legal killing, poaching/illegal killing, and non-human causes. After digging through the state’s figures, the researchers found problems with how the data were collected and analyzed.

The discrepancy between poaching’s estimated and actual impact was particularly profound: Treves’ team found poaching to be the cause of at least 39 to 45 percent of wolf deaths every year, compared to the state’s estimate of 34 percent. And Treves says that 45 percent is based on conservative estimates—the real number may actually be higher.

“The care that should have been taken was not taken,” says Treves. “We don’t think somebody was intentionally underreporting poaching, but it seems like the state agency errs on the side of not calling something poaching.”

Treves and his colleagues found a number of problems with the way the state estimated the cause of death in wolves.

Since it would be impossible to monitor every wolf in Wisconsin, the state radiocollars only about 13 percent of its wolves. By monitoring those wolves, they try to get an idea of how the entire population is doing. But Treves argues that the wolves that are studied don’t provide an accurate picture of the larger group. That’s because they’re mostly selected from state lands, which represent the best and safest habitat for wolves. The wolves that live outside those core areas are at a higher risk of being poached or struck by cars, says Treves, and they’re not represented in the data.

There’s another problem. The state assumes that lost radiocollared animals have died of the same distribution of causes as they animals they’ve managed to keep tabs on. So if 34 percent of the successfully tracked population dies from poaching, the state assumes 34 percent of the collared wolves who went missing also died from poaching. But that’s not quite right, says Treves. Legal hunting claimed the lives of about 13 percent of tracked wolves, but since the state records each and every wolf that’s killed legally, none of the missing wolves could have met such a fate. So that 13 percent needs to be redistributed elsewhere, suggesting that the number of poached wolves would in fact be higher than 34 percent. And since poachers may be more likely to target a wolf that’s not wearing a radiocollar, the applicability of those numbers to the larger population is debatable.

Finally, Treves’ team revisited the files of a few dozen wolves that were autopsied, and found that many of the wolves classified as dying from car collisions contained bullet remains. “It looks to us like people might be shooting at wolves on the road and then hitting them with their cars as a weapon,” says Treves. He says that although the veterinarians reported the bullet evidence, “the state made a decision about the cause of death, and we think they got it wrong.”

Overall, poaching may be at least 6 to 11 percent more common than expected. Treves worries that if Wisconsin regains the power to hunt its wolves, and if it continues to underestimate poaching rates, it could put the population into a downward spiral.

“Without estimates of mortality and births that are unbiased, precise, and accurate,” the paper notes, “policies that promote the killing of wildlife will risk unsustainable mortality and raise the probability of a population crash. The current government of the state of Wisconsin risked that crash when it issued high wolf-hunting quotas and when it liberalized culling from 2012 to 2014, both done without presenting careful, transparent accounting of mortality and births.”

The WDNR did not respond to Popular Science‘s request for comment, but state leaders claim the wolf population never dipped below 350, the state’s minimum target. However, some researchers think 1,000 to 1,500 wolves might be necessary to maintain healthy genetic diversity.

Treves’ paper is surely not the end of the debate about whether to legalize the hunting of gray wolves. But the team is putting all the data online, so that other researchers can analyze their findings.

“The state has never published all of its mortality data,” says Treves. “We’re doing it for the first time to be totally transparent.”