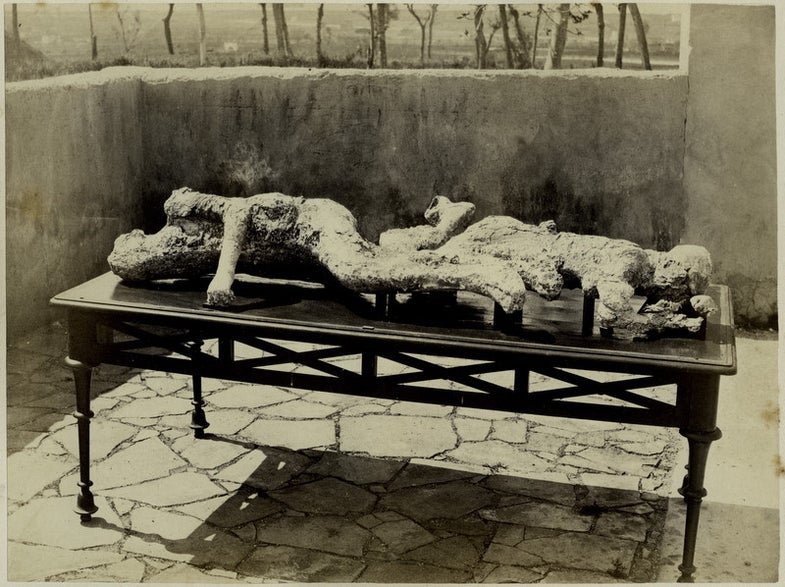 For nearly two millennia, the eruption of Mount Vesuvius has served as a stark reminder that nature is capable of some serious violence. The helpless residents of Pompeii and Herculaneum were inundated by volcanic horror, bludgeoned by hot ash avalanches that asphyxiated them while preserving their bodies for centuries afterward, within an unforgettable necropolis. At least, that’s what we always assumed. It turns out, many people probably died in ways that were more grisly than we imagined.

In findings published in PLOS One late last month, researchers from Naples, Italy found that a segment of Vesuvius victims were likely killed by fast-moving laving surges that streamed down toward the towns below, creating temperatures high enough to vaporize bodily fluids and create explosions in the skull. It’s about as horrific a way to go as you might imagine, and upends the notion that the toxic gases and thick chunks of ash were responsible for choking inhabitants to death during the AD 79 eruption.

“These kind of field and laboratory studies are of great importance, not only from the point of view of a historical and biological reconstruction of the Roman age populations, but also because they provide fundamental information useful for the assessment of volcanic risk in densely populated areas,” says Pier Paolo Petrone, a scientist from the Federico II University Hospital in Naples, Italy and the lead author of the new study.

For over two days, the eruption of Vesuvius was sheer cataclysm for nearby residents. It was 100,000 more powerful than both atomic bombs dropped on Japan at the end of World War II. The event began with a blanket of ash hitting the towns below, followed by streams of pyroclastic surge (molten gas and rock).

The new study hinges on analysis of more than 100 skeletal remains from about 300 eruption victims who tried to dodge the worst of the volcano by hiding in boathouses by the waterfront of Herculaneum, 11 miles from Pompeii. These people, unfortunately, found themselves overwhelmed by a massive wave of pyroclastic surge, which radiated temperatures between 400 and 900 degrees Fahrenheit and swept through the scene at nearly 180 miles per hour.

But it’s not the pyroclastic surge itself that did the Vesuvians in—the high temperatures caused their blood to boil. Petrone and his colleagues noticed red and black residues on some of the bones that had no obvious explanation. Spectroscopic analysis revealed they were actually high concentrations of iron, created by boiled fluids like blood. The steam coming off this reaction was enough to put undue pressure on soft tissues and bone, and even caused enough force to burst skulls open. The photos of those remains depict fractures in the skull where pieces just exploded off the surface, consistent with such an injury.

It looks gruesome, but at least we know the victims’ deaths were quick. The positions of the remains suggest there was a relatively short window of time where anyone suffered or had time to react with self-protective action.

This is far from the first time scientists have looked at alternative explanations for how people may have died during the AD 79 eruption. Giuseppe Mastrolorenzo, a volcanologist at the National Institute of Geophysics and Volcanology in Rome who was not involved with the study, emphasizes that the “heat” hypothesis had its first great big pitch in a 2001 paper published in Nature, which both he Petrone worked on. A subsequent study in 2010, which the pair also worked on together, showed evidence that extreme temperatures from pyroclastic surge may have also killed Pompeii residents in a matter of moments, through heat shock.

According to Petrone, while Pompeii and Herculaneum experienced the same sort of hot pyroclastic surges, “the post-mortem consequences on the bodies of victims were different in these towns due to their distances from Vesuvius.” Herculaneum was closer, allowing the heat to instantly vaporize bodily tissues and fluids, while the heat reaching the more-distant Pompeii would have been sufficient to kill, but not necessarily vaporize flesh and blood.

While he finds this research important, Mastrolorenzo does raise some questions about the analytical rigor from the latest PLOS One paper, noting that the evidence of vaporized blood is “not a definitive demonstration that the victims were exposed to high temperatures.” The cause of death may have been something else entirely, and the observed high-temperature effects on the blood and tissue may have been produced by post-mortem pyroclastic flows. “Blood is just not the best indicator of this process,” he says. Mastrolorenzo also adds that even if the results hold up to scrutiny, they don’t outline the specific mechanisms by which high temperatures force the human body to seemingly freeze up before death, and this might be a useful direction for follow-up research.

Nevertheless, both researchers agree the study’s implications extend beyond just understanding more about the AD 79 eruption, and could be used to assess volcanic risk in areas like Metropolitan Naples and towns near Vesuvius, which are home to about 3 million people.

Mastrolorenzo is encouraged that people are starting to take seriously the threat behind pyroclastic surge. “We know the first cause of death is the high temperature—not mechanical impacts or asphyxia.” Yet, “when it comes to Naples, there is no evacuation plan for a Vesuvius eruption.” Although the volcano has been silent for 73 years, it’s still active, which means we could see activity brewing at any time—perhaps even something comparable to the AD 79 eruption. Despite disagreements about the best way to interpret the findings, Mastrolorenzo hopes that results like these can push civil officials, in Naples and elsewhere to rectify the “inadequate” procedures in place to respond to a fresh eruption. Boiling blood and exploding heads seem like problems that transcend politics, after all.