Resurrecting extinct animals might do more harm than good

But it depends on the species and the context 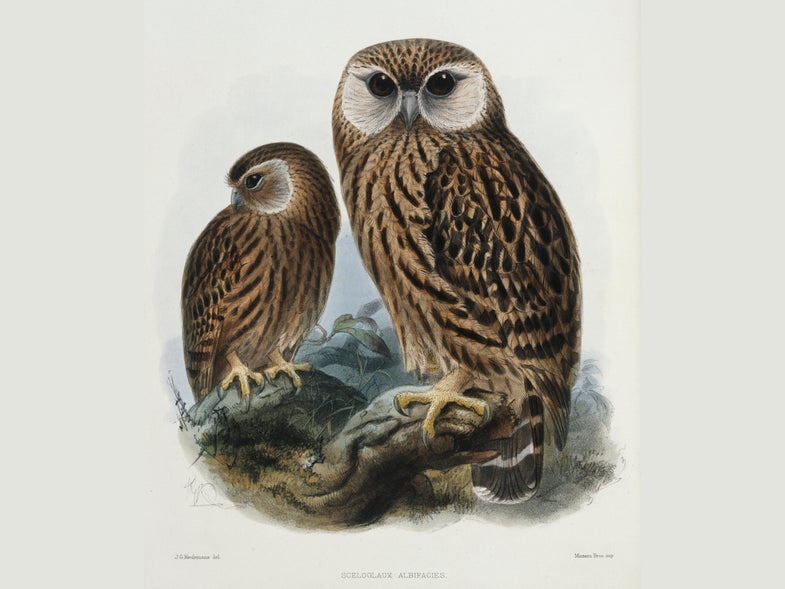 Land use changes and newly introduced predators such as cats and ferrets led to the demise ofNew Zealand's laughing owl, which went extinct by 1914. Genetic engineering techniques might be able to bring the species back from the dead—but should they?. National Library NZ on The Commons
SHARE

Scientists may soon be able to bring extinct species back from the dead. We won’t have woolly mammoths roaming around anytime soon, but the latest debates center not on whether we can resurrect species, but whether we should.

De-extinction would use genetic engineering to rebuild species that no longer exist. Advocates see it as a way to fix some of the damage that humans have wrought on the environment. But according to a paper published today in Nature Ecology and Evolution, that environmental justice could come at a dear cost to other species that need help. In fact, resurrecting extinct species could lead to a net loss of biodiversity.

“On one hand, we can bring back the dead and right past wrongs,” says study co-author Joseph Bennett, a conservation biologist at Carleton University in Canada. “On the other hand, there are many species going extinct every year, and our resources to help save them are severely limited.”

While de-extinction opponents have often cited small conservation budgets as an argument against resurrection, Bennett’s team managed to put a price tag on the rebirth of a few specific species.

The estimates didn’t include the cost of actually bringing the species back from the dead, because at this point, no one knows how much that will cost—probably tens of millions of dollars, says Bennett. His team’s analysis assumes universities and other private organizations would foot that bill.

But once a species is brought back from the dead, their populations will be small, and they’ll need the same types of protections that endangered species require. The cost of managing the new-old species would fall on either governments or private institutions. Bennett’s team analyzed how either of those scenarios would affect the conservation of species that already exist, and have never been extinct.

New Zealand and New South Wales happen to keep very detailed calculations on how much it will cost to conserve their threatened species, so Bennett and his team used those numbers to estimate the cost of managing similar, currently extinct creatures. For example, the rare Chatham Island warbler stood in as an analog for the extinct Chatham bellbird. Based on data from the warbler, the first year of conservation for the resurrected Chatham bellbird would cost $358,966 USD.

They made these estimates for 11 extinct New Zealand species, and 5 extinct species from New South Wales. And more often than not, resurrecting one extinct species led to the loss of many other species due to competition for financing. In the government funding scenario, there was one exception—the conservation of the extinct Forbes’ snipe would overlap with conservation efforts of 39 other species, resulting in a net biodiversity benefit.

The reason the (currently) extinct species would be more expensive to conserve is because their threats—habitat loss or predators, for example—were more difficult to mitigate.

“Maybe that’s why some of them went extinct,” says Bennett. “Another reason for their higher cost is that we considered captive breeding and re-introduction, which are not necessary for most existing species.”

So does this mean scientists should give up on the dream of bringing back the species that humankind has destroyed? Not necessarily.

De-extinction and conservation aren’t ‘one size fits all’

Ben Novak, an ecologist working to restore the extinct passenger pigeon, points out that the new study’s main assumption—that funding for conservation and de-extinction are mutually exclusive—doesn’t mesh with his experience with the fundraising efforts of Revive & Restore, a foundation that’s researching genetic tools to conserve endangered and extinct species.

“There are certain donors that are only interested in the biotechnology involved in de-extinction, and contrary there are certain donors that … instead chose to donate to extant endangered species after their introduction.” In addition, he says, “de-extinct proxies offer the potential to raise more money for conservation than many extant species”—for example, when they’re on display in zoos.

Novak also cautions against extending the predictions from New Zealand and New South Wales across the entire globe—the impact of de-extinction is going to vary from location to location and species to species. For example, says Novak, “Disproportionate spending on [the Giant Panda] is actually protecting a larger number of species in China than if the funds were distributed differently.”

Lastly, there are moral arguments for and against de-extinction that no study can quantify. In a commentary that accompanies the paper in Nature Ecology & Evolution, Ronald Sandler, an ethics professor at Northeastern University, notes that the most prominent arguments in favor of de-extinction aren’t focused on a cost-effective conservation strategy.

“They are instead based on restitutive justice, recreating lost values, and revising conservation paradigms,” he writes. “These ethical considerations are thought by those who raise them to establish a positive responsibility to engage in de-extinction.”

Bennett, for his part, says there are still compelling reasons to work on de-extinction—for one, it could lead to techniques that help to conserve existing species. For instance, while traditional breeding practices have to work with what they’ve got in terms of a species’ remaining genetic diversity, the genetic engineering techniques that de-extinction hopes to use might be capable of adding genetic diversity into a population very quickly.

“If indeed de-extinction is going to be used as conservation tool, then people need to have a very sober look about what those resources would actually do for existing species,” says Bennett. “We’re literally losing thousands of species a year. There is no shortage of choice as to where we could spend our conservation resources. So I think we need to be very careful about how we do that, to try to conserve as much biodiversity as we can.”