Some skyscrapers are so shiny they turn into death rays 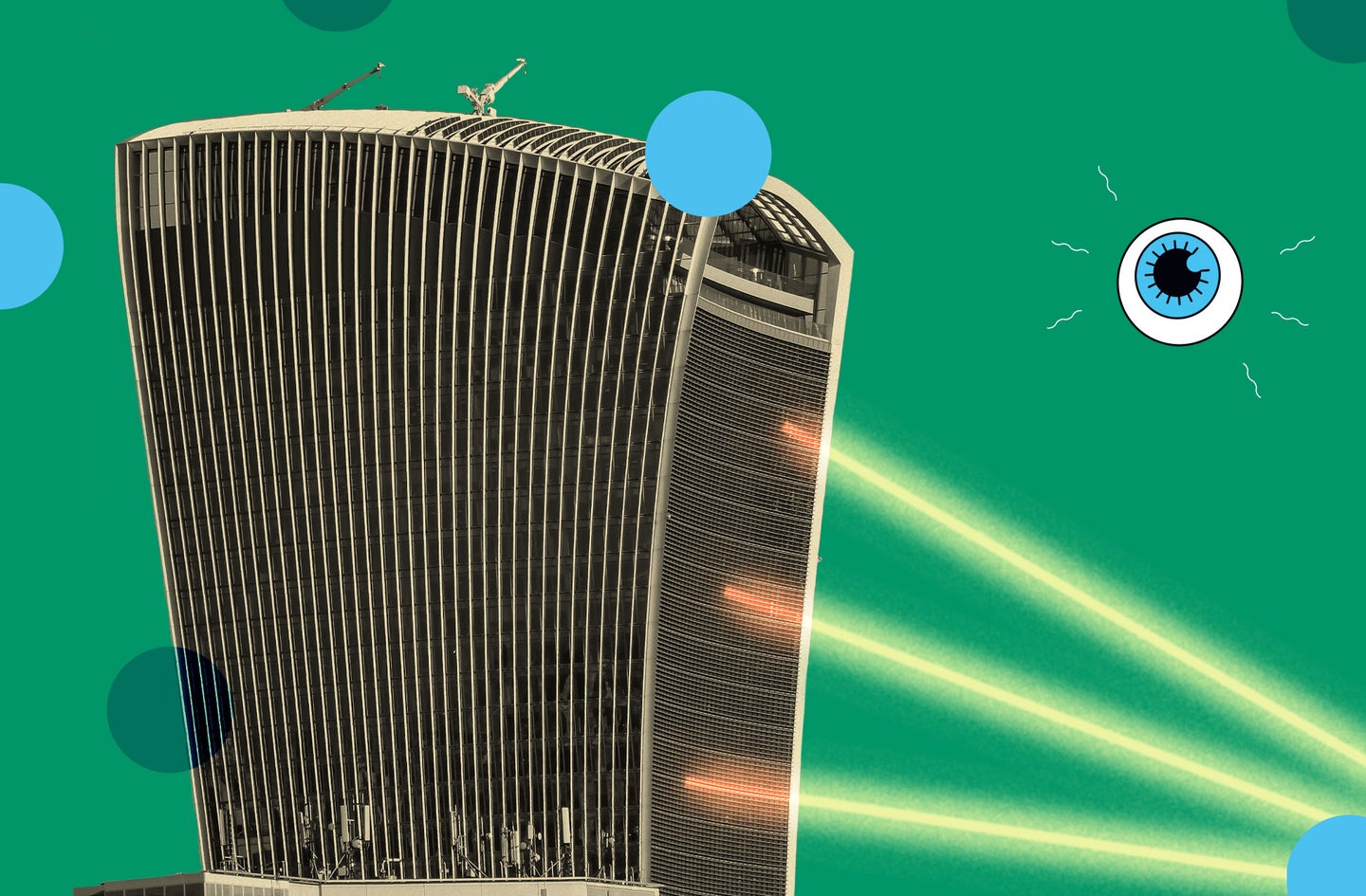 How the "Walkie Talkie" turned into the "Fryscraper.".
SHARE

This week’s episode is about all things hot—providing just a quick taste of the sorts of stories you’ll find in the latest issue of Popular Science. We’re now a digital-only magazine, which means you can access it right here and now.

FACT: Some skyscrapers are so shiny they turn into death rays

In 2013, a London skyscraper known as the “Walkie Talkie” building made its mark on its neighborhood in an unusual way: Sunlight bouncing off the topmost floors of the bulbous facade melted cars on the street below. At the peak of its shine, the ray emitted 15 times as much solar radiation as would usually be found on the ground—enough to hurt any humans unlucky enough to cross its path.

Strangely, though, this was not the first time the so-called Fryscraper’s architect had set a town alight; the Vdara hotel in Las Vegas had, only a few years earlier, reflected rays so powerful they singed guests’ hair on the pool deck below. This was such a persistent problem that the hotel installed an army of giant umbrellas to shield swimmers and sunbathers. The Walkie Talkie now has a shield in place to provide a similar fix.

Many other buildings dotted around the globe have spurred similarly scorching scenes. Computer-assisted models have since revealed just how dangerous these rays can be, spurring physicists to sound alarms about the reflectivity of our modern structures—and implore architects to design buildings that sweat the exterior temperature as much as the interior one.

FACT: The sun will not explode in the year 2057

Here’s some good news: We still have another five billion years before the sun runs out of hydrogen and sets us and our planetary neighbors on fire. That gives us a little more time than the sci-fi movie Sunshine predicted, and a couple of millennia to understand how stars truly meet their ends.

Astronomers have a pretty good guess at how the sun will burn out, based on the trajectories of yellow dwarves in other solar systems. But not all stars follow the same destiny. An energy analysis of distant galaxy NGC 6946 reveals that the red supergiant at its heart barely exploded as it completed its death spiral. Instead, it sort of just vanished and formed a gaping black hole, leaving its celestial neighbors intact.

Experts are wondering if the red supergiant Betelguese will go out the same way. The grizzled star was looking dim in the night sky last year, but recent findings hint that it may have been due to a dust cloud, not impending nuclear doom. Tracking its fate and modeling more stellar scenarios could give us more insight on how our—and existence as we know it—will end.

FACT: If you love hot tubs, thank the Jacuzzis

When I set out to learn the history of the hot tub, the first, like, five pages of google search results were all from companies that sell them, which is absolutely my least favorite genre of history article. But then I found this amazing Atlas Obscura article from 2015 by Rich Paulas. You’ll have to listen to this week’s episode of Weirdest Thing to get the full scoop on my deep dive into the history of hydrotherapy—from the Ancient Romans, to bougie old resorts, to literal torture devices, to a bygone vestige of swinger culture, and finally to the fancy wellness aids we know and love today. But if you don’t learn anything else, know this: Jacuzzi isn’t just a product name. It’s also a surname. And the Jacuzzi family had a pretty prolific run as inventors during the first half of the 20th century. The next time you find yourself luxuriating in a whirlpool, take a moment to say salute to the Italian brothers who made your soak possible.

Plus: Click here for tips and tricks on how to take the absolute best and most relaxing bath ever.