A total eclipse of the heart 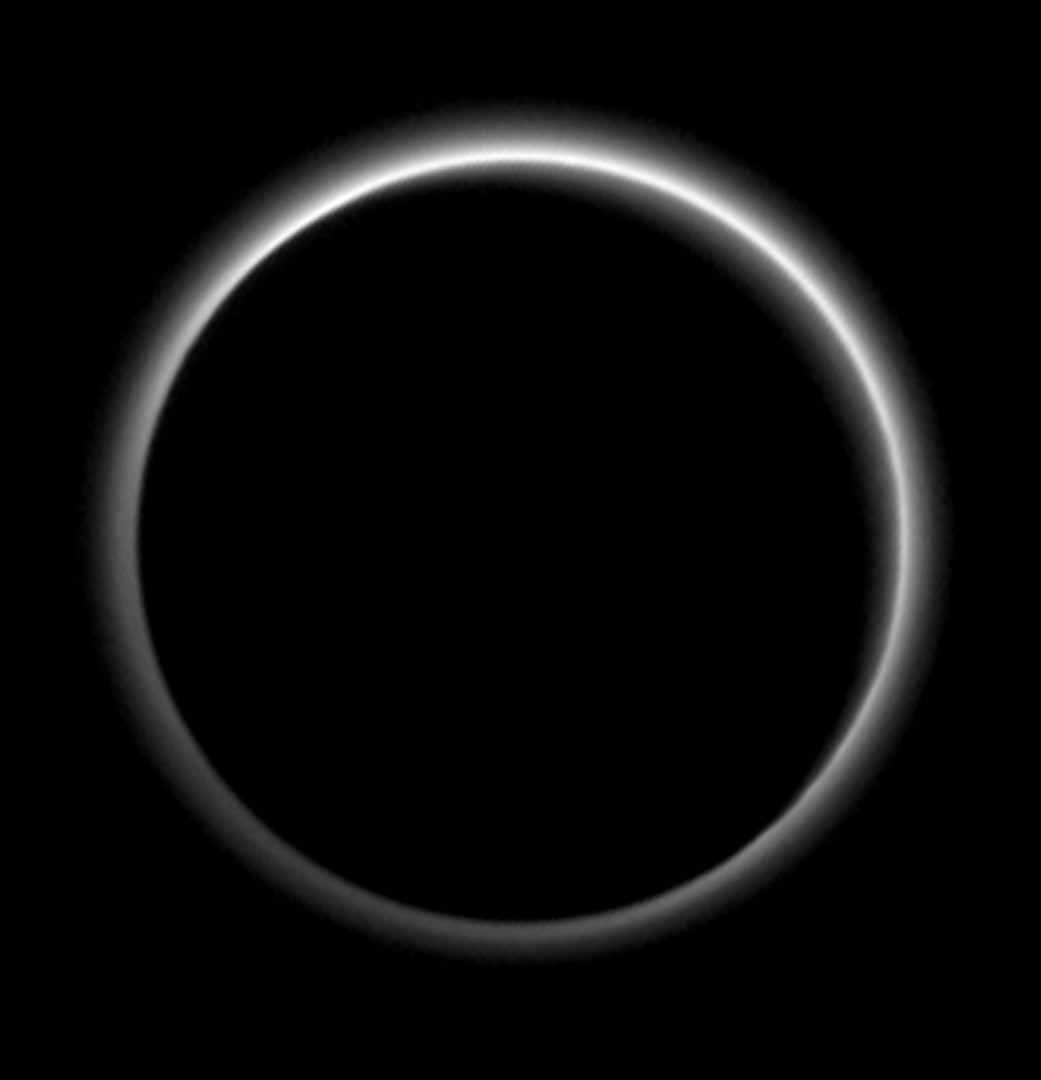 Beamed across billions of miles and a very narrow bandwidth, the latest images from the Pluto flyby were worth waiting for. One reveals the view from New Horizons after it sped past Pluto and looked back to study its atmosphere. “This is our equivalent on New Horizons of the Apollo 11 earthrise,” says New Horizons’ Alan Stern.

It is both beautiful and mysterious. Backlighting by the sun shows that Pluto’s atmosphere is about four times taller than scientists thought was possible. It has two distinct layers of haze–one at 30 miles above the surface, and another at 50 miles. The haze extends to about 80 miles out, whereas scientists previously thought that it could only extend to 20 miles.

From a NASA press release:

Another image suggests that ice sheets have scraped across Pluto’s “Sputnik Plains” sometime in recent history–within the last 10s of millions of years–and may still be doing so today. So far, evidence of this phenomenon has only ever been observed on Earth and Mars. “From what we know of the heat flow coming from interior, there’s no reason that this stuff cannot be going on today,” said New Horizons’ Bill McKinnon. 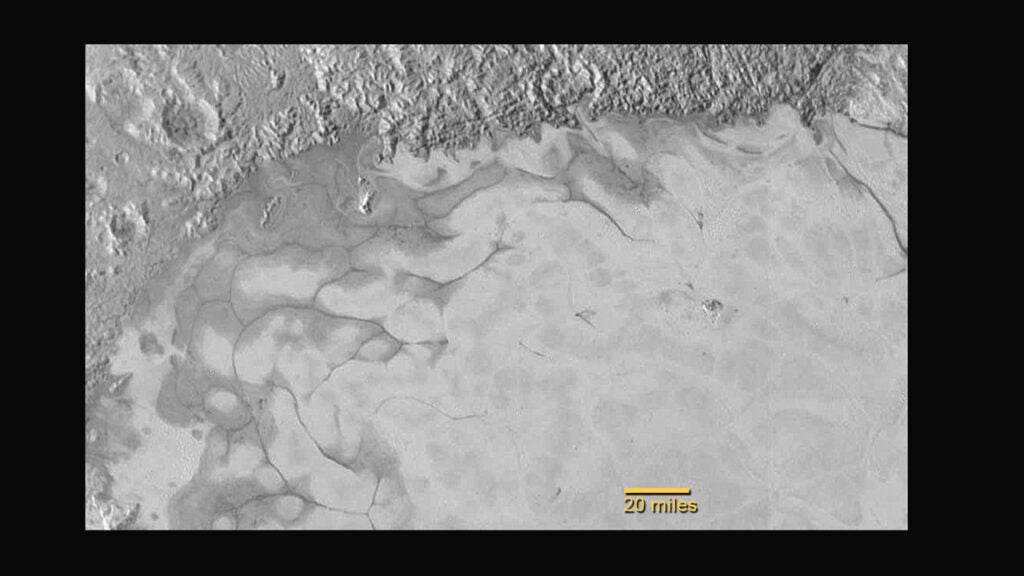 Images of Pluto’s surface captured by NASA’s New Horizons spacecraft reveal that a giant sheet of ice recently flowed — and could still be flowing now — in a plain in the western half of Pluto’s “heart,” also known as Tombaugh Regio.

The image shows an area that’s about 250 miles across. It shows evidence of deep and extensive erosion, while the top shows evidence of a viscous ice flow filling in a crater. “The plains seem to have moved and surrounded the mountains,” said McKinnon. “To see evidence of recent geological activity is a dream come true.” 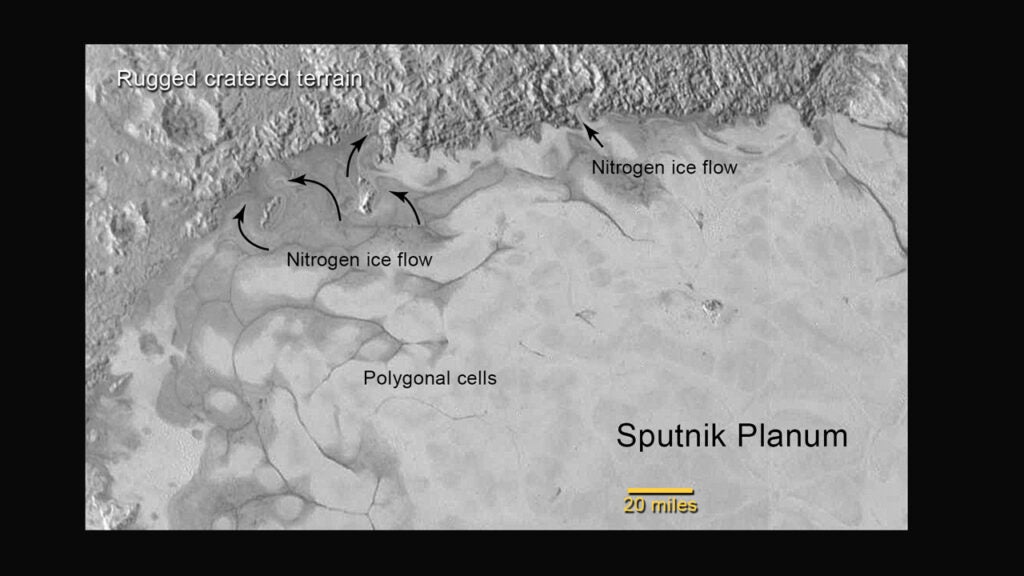 You can fly over Sputnik Planum in this NASA video:

Our map of Pluto is starting to get pretty detailed now: 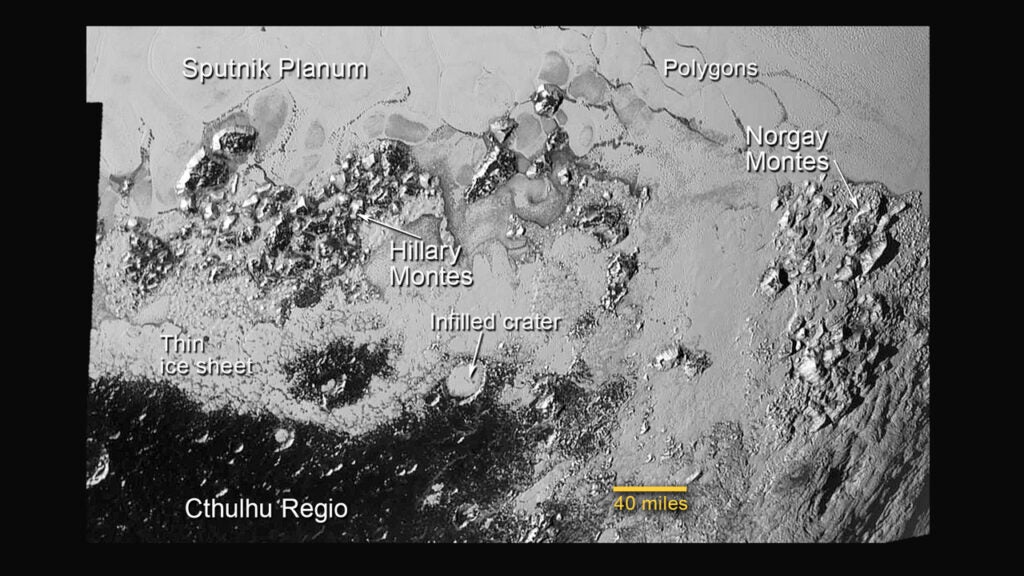 Among the many fun new names given to features of Pluto’s landscape that were revealed by NASA’s New Horizons spacecraft is an especially eye-popping one: Cthulhu, the name given to the dark, heavily-cratered region on Pluto’s southern hemisphere and a reference to the fictional ancient, squid-faced “Elder God” deity created by sci-fi writer H.P. Lovecraft.

And speaking of detail, remember that incredible image of Pluto’s heart that New Horizons sent back just before the flyby? Well, it just got even better. 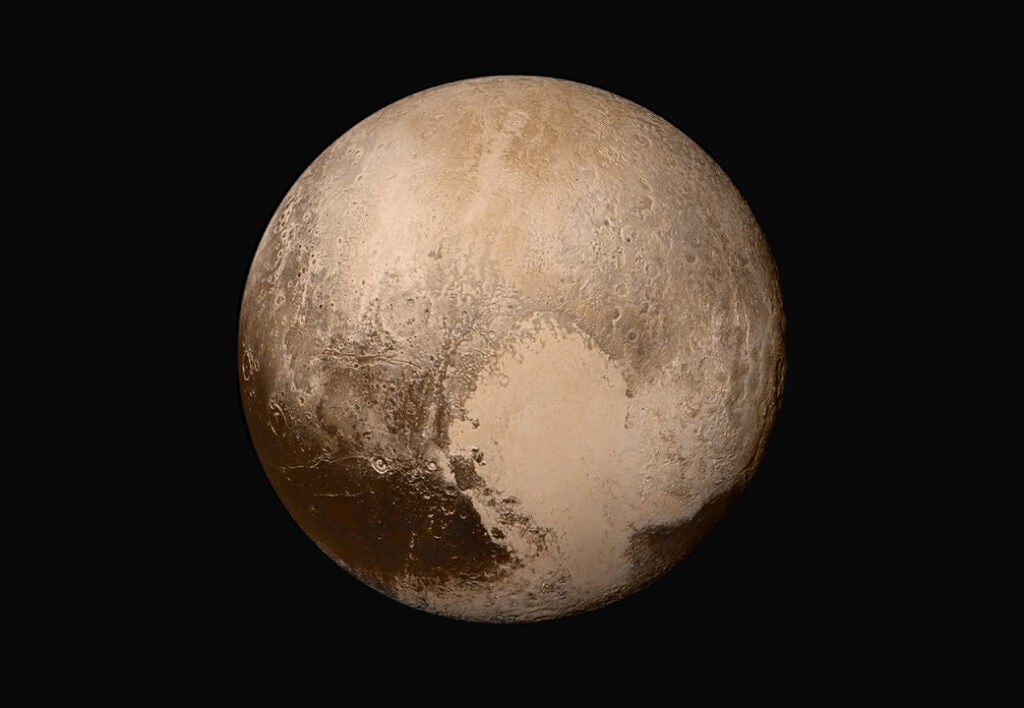 This is our best image of Pluto yet

A global mosaic of Pluto captured by NASA’s New Horizons spacecraft and released on July 24, 2015 reveals Pluto and its distinctive heart-shaped feature in more eye-popping detail than ever captured. The image was created by combining four separate captures from the Long Range Reconnaissance Imager (LORRI) with color data from the Ralph Instrument on New Horizons.
Pluto
Solar System
Space
New Horizons
planets