The nearby star didn’t explode. But it did the next best thing: everything else. 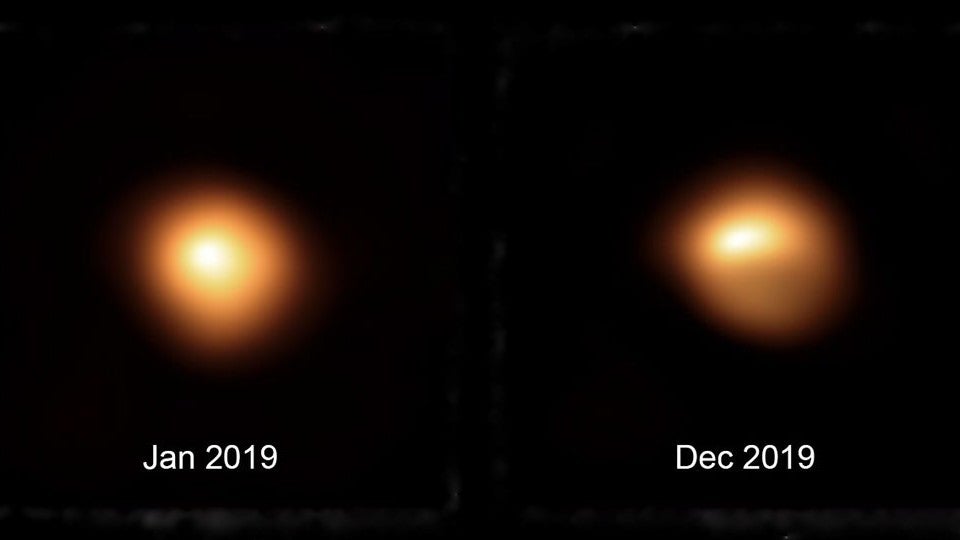 When buzz started to circulate among astronomers that the nearby red supergiant Betelgeuse was fading in November of 2019, astrophysicist Miguel Montargès doubted anything unusual was going on. After all, the star, which forms the beefy shoulder of the constellation Orion the Hunter, does have regular dimming cycles. But as Betelgeuse’s brightness plummeted, he couldn’t ignore the apparent anomaly. So he set out to prove that the standard cycles had aligned by chance, and sought out a team and instrument capable of zooming in on our friendly neighborhood red supergiant.

“My goal was to take an image with [Chile’s Very Large Telescope] to show that the star was as it is normally,” says Montargès, who currently works as an astronomer at the Observatory of Paris. “Of course, I was completely wrong.”

Meanwhile, rumors spread like wildfire. Was the elderly Betelgeuse’s sputtering a sign of an impending and spectacular supernova? Such exploding stars are a rare sight, observed just five times in our galaxy—and never at such close range. Astronomers didn’t think so, but they couldn’t deny that the red supergiant was up to something unusual. Its brightness eventually fell by roughly two-thirds before rebounding—an all-time low since the beginning of modern measurements. Even naked-eyed stargazers spotted the dimming.

Two years later, Betelgeuse remains in the night sky, whole and undiminished. So what really went down in that corner of Orion, hundreds of light years away? After conducting observations from one of the world’s most powerful telescopes— and painstaking theoretical work sifting through thousands of theories—Montargès and his team have figured out the most likely explanation. Their conclusions provide the best answer the astronomical community is likely to get for this head—er, shoulder-scratcher.

“This is the most comprehensive picture of what caused the ‘Great Dimming’ that we’ve seen,” said Emily Levesque, an astronomer at the University of Washington, who was not involved in the research. “It gives us a really nice, clear picture of what happened to Betelgeuse.”

As Betelgeuse faded before astronomers’ eyes, ideas abounded for what the culprit could be. Maybe something was simply obscuring the star. It had no known binary twin, so perhaps an interstellar dust cloud had drifted in front. Or some portion of the expansive dust cloud surrounding the aging star could have thickened up. Perhaps the star itself might have cooled.

To solve the puzzle, the team turned to one of Earth’s highest-powered zoom lenses: an instrument at the Very Large Telescope known as SPHERE (short for Spectro-Polarimetric High-contrast Exoplanet Research).

In most astronomical instruments, Betelgeuse shows up as a single-pixel speck surrounded by a billowing dust cloud. But with SPHERE, the researchers could zoom in far enough to see the star as the round object it really is. This up-close perspective let them observe not only the fact that Betelgeuse was dimming, but also where it was dimming.

Montargès and his colleagues used SPHERE to take a series of images, building on one snapshot he happened to take in 2019 before the fading began. The group followed up with another during the December dimming, and two more in January and March of 2020. Capturing the complete sequence came as a stroke of luck. The first image was taken on the second of a two-night observation window, after clouds had scuttled their first attempt. “It was really a miracle that we got the [pre-dimming] image in the end,” says Emily Cannon, a coauthor from the Catholic University of Leuven in Belgium.

Perhaps equally miraculous, the team got the final image on VLT’s last day of observations before the pandemic shut it down

The hard-won snapshots told a clear story: Betelgeuse’s bottom half had dimmed and stayed dark throughout the episode, ruling out a quickly passing interstellar interloper.

In the months following the event, two leading hypotheses emerged, both supported by different observations. The first was that a nearby patch of dust, part of the star’s natural veil, seemed to have obscured its bright surface. The second, a cool spot also seemed to have formed. Montargès and his team considered thousands of models for different ways the dust and cold spot could have played out, about 14,000 in all, searching for the theory that best matched SPHERE’s images. They eventually concluded that the two effects had worked together to darken the star.

Here’s what they think happened. About a year before the Great Dimming, Betelgeuse let out a giant belch of gas, releasing a cloud of hydrogen and other atoms. Then, by chance, a giant swath of the stellar surface cooled down. Convection roils all stars, as hotter material rises and forms quickly cooling bubbles on the surface—a popcorn-like phenomenon astronomers recently observed on our own sun.

[Related: These close-up photos of the sun could help us forecast space weather]

In a puffy red supergiant like Betelgeuse, these cells can cover up to a quarter of the star’s surface, sending a chill out into space. The cold snap gave the gas cloud a chance to settle down and combine into gritty molecules of dust. That sooty cloud then blocked the star’s light from reaching Earth. The group detailed their findings on June 16 in Nature.

“People had proposed pieces of this, and this Nature paper does an amazing job of putting them all together,” says Levesque, who wrote an accompanying analysis.

A nearby stellar testbed

While Betelgeuse isn’t ready to school modern astronomers in the finer details of supernovae just yet, the Great Dimming incident is helping them understand the final act of stars at least eight times the mass of our sun.

“Betelgeuse gave us this amazing nearby testbed for studying red supergiants that hopefully we can now turn around and apply to these stars as a whole,” Levesque says.

Theorists have known that cool patches and gassy burps are likely to be common, but getting a close look at how these behaviors interact can clarify how stellar winds launch from star surfaces.

Stellar winds are responsible for spreading the heavy atoms that form planets and people throughout the cosmos, as well for determining whether these heavy stars will have enough heft left over at the end of their lives to collapse into a black hole (Betelgeuse will likely end up as a neutron star, but it’s on the cusp of blackhole-dom).

Betelguese sits much closer to Earth than other red supergiants, so astronomers can see just clearly enough to really figure out what’s happening when it acts up. In fact, the nearby star shines so brightly, its fiery rays can easily damage delicate astronomical equipment “Your biggest fear with Betelgeuse is that you’ll actually burn the detector,” Cannon says.

The dramatic explosion many hoped for is still coming, but exactly when is anyone’s guess. It could arrive any day in the next 100,000 years or so. Montargès, for his part, feels sentimental about Betelgeuse, the first star he learned to identify by name as a child. He looks forward to studying the red supergiant for the rest of his career.“