We may spend out days basking it its life-enabling glow, but there’s a lot we don’t know about our sun... 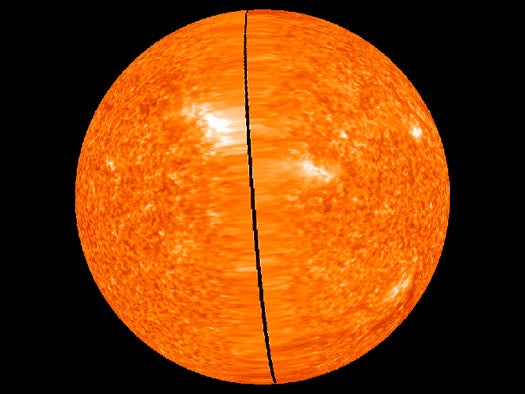 We may spend out days basking it its life-enabling glow, but there’s a lot we don’t know about our sun and how it impacts our planet. So NASA’s Solar TErrestrial RElations Observatory (STEREO) was launched to shed some light on the sun, and Sunday it beamed back its “first light” images—that is, the STEREO released its first 3-D images of the sun. Sort of.

STEREO launched in October 2006, placing two spacecraft into Earth’s orbit around the sun, with one gradually moving further ahead of the earth and one gradually falling further and further behind. On Sunday, the two spacecraft reached points in their orbits where they were nearly 180 degrees opposite each other on different sides of the sun (check the video below for a visual aid). Coupled with observations made from Earth and its orbiting observatories, astronomers can now see the entire sun simultaneously for the first time in human history.

The STEREO probes are now beaming back uninterrupted coverage of the sun’s far side, where solar activity was once hidden from view by the rotation of the sun, which rotates completely every 27 days or so. To mark the occasion, NASA released the above image, which is actually incomplete (as you can see from the narrow sliver of the sun not yet imaged) as it was taken before the probes were quite in position (in the video below, the completed view of the rotating sun uses simulations to fill in that gap). NASA will release completed far side images later this month.

Of course, still images of thr far side aren’t so groundbreaking. But the ability to actively observe the dynamic processes on the sun’s surface as it rotates could be a scientific boon, not to mention a better predictor of potentially dangerous solar events. Researchers can now identify solar activity on one side of the sun and follow it as it rotates, a capability that will provide them with with tons of new data on solar processes.

Coronal mass ejections (or CMEs) are those high-energy solar weather events that can actually have huge impacts here on earth. They occur when huge bubbles of gas threaded with electromagnetic field lines are ejected from the sun, disrupting the flow of solar wind and energy toward the earth, sometimes with catastrophic effects. Along with solar flares, they can disrupt electronics, power grids, and even aircraft on earth as well as navigation and communications satellites in orbit around it.

As such, STEREO is key to NASA’s proposed “Solar Shield” project and will hopefully provide an early warning for solar weather events as well as a trove of data for heliophysicists to draw from. It will also inform future efforts to study the sun, Kucera says, like whether or not it might be beneficial to place solar observatories at Lagrange points or what kinds of models best predict solar activity.