Can We Detect A Nuclear Weapon In Space?

Maybe, but they're still a bad idea 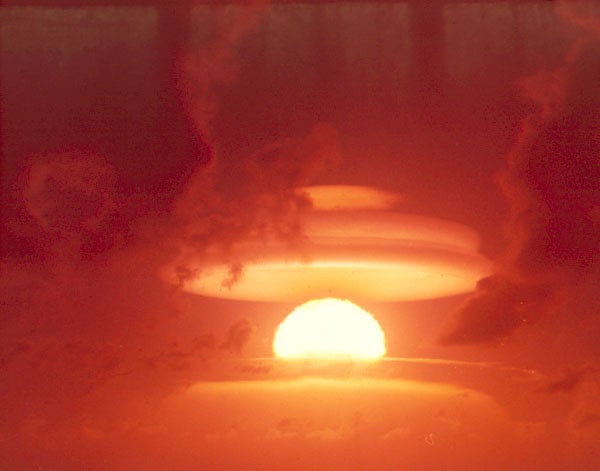 Last night on the Late Show, billionaire space entrepreneur and probable supervillain Elon Musk proposed nuking Mars as a way to terraform the planet. Creating an atmosphere on a planet with a magnetosphere is a challenge in and off itself, as are the questions of interplanetary nuclear war. Or testing. Which leads to a perplexing idea: Is it possible to detect a nuclear war in space?

Humans are already pretty good at identifying and tracking nuclear explosions on Earth. A network of seismographs, infrasound stations, and hydroacoustic monitoring can capture the aftereffects of a blast and pinpoint its location underground, in water, or in the air. Afterwards, radioactive particles can be matched to the blast. Developed during the Cold War, these sensors guarantee that any nuclear tests today are detected, very, very quickly.

Those sensors are limited to the boundaries of the Earth. To spy nuclear testing in the heavens, or on other worlds, we’d need something altogether different. For stars far away, we can make out something of the planets that orbit them through the way their light passes through various atmospheres on its way to Earth. That change in the light means it might be possible, if human astronomers are very prepared and very lucky, to catch a glimpse of a nuclear war on a distant world. Ross Andersen, writing in The Atlantic, says:

That helps us with nuclear wars far away (though the odds are so high against actually spying it that it doesn’t help us much, really), but what about much closer nuclear blasts, like on Mars? For that, we’ll just have to see if an electromagnetic pulse, the kind that follows an atomic weapon, kills Curiosity. If it does, may I suggest we check for any previously unknown silos in Musk’s backyard?

For what it’s worth, the U.S. Air Force Space Command is opposed to the idea.