This Could Be The Strangest Exoplanet Found Yet 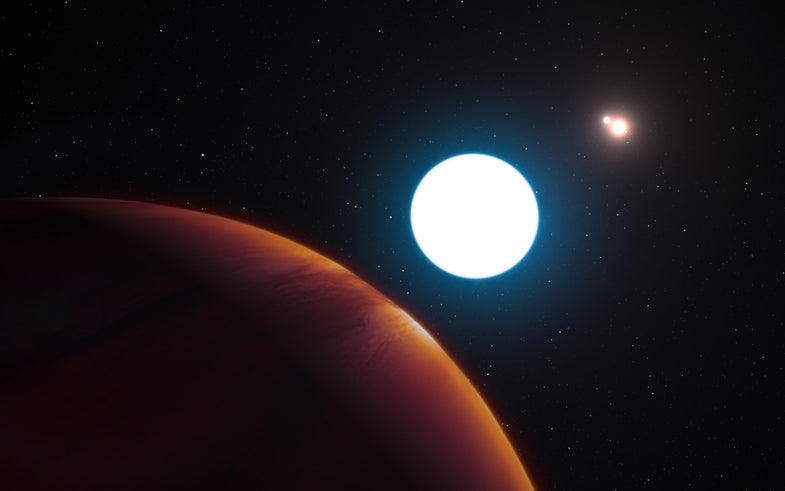 This exoplanet is called HD 131399Ab. It's part of a triple star system, sits further away from its parent star as Pluto, and is four times larger than Jupiter. Scientists are wondering how it got so far away from its host star without being flung into space by the other two stars. ESO/L. Calçada
SHARE

Imagine a planet, like Jupiter, but four times heavier. And it’s got a huge orbit, maybe twice as wide as Pluto’s. Oh, and it has three suns. That planet is real, and it’s only 320 light years away. Meet HD 131399Ab.

A team of researchers found this strange planet using the Very Large Telescope run by the European Southern Observatory (ESO) in the Atacama Desert in Chile, while looking for exoplanets around 100 young stars. The planet isn’t the biggest exoplanet, nor is it the first found in a three-star system, and the so-called Scorpion Planet Survey isn’t finished, so the researchers don’t know whether they’ll find other planets just like HD 131399Ab. But they think the combination of the planet’s size and location among its three suns still make it especially strange to us earthlings.

“This is crazier than anything our dynamicist” — the person who calculates how planets move — “knows about,” the study’s first author and University of Arizona graduate student Kevin Wagner told Popular Science.

The three stars in the system are HD 131399A (which I’ll call Sun A from now on), HD 131399B (Sun B) and HD 131399C (Sun C). The team won’t know how the planet fits into the whole system until they make more observations, but has a few ideas. HD 131399Ab might orbit Sun A, which spins like a mobile in tandem with Sun B and C, which orbit tightly around each other. The team published their findings today in the journal Science.

What makes HD 131399Ab unique is how far away the team found it from Sun A. The planet sits right on the border of the furthest possible place it could be without being flung into space by the gravity from Suns B and C, like a rubber band pulled as tight as possible right before snapping. “That the planet is so far away from the primary star (Sun A) and so close to the other stars (Suns B and C) is really surprising,” said Wagner. “We don’t think the planet formed where we see it today. It’s not impossible but … what’s more likely is it formed elsewhere, closer to [Sun A] or [Suns B and C], and then, through some scattering event, migrated to its current location”

The planet is also among the first batch of exoplanets discovered with direct imaging. Usually, astronomers just look at stars for a while and wait for the exoplanet to pass in front, like a distant eclipse. Direct imaging finds planets by detecting the heat the planets themselves give off instead. The thing is, direct imaging can only see big, hot planets far from their host star, since the filtering used to get rid of all the non-planet light might also filter out smaller closer planets, and colder planets won’t emit enough infrared light. Even at four times Jupiter’s mass, HD 131399Ab is still one of the lightest planets found with direct imaging.

Others agreed HD 131399Ab was a very interesting planet, but weren’t surprised by its observation. “The more extreme crazy things are the biggest, brightest, closest to something else or furthest from something else,” Alexander Mustill who models exoplanets and wasn’t involved with the study told Popular Science. “Those are the ones you see first.”

Mustill and Wagner both hope the direct imaging survey will give them more insight into how planets are formed in other star systems. We aren’t so sure just how common hot, young and distant planets like HD 131399Ab are. “If these massive distant planet formations are very common then we’ll need a [theoretical] model that forms these things easily and often,” said Mustill. “But if they only find one planet like this, then it becomes some kind of weird outlier that isn’t representative of how most other planetary systems form.”

Update: Some of the HD 131399Ab team is doing a Reddit Ask Me Anything tonight, Thursday from 5pm to 7pm Eastern.