No one really knows how to name exoplanets 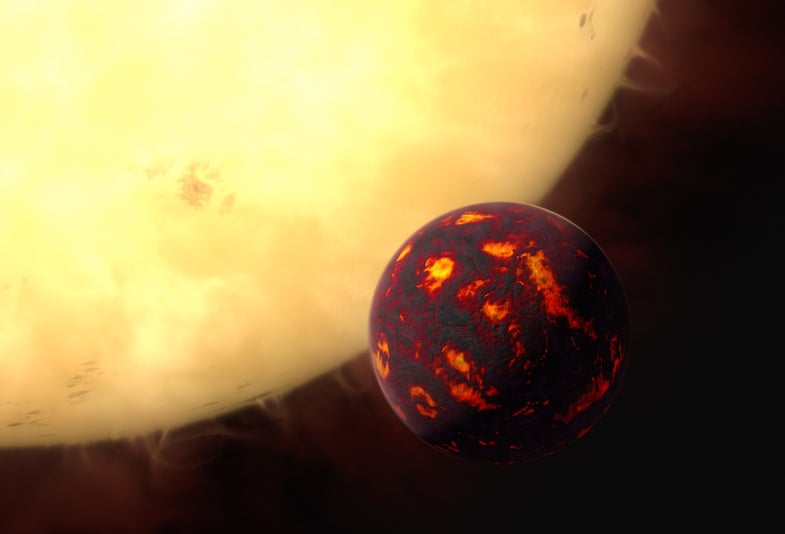 55 Cancri e, or Rho Cancri e, or Janssen, is one of the thousands of exoplanets stuck with multiple names because of inconsistent naming systems. ESA/Hubble
SHARE

55 Cancri e is experiencing a bit of an identity crisis. The planet, which orbits a star about 40 light-years away, also answers to 55 Cancri Ae, Rho Cancri e, HD 75732 e, and “Janssen.”

Janssen and the other planets in its star system — Galileo, Brahe, Lippershey, and Harriot — were part of a 2015 effort by the International Astronomical Union (IAU) to provide common names to 14 stars and the 31 planets that orbit them.

It’s a small step in the Sisyphean task of bringing order to the night sky. As the number of confirmed planets beyond our solar system (exoplanets) has exploded in recent decades from dozens to thousands, the patchwork naming systems developed for them have not kept pace. Even the IAU’s announcement this past week that it had approved names for 227 more stars is a drop in the bucket to the number of known stars and planets out there.

All of these exoplanets already have official designations used to name them in star catalogs, those massive tables and lists of stars in the sky. But they’re boring. “The scientific name can be a very long list of numbers and letters,” says Alain Lecavelier des Etangs, the president of the Exoplanets and the Solar System Commission at the IAU. “These names are not catchy.”

And to make matters worse, each exoplanet often has more than one scientific name. It’s not the fault of the exoplanets, though, because the problem predates their discoveries by centuries.

Exoplanets are named after their host star’s scientific designation. Janssen, for example, orbits the star 55 Cancri — or Rho Cancri, or HD 75732, depending on who you ask. Each references a different star catalog. 55 Cancri comes from England’s first Astronomer Royal, John Flamsteed, who in the early 18th century catalogued over 2,500 stars visible from southern England. Rho Cancri comes from Johann Bayer’s 1603 designations for over 1,500 of the brightest stars visible from Germany. The comparatively number-heavy HD 75732 comes from the Henry Draper Catalogue, an early twentieth century effort to catalogue more than 225,000 stars. Each cataloging effort gave the star another designation in line with its own naming system.

Which is why the star 55 Cancri, which for the sake of simplicity can now be referred to as Copernicus (thanks to the IAU’s 2015 effort), also has other less commonly used designations like HR 3522, Gliese 324, and HIP 43587, among others.

Exoplanets take the name of their star, plus a lowercase letter to distinguish them as their own body. For multi-planet systems, the planets are lettered as they go outward. The first planet is b, the second c, and so on (the lowercase a is often reserved for the star itself).

The natural guess for Janssen, then, would be that it’s fourth planet from the star at the center of the 55 Cancri system. It’s not. It’s the closest, orbiting the star once every 18 hours – so close astronomers couldn’t decide if it was even real for over six years. When it finally received its scientific designations, three other planets in the system had already been identified and named. So even though 55 Cancri e is the first planet out, it’s the fourth one in the alphabetical naming line-up.

In situations when astronomers discover an exoplanet closer to its star than previously discovered planets in the system, they have no choice but to tweak the rules of the convention and upset the alphabetical order. There’s no way to tell, from scientific designations, whether a planet’s letter refers to its orbit or the order of discovery.

So to review: To name an exoplanet, take any one of the host star’s two or three or five catalog names and append a letter to the end to designate where the planet is in the order outward from the star — unless it’s discovered later and closer to the star than its sibling planets. In that case, just stick the next available letter onto the end. Yeah, it’s a mess. In the worst case scenarios, you end up with exoplanets like Gliese 436 b, which has 34 different scientific designations.

More recent exoplanet hunting projects have continued to complicate matters. NASA’s Kepler space observatory has singlehandedly discovered over 2,300 exoplanets, many orbiting stars too distant to be seen with the naked eye. To catalog them, the Kepler team created their own designation, adding planets like Kepler-22b and Kepler-444c into the mix. In case you weren’t exasperated enough, the Kepler team maintains a separate designation for objects that might be planets but haven’t been confirmed, called Kepler Objects of Interest, meaning there are more objects out there with names like KOI-1118.01. And they’re not alone. Other planet-hunting projects create their own catalog systems too.

That was the goal behind last year’s Name ExoWorlds effort to test methods of giving these stars and planets common names. 573,242 votes were cast for the 14 solar systems being considered. Names were suggested from astronomical groups around the world and had to adhere to a strict set of guidelines. The IAU did not consider names of a commercial nature, the names of living individuals, the names of pets, or the names of individuals primarily known for political or religious activities.

In the end, the IAU approved names ranging from the most famous telescope makers (Janssen and company) to old literary characters (a system of four planets received the names of the main characters from Don Quixote) to mythological figures from around the world.

Lecavelier des Etangs thinks people will respond well to these names, and hopes the IAU will continue its efforts to give common names to stars and their planets. People “prefer a name like Ogma [an Irish mythological figure] to HD 149026 b,” he says.

And though it sounds painful to give poor Gliese 436 b a 35th name to answer to, at least this one will be catchy.