Fifty times the size of Jupiter. 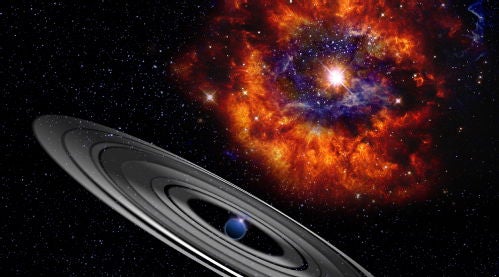 There’s a big eclipse coming up. No, not the total solar eclipse in August that we’re all really excited about. This one will happen in September around a star 1,000 light years away. Sure, it will be much more difficult to observe than our Moon passing in front of the Sun, but it could give us clues about a distant solar system.

In a paper released on arXiv and set to be published in the Monthly Notices of the Royal Astronomical Society, astrophysicists announced that they think they’ve found a massive planet 50 times larger than Jupiter with a vast ringed disc—think Saturn, but bigger—surrounding the entire planet.

It’s located 1,000 light years away in the Orion system, orbiting a young, bright star that is slightly larger, but the same temperature as our Sun. Over the past 15 years, various telescopes observed the star. In 2008 and 2011 researchers noticed odd eclipses—or transits—every two and a half years, during which the light from the star dimmed for between two and three weeks.

Watching for a star to dim, and measuring the resulting dip in brightness as a planet passes between the star and an observing telescope, is one of the principle ways that researchers can glean information about exoplanets.

“What’s exciting is that during both eclipses we see the light from the star change rapidly, and that suggests that there are rings in the eclipsing object, but these rings are many times larger than the rings around Saturn,” astronomer Matthew Kenworthy said in a statement.

This isn’t the first ringed object that’s been found outside our solar system, but it might be the first with a regular, predictable orbital period.

But it’s important to note that this giant planet with rings hasn’t been officially found yet. Telescopes all over the world will be pointing at star PDS 110 this September 9-30 when the ringed object is expected to make an appearance again. Ground-based telescopes will have just a few hours each night to observe the star (space-based telescopes might have a more uninterrupted view). The researchers hope that the observations this fall will show that the dimming of the star is due to the crossing of a giant exoplanet and a ringed disc of dust and rock where moons are just starting to form.