Some 12 million light-years from Earth in the southern constellation of Centaurus, the most prominent source of galactic radio emissions... 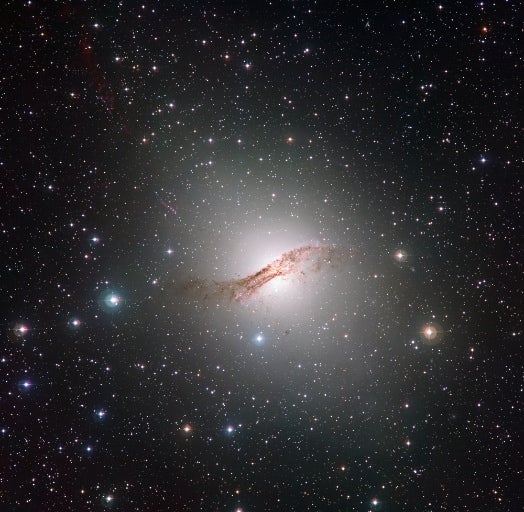 Some 12 million light-years from Earth in the southern constellation of Centaurus, the most prominent source of galactic radio emissions in the sky rests in the galaxy Centaurus A. Here, a truly gigantic black hole 100 million times more massive than our sun is (most likely) ejecting huge amounts of energy as it helps rip another galaxy apart, and the European Southern Observatory has snapped a brand new image of the elliptical galaxy in stunning new resolution.

From its perch in Chile’s Atacama Desert, the ESO’s Las Silla Observatory produced this stunning astro-image using its Wide Field Imager, capturing the elongated, elliptical shape of Centaurus A and the opaque glow of its billions of older stars surrounding the dusty core of the galaxy–or perhaps galaxies. Astronomers believe that the strong radio signals emanating from Centaurus A could partially be caused by a galactic collision as the larger elliptical galaxy rips apart a smaller spiral galaxy that wandered too near.

More on Centaurus A over at SPACE.