Biologists vastly underestimated how much whales eat and poop

The creatures' large body size made quantifying their diets and waste an arduous task. 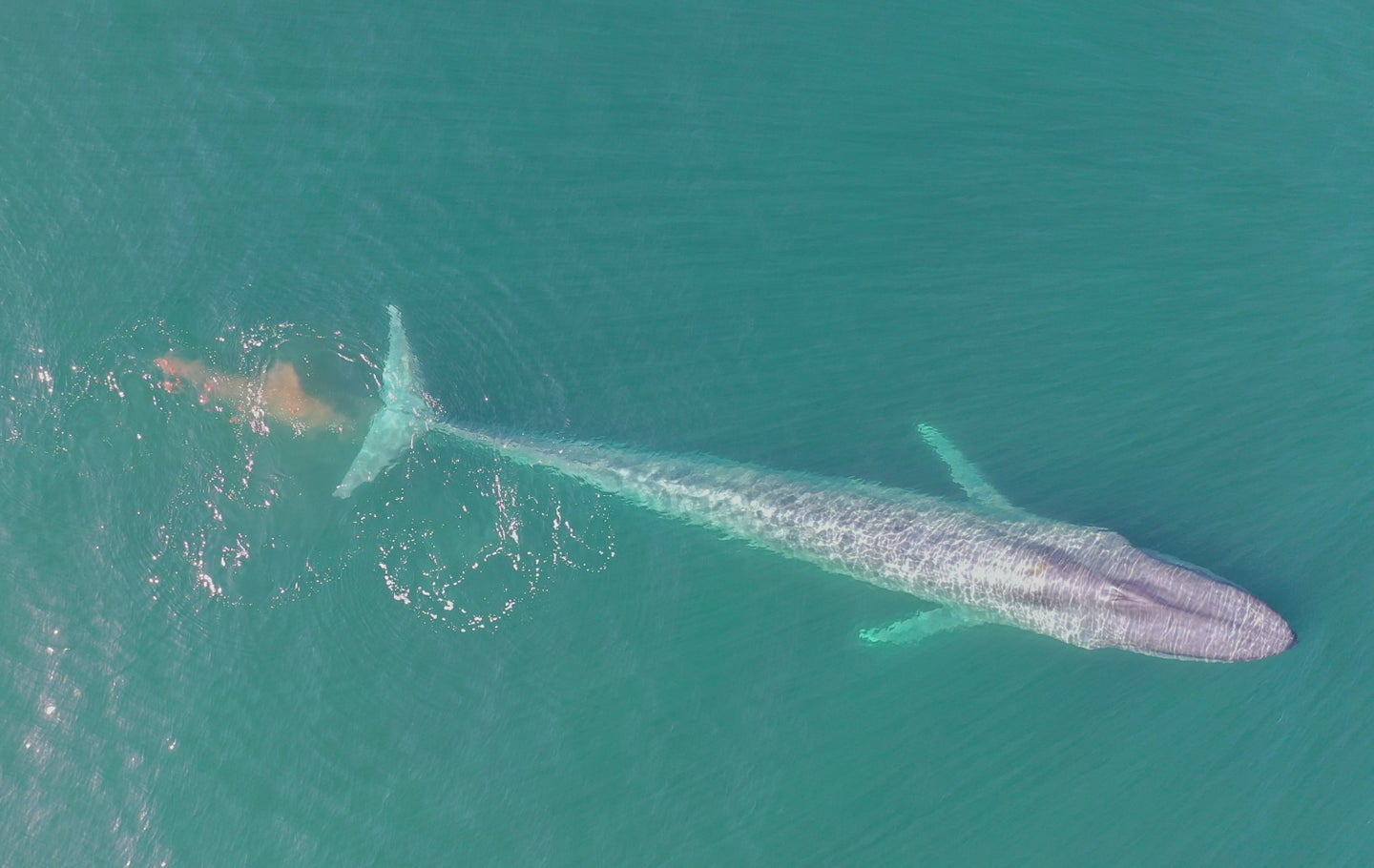 A blue whale defecating off the coast of California. Estimating how much whales eat and poop is quite hard, and it turns out researchers might have vastly underestimated these bodily functions. Elliott Hazen under NOAA/NMFS permit 16111
SHARE

Baleen whales are among the biggest creatures ever to exist on earth. But they largely spend their lives eating tiny shrimplike creatures called krill, which they strain out of the ocean in huge mouthfuls. To power their huge bodies and planetary migrations, they need to eat millions upon millions of the bitty crustaceans.

But exactly how many? As it turns out, scientists who study whales have almost no idea how much they eat, how much they poop, and what the loss of that poop might have done to ecosystems when whaling companies killed millions of whales over the last 100 years.

“We don’t remember how the world once was, because we modified it away from those baselines,” says Nick Pyenson, a paleontologist at the Smithsonian’s Museum of Natural History who studies marine mammals, and coauthor of a new study in Nature that sets out to answer those questions. “Just like we have no cultural memory for passenger pigeons blotting out the sun, or the scale of American bisons. We don’t know what the oceans were like when there were many more whales.”

The sheer size of these creatures makes studying them, and their poop, a unique challenge.

“These are enormous animals, many of which are the size of a school bus or an airplane,” says Matthew Savoca, the study’s lead author, and an ecologist at Stanford University. “They feed well below the surface where we can’t see them. You can’t hold them in captivity and feed them a measured diet. So initially what seems rather simple becomes quite challenging.”

Previous estimates, Savoca says, didn’t look at the whale directly. Instead, they took the diet of smaller mammals, like dolphins, and essentially scaled them up based on the size of whales, or estimated based on the contents of dead whales’ stomachs.

In the new study, to get a number based on firmer physical data, the team used decades of recordings from different sources: They tracked the whales with GPS tags, which allowed them to record each time a whale lunged after prey. They used drones and sonar to measure the whale’s mouths, and the size of krill swarms, which gave an estimate of how much a whale could scoop up in a gulp.

To their surprise, they found that whales eat dramatically more than previously thought. By way of comparison, previous estimates had found that all baleen whales off the Pacific coast of North America ate 2 million metric tons of seafood every year. The new research found that instead, each species of whale probably eats 2 million metric tons, and that the total haul is three times larger, or more.

But that finding poses another question. Industrial whaling in the 19th and 20th century pushed many whales to the brink of extinction, with the worst impacts on the Southern Ocean, around Antarctica. Over the course of just a few decades, humans killed about 99 percent of the world’s blue whales. All those whales had to eat something. But existing populations of prey species, and krill in particular, are nowhere near large enough to support those whales, especially if they eat more than previously thought.

This question isn’t new. When whales disappeared, fisheries experts expected krill populations to boom, since they were no longer being consumed en masse. And for a brief period, populations of seals and penguins in the Southern Ocean shot up, suggesting that there was more krill around to be had. But then krill populations collapsed.

The new research suggests a resolution to the puzzle of where the krill went, known as the krill paradox. If whales eat significantly more than previously thought, then they also poop more. Whale poop is serious business: A single blue whale eats around 16 metric tons of krill a day, and ejects volcanic amounts of poop. And that poop is full of iron. Iron is rare in the Southern Ocean, and the bounty in whale poop could lead to an explosion in the growth of the tiny algaes and creatures at the bottom of the food chain. Those in turn would feed huge swarms of krill, which would feed whales.

In an accompanying essay, Victor Smetacek, a longtime marine microorganism researcher at the Alfred Wegener Institute Helmholtz Centre for Polar and Marine Research, says that early European sailors in the region described “the sea surface as being coloured red by swarming krill, and reported that water spouts of feeding whales stretched from horizon to horizon.” (Smetacek was not involved in the paper, but has previously written papers on the relationship between iron and whales.)

“When whales eat and poop, they’re doing it high up in the water column,” says Pyenson. “So instead of those nutrients just falling down to the sea floor and then being locked away, those nutrients are resuspended,” a process that Smetacek likens to ploughing nutrients into a field.

But take out the whales, which recycle the iron, and the whole food web falls apart.

If that’s right, it would cast whales not as a competitor to human fishing, but as the key to flourishing swarms of krill and fish. “If you let whales return all the way back to their pre-whaling levels,” says Pyenson, “Our numbers tell you that there should be the recovery of an immense amount of function for marine ecosystems.”

The implication, Smetacek believes, is that we need to kickstart the entire process of recovery with iron: seeding the Southern Ocean could prompt a “green wave” of growth that would feed a rebounding whale population.

But Maria Maldonado, who studies the movement of metals in ocean ecosystems at the University of British Columbia, thinks the research overstates the role of whales in that story. Her research has previously found that even in the 1900s, whales would have contributed just 1/1000th of the iron that microorganisms do. “These guys, the little guys, are the ones that are doing really everything,” she says.

Her 1900 estimates, she notes, are in line with those of the new paper. “It’s a very sexy story,” she says, but she doesn’t think that it shows that whales are a transformative source of iron.

Evgeny Pakhomov, an ocean ecologist at the University of British Columbia who coauthored Maldonado’s research, agreed. The timing of the decline in ocean productivity doesn’t match up with the decline of whales, he says. And there are global processes, like climate change, that dwarf the impacts of whales on krill.

It could simply be that the loss of whales and the loss of krill happened for different reasons, and the paradox is a coincidence of timing. (Although the root cause would still be human industry.) “Nobody ever said whale poo does not matter…but other processes are much more important. …The bottom line is that if someone says that the removal of whales as natural fertilizers are responsible for decline in Southern Ocean productivity, that is totally one sided and largely incomplete.”

Savoca agrees that microorganisms almost certainly hold more iron. “I think the issue here is the whales behavior, in terms of transforming and moving that iron,” he says. Both he and Smetacek believe that iron from whale poop impacts the ecosystem differently, allowing it to hang around near the surface, rather than sinking to the ocean floor.

Where the researchers agree, however, is that whales must have done something to the ocean that we no longer see. “We don’t think that whales are big contributors to iron recycling,” says Maldonado, “but we really think they were shaping the ecosystem.” She says that over the last few decades, populations of salps—tiny jellyfish-like creatures—have proliferated, while krill have shrunk, and that may be related to whales.

That’s the key point: We know that whales were so big, and so voracious, that their wholesale destruction left a gaping hole in ecosystems they once shaped. But without knowing what shape that hole is, we won’t be able to help it heal.