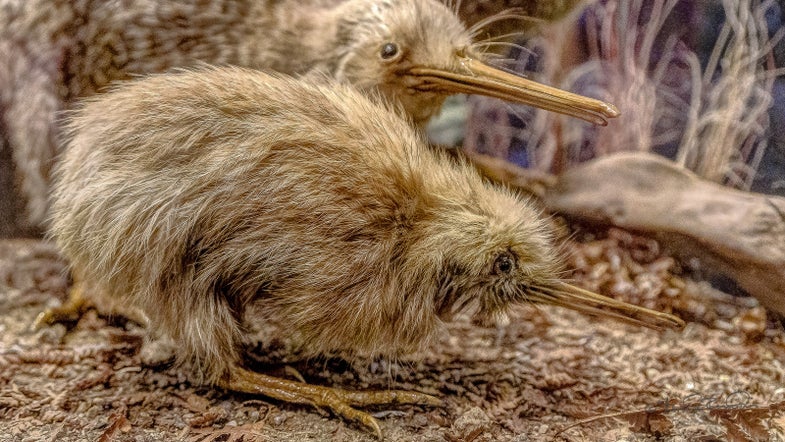 Kiwis—the birds, not the people or the fruit—are as un-bird-like as you can get while still being a nationally treasured bird. And, as some people found out on Twitter and Reddit found out this weekend, they lay unbelievably large eggs.

Here is a picture of a kiwi, and and X-ray of a Kiwi carrying an egg.

You may start screaming now. pic.twitter.com/0dPk7IN5MV

That is not photoshopped. It is an actual x-ray image showing an egg roughly one-quarter the mass of the bird carrying it. If humans carried babies that big, we’d give birth to 30-pound infants. How do kiwis manage this? Not without some significant challenges. According to Kiwis for Kiwis, the best-named conservation group ever, a female kiwi (bird) has to eat three times as many calories as usual to feed the growing egg inside her. Her fuzzy belly will eventually drag on the ground and get so big that she’ll have to fast for the last few days of her pregnancy—there won’t be any room for food.

This mostly isn’t a problem for the kiwi, because these birds can’t fly. Their feathers are more like fine, fluffy hairs and their bones aren’t hollow—they have marrow like a mammal. So not only do they not need to worry about lifting themselves up off the ground with their added girth, but they’ve got skeletons strong enough to support the added weight.

Scientists used to think these giant eggs were the result of a strange evolutionary mishap. Perhaps ancient kiwis were larger, and as their body size shrank they simply failed to evolve smaller eggs. Since the females could still survive, there was no need to weed out enormous ovum. This made sense given the birds that kiwis share an evolutionary branch with. Ostriches and emus are the most famous, and both lay enormous eggs. Kiwis are mostly closely related to elephant birds, and you can guess how big those were based on the name.

But it turns out that’s not true. Kiwis aren’t an evolutionary accident. They’re just reproducing more like mammals than like birds. Mammals give birth to live young, often at a late enough stage in development that their babies are largely self-sufficient (humans are a notable exception; we come out half-baked and helpless). Birds don’t. They lay eggs, and even once those hatch the babies are fragile balls of scraggly fluff. Kiwi babies pop out mostly ready for primetime, though, ready to run around and evade predators on their own—the parents skip town pretty much immediately.

Kiwis also don’t behave like most birds. For starters, they’re nocturnal, so in some ways they’re more like mammalian bats than most other avians. Kiwis have terrible eyesight, to the point that about a third of all native kiwis have been found to have eye lesions that don’t seem to affect their ability to hunt. Instead, they use their unusually well-developed sense of smell. By rooting around in dirt with their long, thin beaks they can sniff out cicadas and worms.

And did we mention they can run as fast as people? Despite their small size—they’re similar to chickens—they’ve got strong little legs.

All these strange mammalian-like adaptations might be because kiwis could fill that slot in the New Zealand ecosystem. Aside from bats, the island nation has no native land mammals. All the stoats, weasels, rabbits, and sheep living there were imported by sailors. It’s because of these invasive critters that all five kiwi species are now threatened or nearly extinct. Any flightless bird that can hardly walk when it’s carrying an egg is going to be good prey for a land mammal. That’s why New Zealand conservation groups are working so hard to rid their country of essentially all mammals (barring sheep): to save their native fauna.

The kiwi is a strange bird, to be sure, but that’s the reason to save it. It’s unusual, like much of the other life that developed on the isolated New Zealand isles. If they can survive birthing an egg one-fifth their body size, we should at least try to help them survive humanity.