Food gets lost in transit at every stage from farm to table. 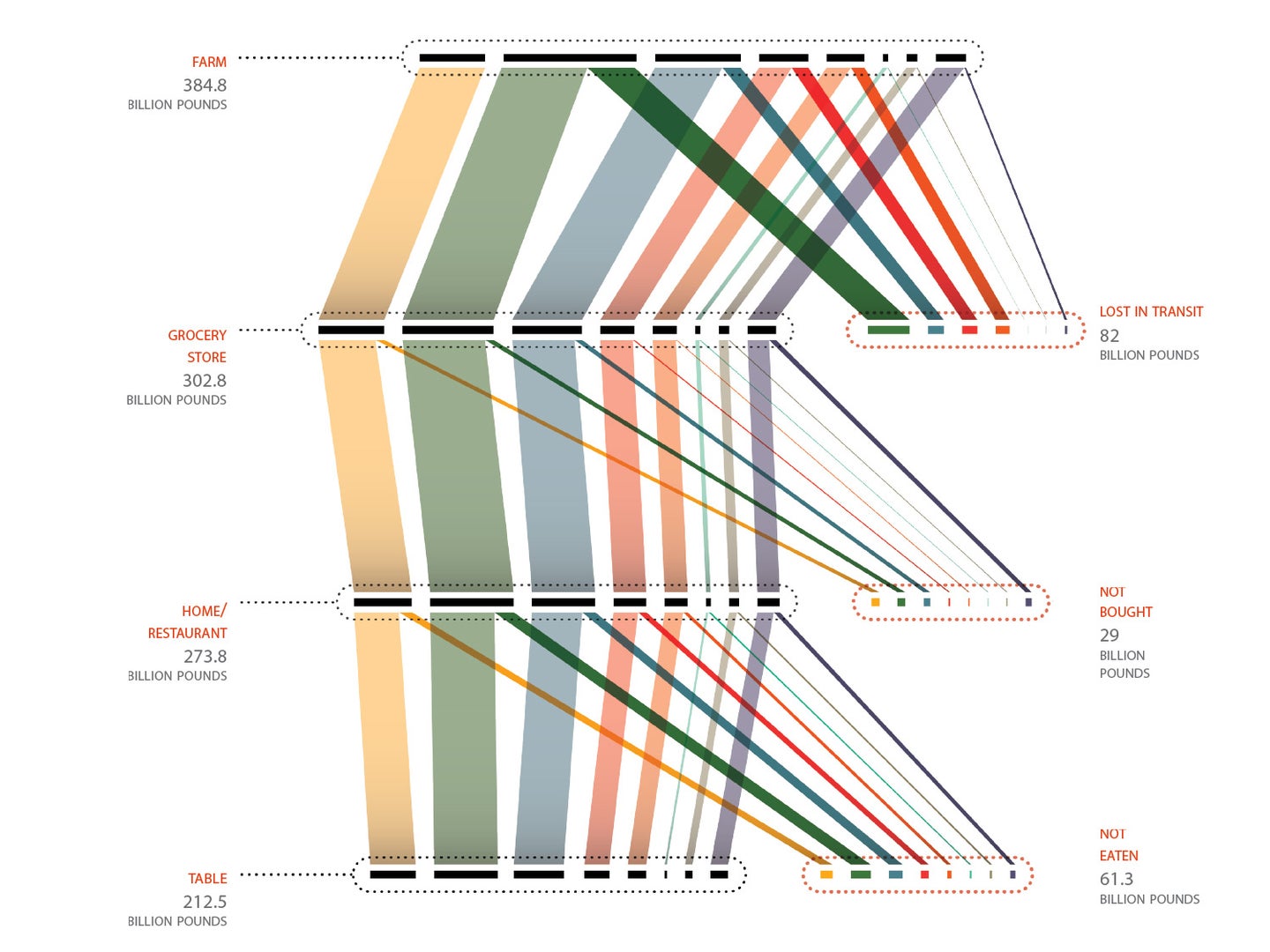 Only 60 percent of the food we grow in the United States makes it into our mouths. The rest drops out of the supply chain, bit by bit, as grub wends its way to our plates. Pests chomp some in the field and vittles inevitably spoil on their way to the store, but picky grocers and shoppers waste plenty as well. Here’s a rough breakdown of when and why we squander our sustenance.

1. Withered on the vine

Farmers frequently seed more crops than they think they’ll sell to backstop against leaf-​­eating pests, catastrophic weather, and sudden spikes in demand. If growers don’t need the excess, they’ll let it sit and rot in the fields rather than pay to harvest it. Producers don’t weigh their unused acres, so we can only estimate how much goes untouched: around 7 percent each year.

2. Vanished on the way

Researchers know lots of food gets lost on its journey from the farm to the grocery store, but they struggle to figure out what part of the trip is the most wasteful. Scraps of beef wind up on the factory floor, and perishable fruits spoil while they sit in trucks or piled up in storage. Some data suggests farmers also throw out safe-to-eat veggies simply because they’re too ugly for the supermarket scene.

3. Left on the shelf

Grocers and restaurant-supply stores prefer to overstock, which frequently leads to extra edibles. Heaps of produce often go bad on the shelf. Seasonal items, such as the hundreds of Thanksgiving turkeys that go unclaimed, get sent to the dumpster once the holidays wane. Like many growers, ­higher-​end grocers also dump misshapen or blemished food that shoppers pass by.

4. Cast out from the kitchen

Shoppers are proportionally the biggest food-waste culprits. We routinely dispose of skins, rinds, and other ­edible-​and-​­nutritious scraps that don’t suit our ­palates—​and even careful shoppers can forget cheese or chicken in the fridge until it’s fuzzy or rancid. These losses add up: According to a USDA study, the average ­American dumps $371 worth of uneaten grub per year.