Seals and robots are on the case. 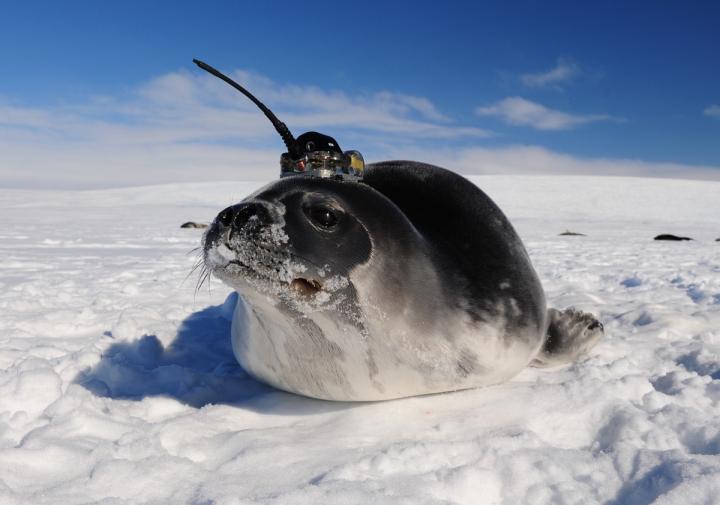 Winter in Antarctica is frigid, persistently dark, violently stormy, and, at least in some years, home to puzzling holes in the sea ice. Known as polynyas, these strange pits “have been this enduring mystery in polar oceanography” since several large ones were first spotted in the 1970s, says Ethan Campbell, a doctoral student in the School of Oceanography at the University of Washington and the author of a new study that offers tantalizing clues about how polynyas form and where they fit in the study of the vast Southern Ocean.

In Antarctica, these craters function as a rest stop for animals like seals who swim under the ice, giving them somewhere to come up for air. However, Campbell says researchers think there’s a lot more to them than that. He and others think the holes—because they’re warm and melt sea ice that holds carbon—also release a significant amount of carbon dioxide into the atmosphere. That makes understanding their role important for climate science.

Automated robotic devices are crucial to understanding these holes. “We cannot go to Antarctica when the polynya opens in winter. Satellites can see that the sea ice opens, but they cannot look at the effect of this opening on the water column,” Céline Heuzé, a University of Gothenburg oceanographer who wasn’t involved in the research but did review the paper before publication, told Popular Science in an email. The robots used in this study are some of the first who can work in the icy waters of Antarctica, allowing researchers to study a place they can’t get to.

Around 200 of the float robots, which travel beneath water and ice, intermittently bobbing to the surface to transmit information, have been released by the Southern Ocean Carbon and Climate Observations and Modeling Project to drift around the ocean and under the ice. In late 2014, two of them entered the Weddell Sea, where the 1970s polynyas opened up, to study the area.

Unexpectedly, two of the floats became trapped on the Maud Rise, an underwater mountain that affects currents, says Campbell. A rotating cylinder of water positioned over the seamounts held the floats in place, he says. Most of the time the floats don’t stay put. When a large polynya opened up there again in 2016 and again in 2017 the floats were in perfect position to send continuous data about the site. “It was just dumb luck. It was incredible,” says Campbell. “In 2017, two of them actually surfaced inside the polynya, which is a very rare occurrence.”

The team also relied on information gathered from “instrumented seals” with temperature probes glued to their heads (we told you). This kind of data collection, which has been going on for more than a decade, gave the team insight into what normal conditions in that ocean region are like, since no seals found these polynyas or surfaced within them.

Using these two sources of data alongside satellite data, the research team was able to show evidence that deep ocean mixing—when (relatively) warm upper-ocean water and freezing, slow-moving lower-ocean water mix—occurs within them. This is significant, says Campbell, “because the deep ocean is generally a very quiet place where changes happen slowly. Within these polynyas, changes happen a lot quicker.”

“To me, this study raises even more questions than it answers,” writes Heuzé. These queries include understanding why there was a forty-year gap between the development of big polynyas in the Weddell Sea, as well as why small ones instead of large ones developed in 2018, and how all these ice holes affect atmospheric conditions in the region.

Campbell and his team are still working on some of these questions, and what they find may have a huge impact for the future of climate modeling. Currently, he says, many climate models predict polynyas happening more often than they actually are occurring in the ocean. If researchers can better figure out what conditions lead to polynyas, they could be better equipped to predict when one might form next.

This article has been updated with the correct spelling of the Weddell Sea. A previous version called the body of water, the Wendell Sea. We regret the error.