How DNA Scissors Can Perform Surgery Directly On Your Genes

These gene-slicers may help tackle HIV, Alzheimer's, and brain cancer. 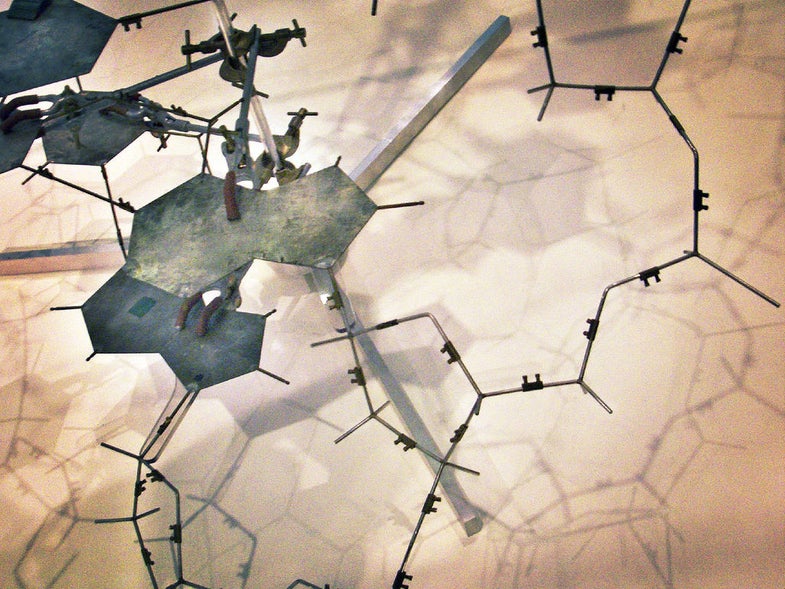 Jay Johnson’s DNA was cut into pieces. Tiny molecular scissors chopped it into slices the cell couldn’t readily repair. The cell did its best at a speedy patch-up job, but the gene was left effectively useless. As the battered remnants were about to be infused back into Johnson’s body, he sat in the quiet hospital room at the University of Pennsylvania and contemplated his fate. “God, if this really works,” he thought, “this will be amazing.”

Jay Johnson was part of a clinical trial testing a radical technology that precisely cuts and modifies DNA that may cure his HIV. The new treatment is being tested on diseases long thought to be beyond the reach of genetic therapies, including HIV, brain cancer, and Alzheimer’s disease. Inspired by nature and engineered by researchers, scientists have discovered three classes of proteins that cut and paste DNA, all known by their somewhat cumbersome acronyms: ZFNs, TALENs and CRISPRs.

When exploring the genetic code of the African clawed frog, scientists noted an odd protein tightly bound to the frog’s DNA. When they mapped the 3D architecture of the protein, they were surprised to see elongated loops resembling fingers, grasping the frog’s genes with extraordinary strength. Holding the loops together was a stable zinc ion. Because of its unusual hand-like structure, they named the protein zinc finger.

A decade later Srinivasan Chandrasegaran, then a postdoctoral fellow at Johns Hopkins, wondered how he could make practical use of the sticky proteins. The problem was that each zinc finger recognized only a tiny chunk of DNA, about three bases. This kept the collection from being specific enough to target genes in people. If he wanted to use the proteins to target a specific piece of DNA, he needed more length. Chandra, as his friends called him, had a simple solution. He stitched six of the proteins together so that instead of just three bases, he had eighteen, enough to recognize a fragment of a gene.

But binding the DNA wasn’t enough. He also had to figure out a way to alter it. Chandra decided to borrow an enzyme used by bacteria to cut out viruses from their genetic code. Called restriction endonucleases, this clever defense mechanism is an ideal way to cut DNA. Chandra chose the FokI restriction enzyme, known for its ability to make a clean break. Chandra combined the DNA gripping ability of the zinc fingers with the DNA cutting enzyme. A zinc finger nuclease (ZFN) was born.

To make the technology safe in humans, two ZFNs are delivered directly to the nucleus of the cell, where they bind to two separate pieces of DNA surrounding their genetic ‘prey.’ Then the cutting enzymes dimerize, locking onto each other. Only after they’re locked together can the enzymes engage, snipping through the DNA. The cell has trouble repairing this kind of double-stranded break, so the end result is a mangled and dysfunctional gene. A similar process can be used to repair a gene instead of breaking it, allowing genetic material to be inserted into the cell. In a major breakthrough, scientists using this method can now target just about any gene.

A small California biotech, Sangamo Biosciences, has developed ZFNs commercially. Sangamo is currently conducting clinical trials for therapies for everything from HIV to hemophilia to Alzheimer’s disease.

Breakthroughs seem imminent. In March, an article published in the New England Journal of Medicine reported results from a Phase II clinical trial for HIV. This trial treated HIV by cutting the CCR5 gene. CCR5 is kind of like an appendix–it’s not necessary for human health. On the other hand, it’s vital for HIV. The vast majority of HIV strains need the CCR5 receptor to enter human cells. Thanks to a mutation called Δ32, people with a defective gene are resistant to the virus, which is another reason why Sangamo hopes they can treat HIV by carving up the gene. Their study found that in the 12 people tested, the technology is safe. It’s still very early, but the data is promising, showing a rise in cells modified by the ZFNs corresponding to a decrease in HIV. Jay Johnson is one of the 12 receiving this cutting edge therapy in hopes of curing his HIV.

While ZFNs came from a small, aquatic frog, TALENs were adapted from bacteria, specifically a plant pathogen named Xanthomomas, which preys upon the plant’s genetic code.

Feng Zhang was a graduate student at MIT and frustrated by the complexity of genome modification. Because ZFNs grasp DNA with their finger-like elongations, they are difficult to design and expensive to produce. To get around this problem, Zhang turned to TALENs.

There are no finger-like structures in these proteins. Instead the DNA binding is reminiscent of how it occurs naturally in our cells. The amino acids that make up the TALEN precisely align with the DNA sequences they cut. Changing the amino acids in the TALEN changes which sequences it binds to, making customized alterations of the proteins far simpler. Even better, each TALEN recognizes 17 bases of DNA, plenty long enough to recognize a piece of human DNA. That’s part of the reason TALENs have taken the lead from ZFNs.

TALENs use the same FokI enzyme that cuts through DNA in ZFNs, which makes it relatively easy to design a TALEN capable of specifically binding human DNA. In both processes, two binding agents flank the gene and then move in, the enzyme creating a double-stranded break the cell can’t recover from.

While ZFNs have been around for a decade, TALENs are relatively new. They don’t have the rigorous safety testing available in humans ZFNs do. But while the research is ongoing, where TALENs have proven useful is in disease modeling. Scientists have created disease cell lines, identical except for a single TALEN-created mutation. It’s an ideal system for reverse genetics, tracing a lone genetic mutation to its effect in the cell. Disease models have now been made for hepatitis C, blood cholesterol levels, insulin sensitivity, and others. TALENs are effective at genome editing, and because of their innate simplicity, may can be used in humans.

The newest kids on the DNA chopping block are CRISPRs. Like TALENs, CRISPRs arise from bacterial defenses against viruses. They are are small repeating palindromes spaced throughout the bacterial genome. In between these repeating sequences are “guides,” small chunks of genetic code that match those of the invaders. They lead the CRISPR to the right spot in the DNA. With their help, the CRISPRs bind to the target DNA, forming a tight structure with the intruder’s genetic code. Instead of using the FokI nuclease like ZFNs and TALENs, CRISPRs use Cas9, a similar bacterial enzyme, capable of making deep cuts in DNA. But the effect of the enzyme is the same: because it creates a double-stranded break, the cell can’t repair it. Just like with ZFNs and TALENs, the gene is taken out of commission. (Also like ZFNs and TALENs, DNA can be added at the cut site to potentially repair a gene.)

Of the three, CRISPRs have the most elegant design. There’s no need for complicated protein structure here, just clean lines of genetic code tied to the cutting enzyme. The simplicity creates a streamlined cell delivery, which is a big advantage. Yet in some ways, the sheer simplicity is frightening. The system doesn’t have the same safeguards that prevent against off-target effects, like if the protein goes rogue and potentially cuts at an unintended site.

Feng Zhang has been at the forefront of CRISPR development, rapidly producing mutant cell lines and mouse models. In just one year, researchers have used CRISPRs to target genes in models of cystic fibrosis, sickle cell anemia, and autism. While developing animal models of disease used to take months and even years, it’s now being done in weeks.

CRISPR technology is moving ahead at lightning speed. This February, scientists in China published their study of CRISPRs in monkey embryos. They targeted physiological genes involved in development. The two infant primates are now under close observation. Remarkably, the researchers were able to alter two genes in a single step. Despite the worries of off-target effects, none have been observed. Instead, other fears have been raised. Some groups are concerned that this technology is likely to expand the role of animal testing. One thing is certain: With the use of CRISPRs in primate models, the technology is inching closer to use in humans.

The potential of CRISPRs is clear in a recent Nature Biotechnology study. Researchers at MIT used the technology to correct a mutation in the FAH gene in a mouse model of a rare human genetic disorder called tyrosinemia. The disorder causes an excess of the amino acid tyrosine, which can lead to liver failure and even death. Humans with the disease take a drug to control the production of the amino acid. In the mouse model, animals with the disorder controlled the disease with the same drug. But after CRISPRs were delivered to the animals, the modified cells proliferated, eventually making up one-third of all the animals’ liver cells and ultimately curing the three mice tested.

Genomic surgery has the potential to treat an incredible variety of human disease. But along with this potential comes concerns, both ethical and scientific, of forever altering a person’s DNA.

Back at the University of Pennsylvania hospital, Jay Johnson was optimistic as the needle pricked into his vein to deliver his own chopped up DNA back into his bloodstream. It took only a few minutes for the ZFN treated cells to be infused into his body. Ten minutes later he started to feel extremely cold. Twenty minutes later the cramping began. He felt like his “whole body was a big ball of knots.” Jay Johnson was the only person in the group of twelve to experience an adverse reaction. His experience is an important reminder that these techniques are not just about the conceptual beauty and function of DNA-cutting proteins. When put into practice, the techniques are being used on people—who by necessity are guinea pigs for the emerging technology.

Still, despite his adverse reaction, Jay Johnson is healthy and would gladly sign up for another clinical trial. He’s not fearful of the technique, only hopeful for the potential benefits. His participation in research is, he says, “Not only for myself, but for science.”