Rollercoasters are stressful and that’s why you like them

The psychology behind your love of twists and turns. 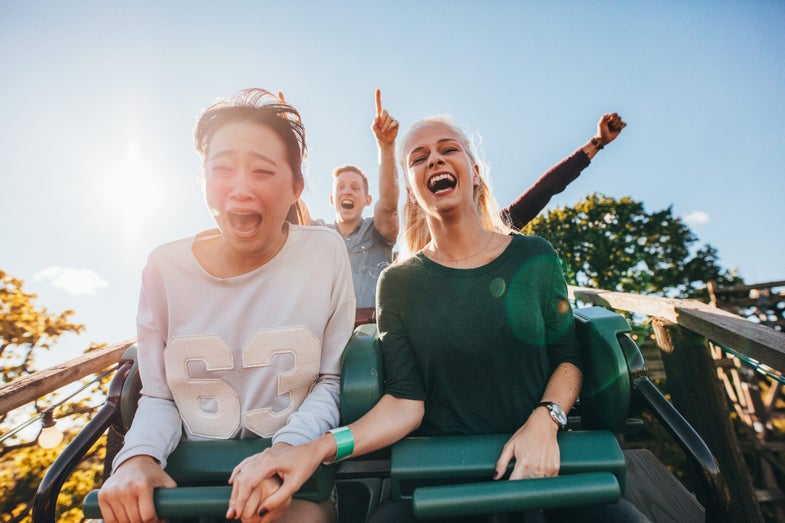 Roller coasters may seem like a very modern type of entertainment—constantly getting bigger, faster and scarier thanks to advances in technology. But they actually date back to the mid-1800s. Gravity-propelled railways built to transport coal from up in the mountains down to the town in Pennsylvania were hired out at weekends by fare-paying passengers riding purely for the fun of it. Today theme parks are big business. But with queues occasionally as long as eight hours for an average ride of under two minutes—not to mention reports of riders suffering strokes, brain deformation, and serious injury due to crashes—how come we put ourselves through it? What is it about roller coasters that some love so much, and is it an experience we tend to like less as we get older?

Enjoying roller coasters is linked to sensation seeking—the tendency to enjoy varied, novel, and intense physical experiences such as rock climbing and parachute jumping. But what sensation do roller coasters provide that is so alluring? At first glance, it may seem to be down to the experience of speed. But the evidence for linking sensation seeking to speed is not compelling. For example, when it comes to driving at speeds above the legal limit, many people do it, not just sensation seekers.

Perhaps the draw of roller coasters is the enjoyment of the visceral sensation of fear itself, much like watching a horror movie. Physical signs of fear such as a pounding heart, faster breathing, and an energy boost caused by the release of glucose are known collectively as the “fight or flight response.” We know that a roller coaster ride is likely to trigger this response thanks to researchers who measured the heart rates of riders on the double-corkscrew Coca Cola Roller in 1980s Glasgow. Heartbeats per minute more than doubled from an average 70 beforehand to 153 shortly after the ride had begun. Some older riders got uncomfortably close to what would be deemed medically unsafe for their age.

In another adrenalin-boosting pastime, novice bungee jumpers not only reported increased feelings of well-being, wakefulness, and euphoria just after completing a jump, they also had raised levels of endorphins in the blood, well known to produce feelings of intense pleasure. Interestingly, the higher the levels of endorphins that were present, the more euphoric the jumper reported feeling. Here, then, is clear evidence that people enjoy the sensations that accompany the fight or flight response within a non-threatening environment.

And yet, paradoxically, these bungee jumpers also showed increased levels of the hormone cortisol, known to increase when people experience stress. How, then, can a person simultaneously experience stress and pleasure? The answer is that not all stress is bad. Eustress—from the Greek “eu,” meaning good, as in euphoria—is a positive kind of stress that people actively seek out.

We know that a roller coaster ride can be experienced as a “eustressful” experience thanks to an intriguing study carried out by two Dutch psychologists. They were interested in asthma, and specifically its relationship with stress. Having noted previous research findings that stress leads asthma sufferers to perceive their asthma symptoms as more severe, they wondered whether an opposite effect might be possible by applying eustress.

And so, in the name of science, some asthmatic student volunteers were transported to a theme park and rode a roller coaster while their respiratory function was checked. The research findings were remarkable. While lung function predictably reduced from the screaming and general upheaval, so did the feeling of shortness of breath. This suggests that thrill seekers riding roller coasters perceive the experience as stressful in a positive way.

The role of dopamine

But roller coasters are not everybody’s cup of tea. Could differences in brain chemistry explain sensation seeking behaviors? The experiment with bungee jumpers suggest that people with higher levels of endorphins feel higher levels of euphoria. But there is no evidence that resting levels of endorphins might explain sensation seeking, they are more likely a response to the thrill than a predictor of whether we enjoy it.

A recent review instead looked at the role of dopamine, another chemical messenger substance in the brain that is important in the functioning of neurological reward pathways. The review found that individuals who happen to have higher levels of dopamine also score more highly on measures of sensation seeking behaviour. While this is a correlation rather than a causation, another study found that taking a substance called haloperidol, which disrupts dopamine’s effects within the brain, led to a measurable decrease in sensation seeking behaviour.

This line of research sets out the intriguing possibility that enjoyment of intense physical experiences such as riding on roller coasters may reflect individual differences in brain chemistry. People who have higher levels of dopamine may be more prone to a number of sensation seeking behaviors, ranging from harmless roller coaster rides to taking drugs or even shoplifting.

The question as to whether roller coaster riding still appeals as we get older has not been researched directly, but a recent survey looked at how keen people of different ages were on thrill-seeking holidays such as rock climbing trips. It showed that interest in these kinds of holidays peaks in early adulthood, declining with each passing decade. This indicates that older adults are less inclined to participate in activities similar to riding roller coasters. Perhaps experiencing one’s heart rate spiking dangerously close to medically accepted risk levels is not such a draw for the over 50s.

Though hard to pin down, people enjoy roller coasters thanks to a combination of speed, conquering fear, and the positive effects associated with a massive rise in physiological arousal. A roller coaster ride is a legal, generally safe, and relatively cheap means of experiencing a natural high. Understandably, people have been happy to pay money in exchange for doing it for centuries, and there is no sign of any waning in the appreciation of a bit of eustress.

Richard Stephens is a Senior Lecturer in Psychology at Keele University. This article was originally featured on The Conversation.