A Generator That Harnesses Energy From Ocean Currents

A working model of the estimated $5-million device could be ready within a year. 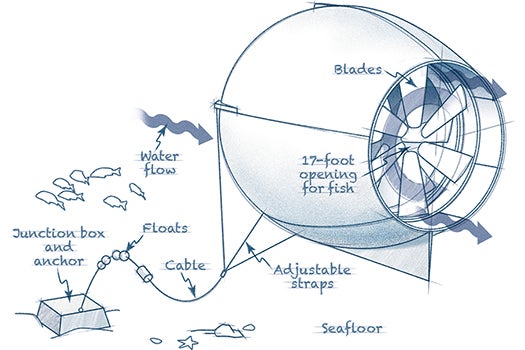 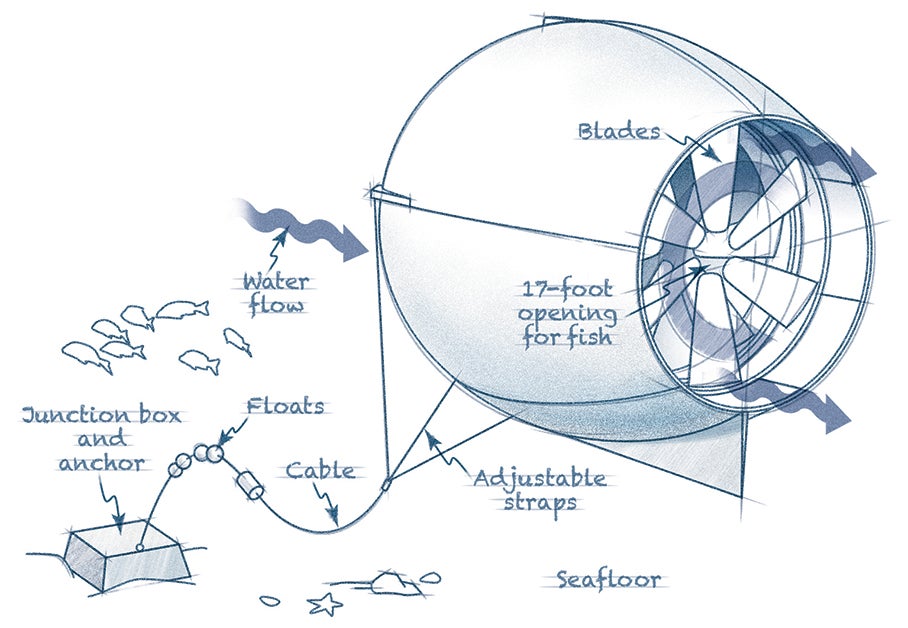 The magic of ocean currents is that they surround every continent on Earth and they run all day, every day. That’s what sets this energy source apart from wind, solar, tidal, or wave—all of which are cyclical, meaning that during certain periods they don’t produce power.

The ocean-current generator we’re planning to build would float 100 to 200 feet below the sea surface. The device is a 65-foot-diameter cylinder shaped to speed up water flow, with propeller blades attached to its frame. As water flows through, it strikes the blades and spins a rotor, which generates electricity. A 17-foot center opening would allow animals to pass through unharmed. We estimate that in the Gulf Stream, a few miles offshore from West Palm Beach, Florida, the five-knot current would turn the blades about eight times per minute, generating about a megawatt of power.

We are designing the turbine to steer itself into the best current so that it generates maximum power, which is principally why our small submersibles manufacturing group, Triton Submarines, is involved. To make the turbine float, we’d create it partly out of syntactic foam, a buoyant material that we can shape easily but won’t collapse under high ocean pressures. The device would be tethered to the seafloor with a cable and adjustable straps that lengthen or shorten to move it in response to onboard water current, depth, and power output sensors.

The cable would then transmit power to a seafloor junction box, which would boost the voltage, convert it from AC to DC, and send it to a collection and distribution center onshore. In the future, we imagine an array of anywhere from 15 to 50 generators working together.

Our goal is to produce a $5-million device, which could pay for itself in five or 10 years. With funding, we could have our first working model within a year.