Scientists Find One Gene Responsible For All White Tigers

And it's our fault that they're super inbred. 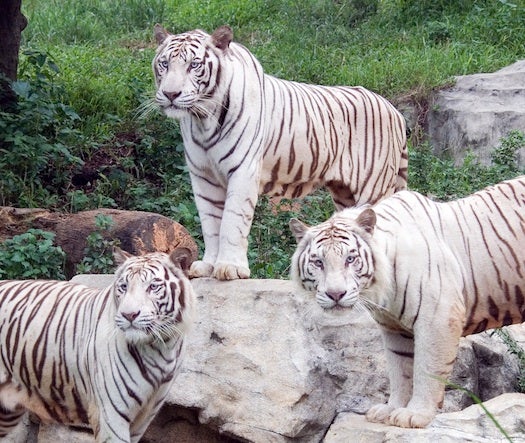 Science may not be totally sure how the tiger got its stripes, but at least they’ve got this figured out. One team of biologists says it has uncovered the genetic mutation responsible for white tigers.

White tigers have black or brown stripes, white fur, blue eyes, pink noses and pink paw pads. They’re not albino, as they have black-brown pigment in their eyes and in their fur. Scientists knew before that their coloring was recessive—”little a” instead of “big A,” for anyone who remembers high school genetics—but little else about how it was inherited.

The new research pinpoints a change in just one place in one gene as the cause of tigers’ white stripes.

To find the gene, the biologists examined a family of tigers living in the Chimelong Safari Park in southern China. The family included an orange female tiger, two white males with whom she mated, and the 13 cubs she bore (Presumably not all at once). Eight of the cubs were orange and five of them were white. The researchers sequenced the genome of the each tiger and looked for genetic variations that appeared in all of, and only in, the white tigers. 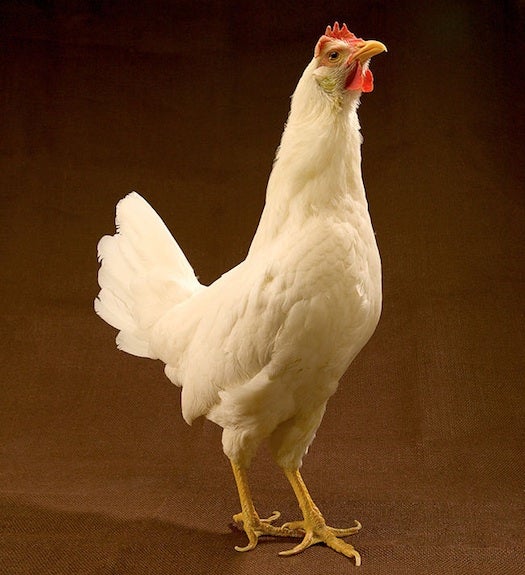 The White Leghorn breed of chicken also has a mutation in the gene SLC45A2.

After continually narrowing their search, they eventually found one gene that seemed to make the difference. Called SLC45A2, the gene appears in several species, including humans. In people, variations in the gene are associated with light skin color in modern Europeans and with one type of albinism people get. In mice, horses, chickens and medaka fish, variations in SLC45A2 are associated with lighter skin or fur. In certain horses and chickens, mutations in SLC45A2 make the animals unable to make yellow-orange pigment, but still able to make black-brown pigment, just like white tigers.

Although they know that SLC45A2 is associated with all of these variously colored animals, scientists don’t know enough yet to say exactly what the gene does that affects pigmentation.

The Chinese biologists were able to come up with some other interesting conclusions. Not much is known about white tigers in the wild because the last known free-ranging white tiger was shot in 1958. The geneticists think white tigers would have done fine in the wild, however, because their coloring is associated with just one gene, mutations in which don’t usually cause other symptoms or problems in humans and chickens. Currently, many white tigers bred in captivity are born with deformities, including crossed eyes, or die prematurely. However, that’s probably because they’re inbred by people eager to make more white tigers, not because of their pigmentation, the researchers wrote.

They published a paper about their work today in the journal Current Biology.