Mystery Animal Contest: Who Is This Big-Eared Wrinklenose? 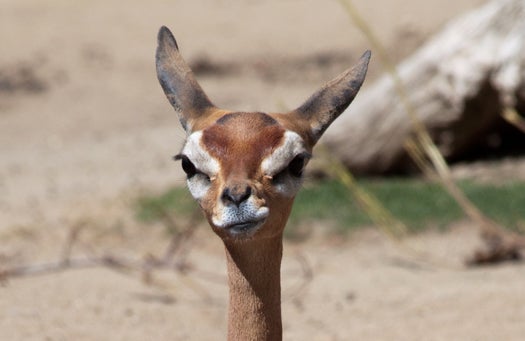 Update: And the winner is…Seth Rosenthal, who, for the second week in a row, correctly guessed the mystery animal first! This creature is a gerenuk, Litocranius walleri, a species of antelope native to the dry brush and scrubland of East Africa. The gerenuk is also called the “long-necked giraffe,” though it is not closely related to the giraffe. In fact, it’s the only member of its genus, so it’s not that closely related to any other species, though it is in the same subfamily as the gazelles.

The gerenuk’s identification with the giraffe comes from both its long neck and its feeding habits. As the gerenuk lives in hot, dry, sparsely-vegetated areas, it has to reach high up to find leaves and twigs to eat–so it stands up on its super-muscled hind legs, reaches its long neck up, and can plug leaves off the acacia tree that gazelles and other antelopes can’t come close to.

Their appearance is adorable and odd; it looks as though they have enormous ears, but in fact their ears are proportional to the rest of the body. It’s the head that’s curiously small. But it’s not a huge animal, only reaching about 41 inches tall.

There are an estimated 95,000 gerenuks in the wild; the species is listed as “Near Threatened,” with habitat loss and fragmentation the key culprits. Hi gerenuk!