How Bats Recognize Friends In The Dark

The ability to recognize individuals by sound helps bats stay connected in the dark. Scroll down for an audio sample. 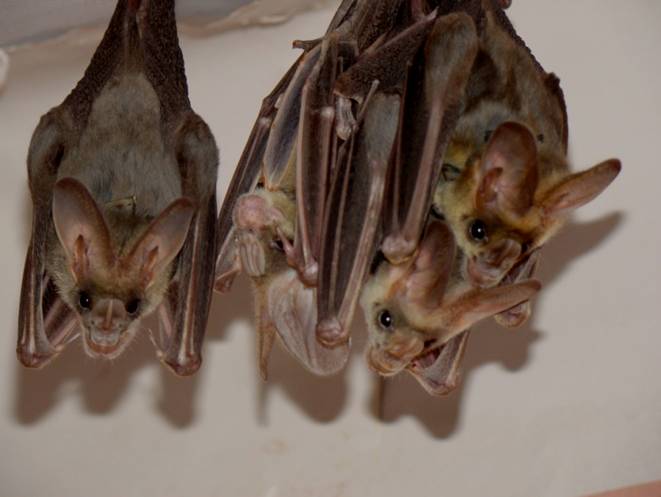 Bats are social animals, developing friendships and raising their young village-style. They also need to communicate like fighter pilots–quickly, specifically and in brief form–so they don’t collide when they’re hunting prey. And they need a way to relocate their social groups in the dark. The combination of these attributes led scientists to wonder whether bats, like humans, can recognize close social contacts based on the sounds of their voices.

Hanna Kastein from the University of Veterinary Medicine in Hannover, Germany, and her colleagues set out to study the the false Vampire bat, Megaderma lyra, and noticed that they perform little individualized “body contacts”–like pals tapping each other on the shoulder. The researchers wanted to see if these bats also recognized each other by voice, and whether this helps them find each other at night.

They took two groups of bats and put them in two separate “flight rooms” for two months. The scientists noted which bats were in frequent contact, and then separated them for up to four hours to see if they’d call each other. They recorded the bats’ name-calling, and then played these recordings to three sets of other, isolated bats: Known body-contact friends, non-body contact friends, and unknown bats from another group. Here’s an example call:

Kastein and colleagues found all the isolated bats turned toward the loudspeakers, apparently yearning for bat companionship. Then the team did a habituation exercise, in which they played repeated calls from one bat, until the test-subject bats started to ignore it. After that, they played a different set of calls. Bats were more likely to respond to a call from an existing friend-bat–a member of their own social group–than a new call from that original, habituation-bat, the researchers found.

This is important, because it suggests the bats noticed something about the sound of the calls that is apparently unique to individuals. They could discriminate among new bats, old bats and new sounds made by old bats.

“Bats are the first mammals for which this close functional relationship between stimulus structure and discrimination behavior has been established. Such a relationship may be relevant for mammals in general,” the researchers write.

Last year, some other German researchers studied bat echolocation calls–which humans can’t hear–and found these, too, contain detailed information about individuals. This vocal signature helps male bats avoid rivals and helps females find their partners, for instance. For bats as well as people, the ability to find your friends in a clamorous crowd can be useful.

The new research appears in the journal Animal Cognition.