Hi friend! Your Linnaean name means "hope." Hope you don't go extinct too soon after we found you! 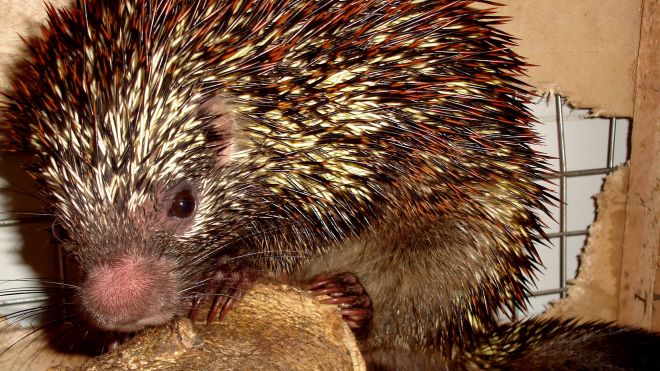 Brazilian porcupines are recognizable as porcupines to us North Americans due to their quills, but they don’t look much like our more familiar North American porcupine otherwise. Their quills are neat and small like a hedgehog’s, they have these goofy protruding fleshy noses, and it’s a superior climber, with a prehensile tail. And now there’s a new species of it!

Coendou speratus, named after the local name for it, was just discovered in a forest along Brazil’s Atlantic coast. It hasn’t been discovered until now for a few reasons; first, it’s pretty rare, with an estimated four per square kilometer distribution in a small corner of one ill-explored Brazilian state. It also looks fairly similar to other Brazilian porcupines, although it’s smaller and tends to live in the mid-level of the forest rather than the canopy.

It’s assumed that the porcupine is endangered. We can’t really be sure, but the chief problem is that this area retains only about 2 percent of its original forest, due to logging and clear-cutting. With that small of a habitat left, it’s likely that Coendou speratus has already suffered some negative effects from inbreeding, though figuring that out can be tricky.