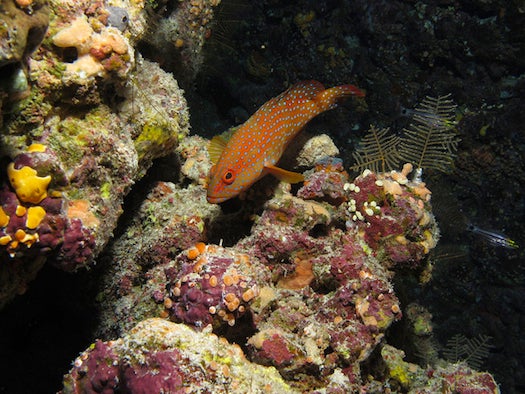 Here’s a nice image for you. Fish swimming through the sea, making little fishy head gestures to communicate with each other. It’s like Finding Nemo, right? Wait! Better: they have little sea creature friends, like an octopus. Charming.

Juuuuuuust kidding. The fish and octopus are murder partners, basically.

A team of scientists studied the hunting habits of various fish and determined that two kinds, grouper and coral trout, use gestures to sick other aquatic creatures on prey. Grouper hunt with giant moray eels or a type of fish called the Napoleon wrasse, while coral trout often hunt with octopuses. It’s like a heist movie where everyone has a specialty: the grouper and coral trout are generally faster, so they can race over to where prey is hiding, while the giant moray eels squeeze into smaller spaces and the wrasses use jaws that can crush coral to get at the prey.

Both types of fish perform what the researchers call a “headstand” signal, alerting the other creatures where the prey is hiding. The team recorded different grouper doing this 34 separate times, and noted that the predator-partners then caught the prey five times (much better than a solo attempt). Still, there’s no honor among criminals: dinner goes to whichever sea creature snags the prey first. The hunted fish can wriggle away from its hiding spot, giving both the hunter fish and the other creature a shot at chowing down.