This Weird Fish Has Clear Blood

Living at 3,300 feet in one of the most inhospitable habitats on Earth, this fish has evolved in a very peculiar way. 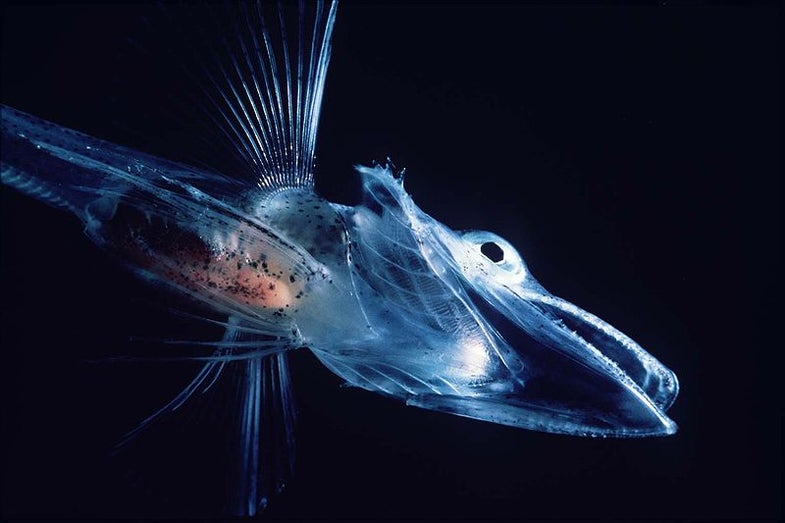 Deep in the Southern Ocean, just off the coast of Antarctica, there lives the Channichthyidae family of fish. These fish are highly unusual, and one of its species, the ocellated icefish (Chionodraco rastrospinosus), was just bred successfully in captivity for the first time.

Deep-sea fish that live near the poles are pretty much exclusively weird; any large-ish animal (the icefish averages about a foot long) that can survive in one of the most extreme environments on the planet is necessarily going to be much different than the animals we see in more hospitable areas. The ocellated icefish, for example, has clear blood. It’s not very well understood how or why this is. The red color of most blood is given by hemoglobin, a protein that carries oxygen along through the bloodstream to the organs that need it.

The ocellated icefish (“ocellated” refers to the eye-like spots that make up the fish’s coloration) does not have any hemoglobin. Its circulatory system gets along without it: oxygen, rather than being transported by the hemoglobin, is fully dissolved in the plasma (the main liquid element of blood). At those cold temperatures, oxygen dissolves into plasma more easily, and the muscles of the fish’s circulatory system are able to absorb oxygen directly from the plasma.

That’s all helped along by the fact that the ocellated icefish has an extremely strong circulatory system. It’s got a much larger and stronger heart than most other fish, and pumps blood through its body at a rate five times greater than the average fish. That, and the fish’s relatively low metabolism, helps make up for the loss in efficiency the fish suffers without hemoglobin.

Krill fishermen brought Tokyo Sea Life Park in Japan a male and female specimen, and a few months ago, the two fish spawned–a world’s first for this species. Having captive specimens will help scientists figure out the most pressing question with the ocellated icefish: we know they can survive without hemoglobin, but why in the world did they evolve this way in the first place?